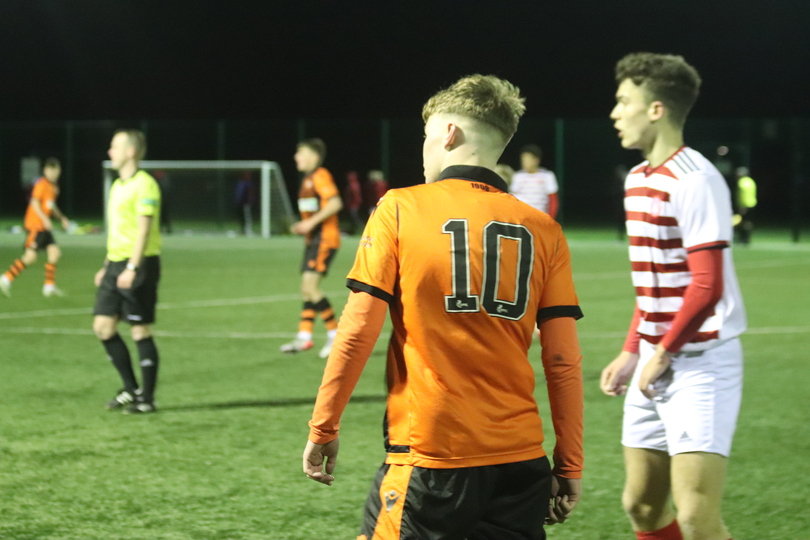 The Young Terrors began 2022 by welcoming Hamilton Academical to the temporary home of Forfar Community Campus for the first match of the CAS Under-18s Elite League after the new year. Last time out, United and Rangers played out a highly entertaining draw at Links Park where Stuart Heenan netted after just eight seconds, the visitors levelling towards the interval through Robbie Ure.

Three changes were made to the side that began the match against Rangers, with 16-year-old Craig Moore returning to U18 duties following his fabulous first-team showing at Ibrox, alongside Jamie McCabe and trialist Finn Reegan.

A couple of clear-cut chances fell to each team as they both failed to find their rhythm in a scrappy opening 15 minutes, with Jacob Comerford sending a free header over the bar from a Rory MacLeod corner before Heenan inadvertently presented Patrick Meechan with a gift, his underhit backpass falling perfectly for the midfielder racing into the area. Luckily for United, McCabe was alert to smother the danger.

Moore forced a strong save from Cameron May on the half-volley after a powerful run from Sam Lovie down the left, then Leyton Bisland’s effort was expertly blocked by Christopher McGinn as he advanced from defence into a positive position.

Despite United having the better of the chances, Accies began to settle into the game and take control through their direct and physical style which caused issues for the tangerine midfield, as well as picking up the majority of second balls through their high intensity press. Arron Donald was called into action after being beaten in a footrace with Myles Gaffney, but recovered well to block the striker’s shot on the slide. The away side were rewarded for being first to find their feet, taking the lead through Meechan after 25 minutes. Cian Newbury sent a deep cross towards the back post which United failed to deal with, the ball dropping for Meechan to calmly side-foot home inside a packed 18-yard box.

The Young Terrors were almost caught napping soon after, Brady Craig’s throw-in into the area for Meechan weakly contested, allowing the 16-year-old to outmuscle Comerford and strike, McCabe once again up to the task of keeping Hamilton out.

Unfortunately for United, another set-piece which was poorly defended proved to be their downfall once more, as MacLeod conceded a penalty in the stramash. Gaffney stepped up to the plate and slammed the ball through McCabe between the sticks.

First-half substitute Fin Malcolm was the recipient of his side’s best opportunity of the first period after falling behind, reacting quickest to Lewis O’Donnell’s in-swinging corner which smacked off the post and miscuing his effort wide from close-range.

After the break, United asserted their dominance on the match as their opponents dropped deeper and deeper to cope with the waves of attack and protect their lead. Eight minutes after the restart, Jacob Comerford blew the game wide open as he met MacLeod’s looping delivery at the back post following a well-worked corner routine involving Moore. The centre-half managed to generate enough power in his header whilst backpedalling to squirm the ball past May at his near-post.

Lovie continued to charge forward down the left and picked out Heenan with a low ball across the area, but the winger wastefully blasted over the bar from 15 yards.

MacLeod’s delivery was again the source of danger for United, his deep free-kick causing chaos in the box with the ball eventually falling the way of Bisland, the defender slashing a left-footed effort wide of the post.

A fabulous ball on the half-volley into the channel by Miller Thomson released MacLeod into space behind the defence. The attacking midfielder cut in onto his weaker left foot and bent a shot around the wrong side of the post with the keeper routed to the spot, time now beginning to tick down for Ryan Moon’s side.

Scotland U17 International O’Donnell then tried his luck from distance after spinning away from Lewis Latona, the ball dipping wide of May’s upright, before he brilliantly teed up Macleod for the long-awaited equaliser deep into stoppage time. O’Donnell found room in the middle of the park to clip a pass towards the advancing MacLeod in the right half-space, who exquisitely lofted the ball over May with his first touch on the angle to claim his fifth goal of the 2021/22 season.

United threw bodies forward in the little time that remained in search of three points but to no avail as Hamilton managed to thunder the ball back up the park as soon as they regained possession.

A poor spectacle overall but an inspired fightback from a resilient Young Terrors to kick-off 2022.