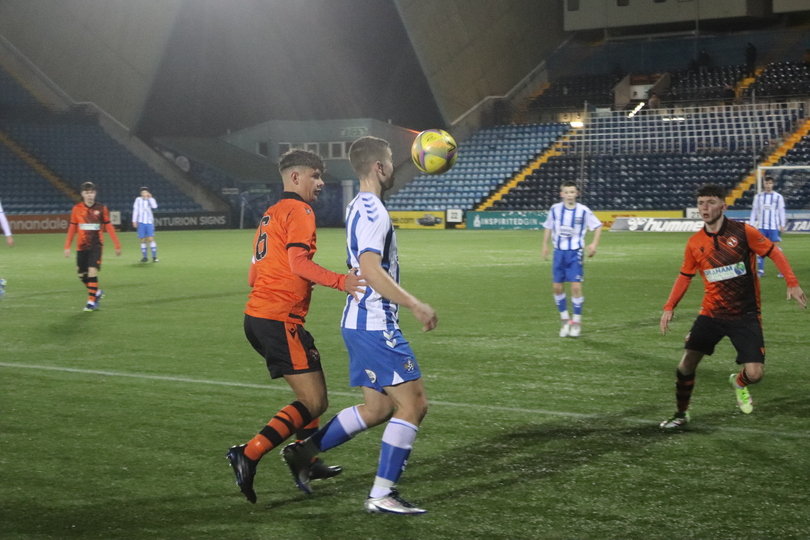 The Young Terrors made the long journey south to Rugby Park to face Kilmarnock, looking to emulate the result of the first-team, a 2-1 Scottish Cup victory thanks to Dylan Levitt’s extra-time winner, from a few weeks prior. The sides have met twice so far this CAS Under-18s Elite League season, United remaining undefeated after a 3-1 away win and 2-2 home draw before the turn of the year.

Just one change was made to the side which drew with Motherwell at Links Park last time out, as Dom Naglik replaced the trialist. Layton Bisland slotted into a more familiar right-back role, replaced by Miller Thomson out wide. United lined up in the trademark 4-2-3-1, their counterparts utilising an unorthodox 3-4-1-2.

Both teams felt each other out tentatively in the opening stages, with United allowed to circulate the ball around their defence looking for a pass into progressive positions, and Killie likewise.

Rory MacLeod thought he’d given his side the lead after a quiet ten minutes, as he rose to steer Layton Bisland’s deflected cross into the bottom corner. However, the attacker was penalised for an apparent foul on Sean Clark.

The hosts' main trait was their intense press from the front, with blue and white shirts swarming around the ball carrier as soon as he took a touch. This led to United frequently having to go long up towards an isolated Naglik who was struggling to challenge the physical trio of defenders.

After 21 minutes, Killie’s hard work paid off as they took the lead. The ball was worked wide to Charlie McArthur on the left who sent a fierce cross into the area which met the head of Bobby Wales making a run across the front-post, Jamie McCabe beaten all ends up by the pace on the delivery.

Wales could’ve doubled his tally for the evening shortly after, Max Conway feeding the midfielder to strike narrowly over the bar from distance.

The goal seemed to spark United into life, with positional rotations in wider regions between Thomson and MacLeod proving difficult for the defence to cope with.

Thomson almost provided the equaliser when he burst away from Andrew Miller and into the area, being perhaps too honest when illegal contact was made, and pulled the ball back for the advancing Stuart Heenan. The winger was agonisingly close to connecting with the cross, but the ball just evaded him. Craig Moore picked up the scraps and sent it back into the box for Heenan to divert wide with his head.

With 40 minutes on the clock, United levelled the scores, Thomson instrumental in both the build-up and finish. The 17-year-old danced away from Conway before spreading the ball wide for Bisland who positioned himself high on the right. Bisland left first-half substitute Kian Leslie for dead and drilled the ball back to Thomson who’d continued his run into the area, and he calmly stroked home into the near-post.

Dangerman Thomson continued to reign terror upon the backline, this time rampaging his way to the edge of the area and cannoning his strike off the keeper’s right post.

Killie hit back, Jamie Kirkpatrick bundling his way into the box and thumping a venomous effort into the side-netting.

There was still time for one more chance in the first 45, Naglik rolling the ball into the feet of MacLeod who dragged a left-footed shot a yard past the upright with Aiden Glavin rooted to the spot.

After the break, the Young Terrors allowed the game to slip away from them within 120 seconds. From kick-off, McArthur sent one into the channel for Mulvanny to latch onto, fighting off the advances of Jacob Comerford and sneaking the ball past McCabe to restore his side’s lead. Then Bobby Wales added his second of the match, trying his luck from the D with the shot taking a cruel deflection off Arron Donald and spinning beyond the ‘keeper to double the Killie advantage.

Craig Clark’s men probably should’ve killed the match completely when Conway went one-on-one with McCabe after Leslie’s pass was dummied by Mulvanny, leaving the ball to trundle all the way through to the onrushing wingback. Conway rounded the United stopper and eventually pulled the trigger, but by the time he did Sam Lovie had made up ground to block his goal-bound effort.

United continued to be careless with the ball, especially in the final third when they began to break the press as the match continued with their opponents tiring, numerical overloads not capitalised on due to sloppy passes and touches, allowing Kilmarnock to break.

It took until the 82nd minute for the visitors to carve out a clear-cut opportunity, with Thomson finding the feet of substitute Alan Domeracki who sent a first-time lay-off to Moore, the 16-year-old unable to beat Glavin from point-blank range as his right-footed shot rebounded off the keeper’s foot.

The Ayrshire men failed to add to their advantage in the closing stages despite going close, Mulvanny riding the challenge of both Donald and Lovie and seeing his inviting ball across the area cleared to safety by Bisland as well as Jamie Kirkpatrick blowing a one-on-one with McCabe after cutting inside two sliding challenges but eventually being dispossessed by Keir Bertie.

The Young Terrors left with too big a mountain to climb after a slow start to the second period despite a flurry of chances just before the interval. Next up for Ryan Moon’s side is a home clash with Celtic.