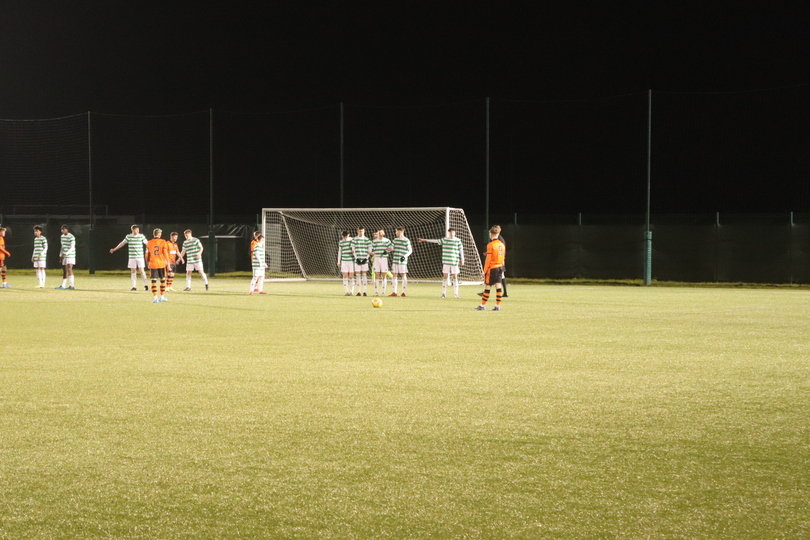 The Young Terrors travelled to Celtic’s training facility at Lennoxtown in the hopes of battling Celtic and the elements to claim three points in the CAS Under-18s Elite League. Last week, United were left rueing missed chances as they succumbed to a quickfire Kilmarnock double after the break, conceding twice in two minutes as the game slipped from their grasp.

As well as making three changes to the side which were defeated in Ayrshire seven days prior, Ryan Moon also tweaked the system with Lewis O’Donnell, usually deployed in midfield, slotting into the centre of a back five. Attacking midfielder Miller Thomson, who signed a new contract this week, also displayed his versatility as he began as a right-wing back.

Despite enjoying little possession in the early stages, United were gifted a golden opportunity on five minutes when Magnus MacKenzie strolled out of defence and passed the ball straight to Stuart Heenan. The winger raced towards goal and pulled the trigger just as he crossed the line into the box but failed to beat keeper Kai McLean with his low, right-footed effort.

Celtic then retaliated by going straight up the other end and creating a clear-cut chance of their own, Jude Bonnar picking out Benny-Jackson Luyeye at the back post who’d made up ground from right back. He rose highest to power the ball towards goal but Jamie McCabe produced a stunning reaction save to deny the Hoops defender.

United began to enjoy sustained possession with their opponents often looking to attack too swiftly, resulting in high ball turnover. The Young Terrors managed to keep composed with the ball and look to build attacks slowly, utilising the width that wing-backs Sam Lovie and Thomson provided.

Heenan was at the heart of the action once more as he picked up the ball on the right and drove along the area, before teeing up diminutive midfielder Keir Bertie who struck a first-time strike straight at McLean.

Rory MacLeod has made headlines this week as he became the youngest ever player to pull on a tangerine shirt and, on his return to the U18s, he was instrumental in the game’s opening goal. The 16-year-old used his blistering pace to leave Lenny Agbaire for dead and race to the byline, eventually drilling the ball across the box for his colleague Heenan to collect, swivel and slam home off the bar from eight yards to give United a deserved lead after 15 minutes.

The little positive attacking signs Celtic showed all seemed to flow through Frankie Deane in the number eight role, collecting the ball in the half-spaces and looking to spread play into the wider regions. Kyle Ure also ghosted across the deeper areas of midfield and kept play ticking over nicely. Shortly after the tangerine opener, Deane went close with a shot from distance and then played Colby Donovan in with a perfectly-weighted pass. Luckily for United, the Hoops right-winger lost his composure at the crucial moment and wastefully hacked the ball well wide of McCabe’s goal.

MacLeod and Heenan almost combined effectively once more on the 40th minute when the former dropped deep to pick up the ball and find the latter with a dinked pass over the defence, with Heenan plucking it out the sky exceptionally. Unfortunately, Agbaire managed to recover and put in a vital sliding challenge before he could get his shot away.

United continued to press, Lovie’s teasing delivery glanced narrowly wide of his own post by Ure in the middle, then MacLeod’s corner was headed clear only as far as O’Donnell who sent his volley skidding inches wide off the wet surface.

On the stroke of half-time, Agbaire met McCabe’s clearance strongly, with the ball running all the way through to Lewis Dobbie. The number nine found himself one-on-one with the keeper and, under little pressure, skied his effort a considerable distance over the bar.

After the interval, Bertie sent an inch-perfect cross onto the head of Heenan in the middle who leaped powerfully but failed to keep it under the bar.

Bertie then found himself in trouble with the referee, being penalised for an elbow on a Celtic player on the 53rd minute, with the man in the middle left with no option but to give the United man his marching orders.

Merely 60 seconds later, things went from bad to worse for Moon’s side as Celtic levelled the scores. Ure received the ball 15 yards inside the Celtic half with time to turn and launch it forward over the head of Comerford for Bonnar to latch onto and slam past McCabe on his left foot.

Bonnar almost turned provider as his corner was met by the head of Ure at the front post but his goal-bound effort cannoned back off a green and white shirt, luckily for United.

McCabe produced more heroics just after the hour mark when he thwarted Bonnar with a fabulous, one-handed save. Ure found Aiden Cannon in the right channel and he darted into the area before pulling the ball back for Bonnar to whip towards the top left corner, United’s number one throwing his glove out to divert it over for a corner.

The Young Terrors understandably had to drop deeper to cope with being a man down for such a prolonged period of time, but kept fighting each other’s corner and covering every blade of grass to maintain their harsh press. This restricted Celtic to having just one half-chance in the closing stages, Donovan’s cross finding the unmarked Mitchell Frame in the box for the substitute to bullet well over the bar.

United could’ve nicked it with less than ten to play, Dom Naglik agonisingly close to meeting Heenan’s left-footed cutback on the slide.

A well-deserved point for United in the driving rain as their incredible work rate payed off to frustrate Celtic’s chance creation in the second half. Next up, a trip to Aberdeen on Tuesday evening for a New Firm U18s clash.