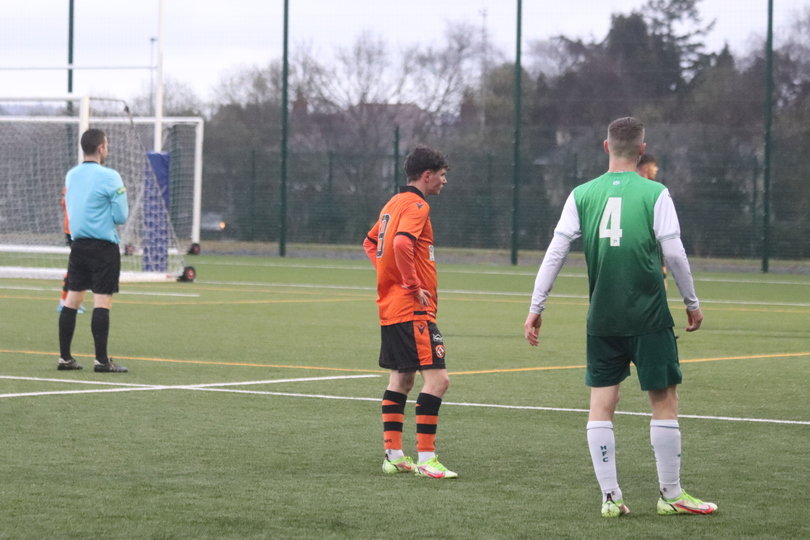 The Young Terrors hosted Hibernian at the Regional Performance Centre, still searching for their first win of the calendar year.

Ryan Moon made three changes to the side which were defeated at Auchenhowie, as Greg Petrie, Craig Moore and Keir Bertie replaced Sean Borland, Adam Carnwath and Alan Domeracki. A 5-1-2-2 was preferred to the 4-3-3 utilised against Rangers, the little and large combination of Stuart Heenan and Dom Naglik leading the line ahead of midfield duo Lewis O’Donnell and Moore.

A frenetic opening ten minutes culminated with the first chance falling to the visitors, Josh O’Connor escaping the clutches of Sam Lovie on the right and backheeling the ball into Malek Zaid. The midfielder burst into the area powerfully and his cutback found Connor Young who took a touch beyond Arron Donald before going for goal, the ball saved by the feet of Young Terrors stopper Jamie McCabe.

An important intervention from Lovie prevented the Hibees from taking the lead on 17 minutes, as he cleared Oscar MacIntyre’s firmly-struck effort off the line after the full-back had beaten Petrie on the left of the area.

A Naglik knockdown proved the source of the next chance for the hosts, teeing up O’Donnell for a snapshot that slid wide of Tom Carter’s right-hand post.

Young went close with an intelligently dinked indirect free-kick from seven yards, thwarted only by the head of Petrie.

With 24 minutes on the clock, Young’s persistence paid off as he opened the scoring in slightly fortunate fashion. O’Connor sped down the right and drilled a shot on target which was parried away by McCabe, but the rebound dropped for the 17-year-old on the edge of the box and his first-time strike took a cruel deflection off Bertie and found the top corner.

The green dominance continued with an incredible miss from Murray Aiken, the number seven bouncing Zaid’s delivery wide from eight yards with the goal at his mercy.

United struggled to progress the ball into attacking areas due to the well-organised midfield shape they faced when looking to build from the back, and found themselves exposed in the channels, particularly in the space between the wider centre-backs and wing-backs where Hibs deployed their wingers.

If the first goal was fortuitous, the second was anything but. Young received the ball on the left of the box and found himself one on one with Petrie. He then sharply shifted the ball onto his preferred left foot and thundered an unstoppable strike beyond the despairing dive of McCabe and into the far corner to double his side’s lead after 34 minutes.

O’Connor’s curling effort cracked off the top of the bar after a loose pass from Naglik, before things went from bad to worse for the Young Terrors as Young completed his hat trick, in emphatic fashion once again. McIntyre collected an overhit cross and stroked the ball back to his teammate positioned behind him, and the midfielder viciously whipped his shot into the top right corner to effectively kill the match as a contest with just 38 minutes played.

The run of play continued to flow towards the United net after the break, Young this time almost turning provider as he dispossessed McCabe who found himself in all kinds of trouble after dithering on the ball. O’Connor looked to have a tap in as he was teed up by his colleague but miscued his side-footed effort from just behind the penalty spot.

On the hour mark, the visitors added a fourth, this time a spot-kick the source. Young darted into the box and drew a mistimed challenge out of Petrie as the defender scythed his opponent down next to the by-line, with O’Connor confidently converting low into the net.

Substitute Rudi Molotnikov got in on the act just four minutes later, entering the box under little pressure and finding the far corner with a well-placed finish.

The pick of the bunch for the Leith side was perhaps their final goal, Freddie Wylie powerfully side-footing the ball into the postage stamp from more than 30 yards after a half-clearance from a tangerine shirt, McCabe unable to keep it out despite getting a hand to the shot.

The final chance fell to United, full-back Layton Bisland picking up the pieces of a Reece Kerrigan cross and blasting over Carter’s crossbar under pressure from Kenayo Megwa.

A night to forget for an out of sorts United who have the chance to right the wrongs quickly on Friday night as they travel to Lanarkshire to face Hamilton Accies.