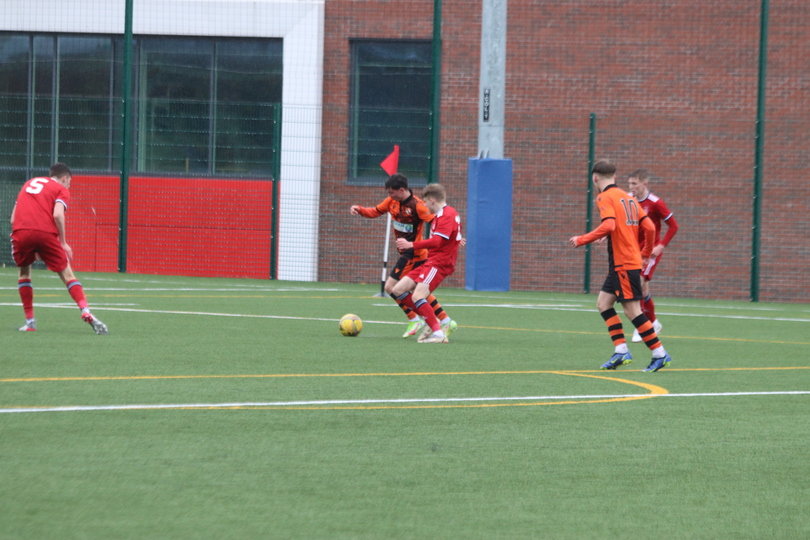 The Young Terrors were back in action at the RPC as they hosted Aberdeen in a Tuesday afternoon New Firm clash.

Five changes were made to the side which were beaten by Hamilton on Friday night, with midfield duo Lewis O’Donnell and Craig Moore returning whilst goalkeeper Jamie McCabe dropped out for Ruaridh Adams between the sticks. There was also space on the bench for 2007-born Owen Stirton and Tiylar Low, alongside 2006 trio Alan Domeracki, Sean Borland and Keir Bertie.

United began the match in a 4-2-3-1 with Stuart Heenan and Reece Kerrigan playing as narrow wingers to allow space for Layton Bisland and Sam Lovie to overlap beyond them. Rory MacLeod and Dom Naglik then looked to link up in the central areas as the former dropped into the space between the visitors’ midfield and defence.

The first chance of the match fell the way of the Dons, Adams forced to react quickly to a whipped effort from Cameron Wilson which took a deflection on its way towards the target.

United began to take control of proceedings around the ten-minute mark, with O’Donnell instrumental in all positive happenings for his side. The Scotland under-17 international looked to pick up the ball deep in his own half and distribute into the wider areas with cross-field passes which almost always found their intended target. A raking pass from O’Donnell eventually dropped to Dom Naglik who fed Kerrigan at the left-hand side of the penalty area, his shot taking a nick off a red shirt and saved well by Blessing Oluyemi.

A flowing team move almost created the opener soon after, Adams clipping the ball over Aberdeen’s press to Bisland who in turn switched to Kerrigan. The 15-year-old found MacLeod on the overlap and, his teasing cross along the six-yard line unable to find a teammate.

Aberdeen hit back as Wilson rattled the post with a bending strike from just outside the area after a fiercely contested 50-50 between Aaron Donald and Adam Emslie.

With 30 minutes on the clock, the Young Terror’s dominance would eventually pay off and in emphatic fashion. Bisland cut in from the right and rolled the ball square to MacLeod before the 16-year-old took a touch out of his feet and picked out the top corner with a stunning strike from more than 25 yards, his sixth goal of the season.

MacLeod could’ve added a second with five minutes until the break, peeling off his marker in the box and connecting with O’Donnell’s low delivery from the left but the ball awkwardly spun up and over the bar.

The last opportunity of the half fell to the away side, as Liam Harvey picked up the pieces of a stramash in the area and blazed his right-footed shot well over from close-range.

The match continued to entertain after the interval, and it took just three minutes for United to double their advantage. Bisland and MacLeod combined once again as the former picked out the latter with a drilled cross. MacLeod nipped the ball off the toes of his colleague and spun away from Blair Mckenzie sharply and rolled his precise shot into the bottom corner past Oluyemi.

However, Ryan Moon’s side conceded almost instantly after the restart just as they did against Hamilton on Friday. Dylan Lobban advanced into the United half and fed Harvey to the right who struck low across Adams to revive Aberdeen’s chances of taking something from the match.

The Granite City side were almost the architects of their own downfall as Kai Watson’s short back pass was capitalised on by Naglik, but the striker’s effort from an acute angle was smothered by the alert Oluyemi.

Bisland’s final product continued to cause problems for the visitors, this time the 18-year-old picking out Stuart Heenan on 69 minutes. His front post run saw him burst away from McKenzie, unfortunately the diminutive winger failed to keep his shot down from point-blank range though.

Then a speculative ball from Sam Lovie at left-back set Heenan free in behind the high Aberdeen defensive line and he opted to shoot early, his strike eventually trundling wide of the upright.

The Dons began to press for an equaliser as the clock ticked down, and only an important intervention from Donald prevented them from doing so. Lobban nicked a 50-50 duel away from O’Donnell in the centre circle and strode forward towards the box. He then teed up Emslie to his left and his whipped shot which looked to be dropping into the far corner was blocked by the recovering defender’s head.

A route one ball from McKenzie dropped to Harvey who went for a first-time dink over Adams who found himself in no-man’s land. Luckily his audacious effort dropped the right side of the post from a tangerine point of view.

With just five minutes left to play, MacLeod wrapped up the three points and his hat trick. Heenan looked to latch onto a pass from Borland in behind, but Oluyemi raced off his line to confront him. The keeper hit the deck to claim the ball and referee George Ander deemed he had strayed out of his penalty box. MacLeod stepped up 18 yards out and thundered the set-piece through the wall and beyond the unsighted keeper.

The referee’s whistle sounded soon after a half-chance for Emslie to hand the Young Terrors their first win of 2022 and push them up to fifth in the CAS Under-18s Elite League table at the expense of Kilmarnock, coincidentally their opponents this Friday at St Andrews.