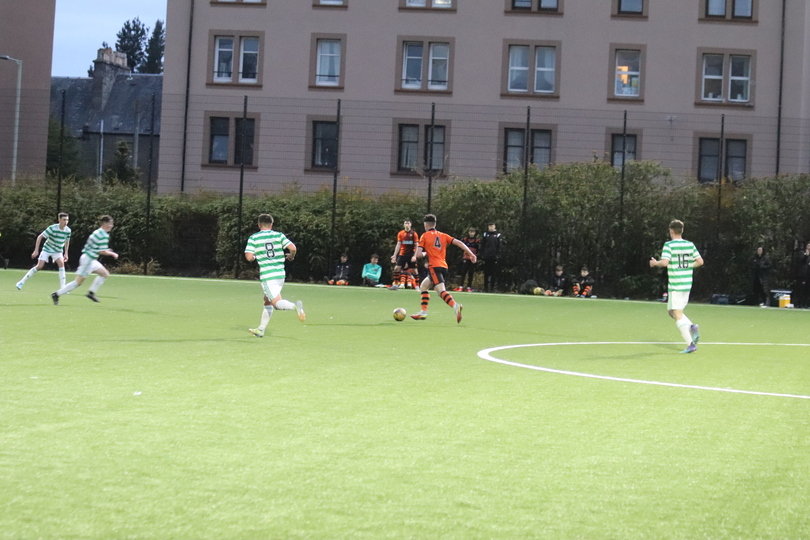 The Young Terrors’ clash with Celtic formed the grand reopening of Gussie Park following the first phase of its £300,000 renovation being completed, the first match on the newly laid 4G surface opposite Tannadice.

No fewer than eleven goals were scored in the last outing for Ryan Moon’s side, as they conceded a cruel last-minute penalty to go down 5-6 to Heart of Midlothian at the RPC, Rory MacLeod, Stuart Heenan and Lewis O’Donnell all on target for United in a thrilling contest between two attack-minded teams.

After such an impressive display on Friday, the solitary one change from the head coach was understandable, Layton Bisland returning at right-back as midfielder Sean Borland dropped to the bench. United begun in a 4-4-2, with wingers Miller Thomson and Adam Carnwath inverting when the full backs were bursting forward to offer central options when looking to structure attacks.

The game started slowly, as both teams attempted to probe each other for weak spots. The hosts were wasteful in their distribution from defence, yet a well-organised high line limited Celtic chances.

The Glasgow outfit’s ruthlessness though was laid bare in the 19th minute when they opened the scoring with their first sighting of goal. Jacob Comerford’s attempted clearance cannoned back off a green and white shirt into the path of Corey Thomson who burst into the area and rifled an unstoppable effort across Ruiaridh Adams into the top corner.

Rory MacLeod stood over a free-kick 20 yards from goal, conceded by Kyle Ure after nifty footwork from Stuart Heenan, but the 16-year-old thundered the ball narrowly over Kai McLean’s crossbar in the only other action of note in the first half.

Whilst chances were hard to come by before the break, they were well and truly flowing after the restart, and flowing mainly towards the Celtic goal.

Craig Moore was instrumental in two quickfire chances for the Young Terrors, first intercepting a stray Alasdair Davidson pass from the back and feeding Heenan whose 22-yard shot troubled McLean, the keeper spilling the ball untidily to concede a corner, and then going for goal himself but failing to find the target from range.

Just two minutes later, Bisland danced into the area but couldn’t connect properly with the ball as he stretched to strike, sending it well wide of the target.

At the other end, Bonnar looked to pick out Eseosa Sule in the middle and found his teammate but the striker’s shot on the slide flew over the newly installed fences.

United were turning up the heat on their opponents, MacLeod played through one-on-one neatly by Carnwath but unable to beat McLean as he looked to strike back across the keeper.

The pressure would tell for Moon’s men just before the hour mark as they got a deserved equaliser. Bisland forced a turnover with tenacious pressing in the right corner, the ball breaking the way of Heenan who sent a tantalising cross in the direction of MacLeod and he pounced to touch home from three yards and continue his red-hot scoring streak.

Back on defensive duties, a crucial block from Arron Donald thwarted Thomas Hatton’s well-struck attempt inside the area.

McLean once again saved his side after a flowing move from United down the left which involved Keir Bertie, MacLeod and Heenan, culminating in the latter collecting a low cross and forcing the 17-year-old into action at his near post.

Carnwath, who found himself deployed in the number ten role rather than out wide, was the architect of a tangerine sighting of goal on 70 minutes, jinking beyond no fewer than three challenges in the middle and finding Bisland wide on the right. The full-back chopped inside Bonnar onto his left foot but fired his low shot from an acute angle straight at Mclean between the sticks.

Adams almost inadvertently set up Hatton when he failed to put the requisite power and height required on his kick to find Bertie at left back, the Celtic number seven picking up the loose ball before darting into the area and drilling into the side-netting

Celtic delivered the sucker punch with just eight minutes left for United to recover, as the unmarked Evan Easton rose highest in the area to meet Bonnar’s corner and send a looping header over Adams at the back post.

The Hoops’ game management following their goal was exemplary, as they managed to close out the game by surrendering no further chances for United to get themselves back on level terms.

The Young Terrors with plenty of second-half chances to put themselves out of sight but made to pay for their capitalise on the multitude of chances they created. On the other hand, Celtic soaked up the United pressure admirably and were clinical in front of goal, which in the end was the difference between the sides.