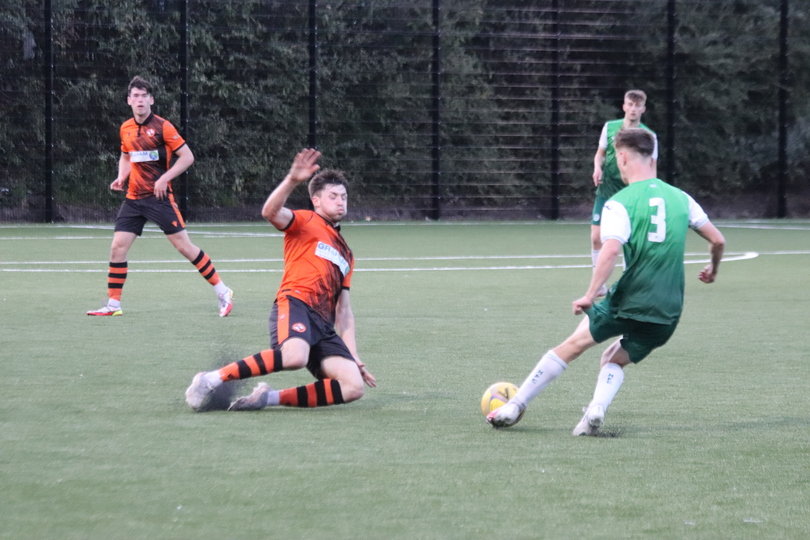 Ryan Moon’s Young Terrors were in action at home for the final time of the 2021/22 season as they faced Hibernian for the third time in six weeks.

The 18s ran the Hibees close last time, Rory MacLeod opening the scoring inside the opening ten minutes before a soft penalty and a lapse in concentration led to the hosts taking a 2-1 victory at the HTC.

Ruiaridh Adams and Josh Swain were introduced to the Young Terrors starting XI as Jamie McCabe and top scorer MacLeod made way. United once again formed a 4-4-2 as Stuart Heenan and recent addition Adam Carnwath led the line, aided by support in the wide areas from Josh Swain and Miller Thomson.

It was one-way traffic from the off heading towards the United goal, as Hibernian looked to exploit their physical advantage over a youthful Young Terrors side just as they did at the HTC in April. The ball was frequently launched in the direction of lone striker Connor Young with Robbie Hamilton and Malek Zaid picking up the scraps and distributing into the wider regions.

Rudi Molotnikov was first to try his luck after pouncing on a second ball as he sent a curling effort towards the far post which Adams sprung across his goal to turn round the post.

The visitors went close again after 12 minutes as Jacob MacIntyre drove beyond Keir Bertie into the box and picked out Hamilton whose first-time effort which looked to be finding the bottom corner was brilliantly deflected over the top by the brave Arron Donald.

United finally strayed out of their own half ten minutes later when a pinpoint Carnwath ball over the top fell perfectly at the feet of Thomson to collect and burst forward. The 17-year-old had Heenan in support with just one covering Hibs defender but failed to pick out his Young Terrors colleague as his attempted cross was mishit.

Hibs continued to threaten at the other end, this time dead-ball specialist Young sending a 30-yard free-kick inches over Adam’s crossbar.

Despite the Easter Road outfit’s early dominance, it was to be United who broke the deadlock with 34 minutes down. Thomson picked up a tight pocket of space just outside the area before finding Heenan making a run in behind. The winger returned the ball to the feet of his teammate Thomson and he steered the ball coolly into the near-post from 17 yards to give his side the lead against the run of play.

After the break, set-pieces were the theme as United were forced to defend cross after cross into their penalty area. MacKenzie Weir met Young’s corner from the left and powered it just wide of the target when he was left unmarked in the middle.

MacIntyre then had swerving effort from range which dipped the wrong side of the post from a green and white perspective with Adams rooted to the spot.

As United remained under the cosh from a physically imposing away side, they looked to use the pace of Heenan and the intelligence of Thomson on the counter, and they doubled their lead through this on the 68thminute. Thomson raced down the left to collect the ball before picking out Lewis O’Donnell making up ground from midfield who bulleted his header straight at Hibs keeper Murray Johnson from point-blank range. However, the rebound dropped to opportunist Heenan who smashed into the roof of the net from seven yards to give the Young Terrors a smash-and-grab two-goal buffer.

Hibs looked to have pulled a one back when Hamilton’s header from Oscar MacIntyre’s cross was clawed away by Adams with the visitors screaming that the ball had crossed the line, no goal said the referee though.

Another Hamilton header forced a fabulous save from Adams as he leaped sharply to paw the ball over the top of the bar after the striker connected with a MacIntyre delivery yet again.

However, Gareth Evans’ side finally got on the scoresheet with nine to play when Weir diverted the ball into the bottom left corner from a set-piece from the right.

It was two in quick succession for Hibernian as the Young Terrors allowed the game to slip away from them in three minutes. Hamilton latched onto a Young flick-on before being upended by Adams, with the referee showing absolutely no hesitation in pointing to the spot. Young stepped up to the plate and slotted home low to the left to earn a point for his side.