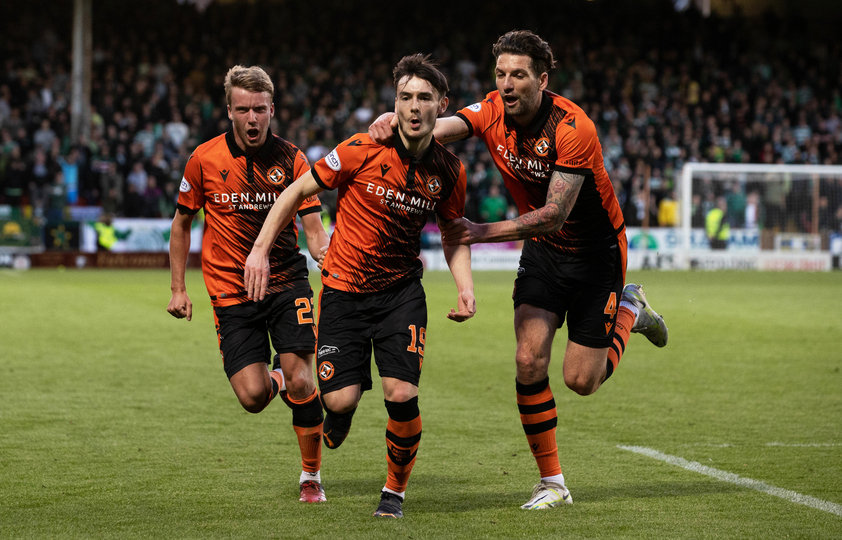 United’s last home game of the 2021/22 campaign had huge importance for both sides, with the Terrors able to seal Europa Conference League football with a victory and the visitors, Celtic, on the brink of clinching the title – a point enough for Ange Postecoglou’s side.

The 2014/15 season brought our last win over the Hoops, as goals in either half from Nadir Ciftci and Stuart Armstrong saw us close the gap on Celtic at the top of the table, 2-1 the final score in a festive cracker at Tannadice.

Gaffer Tam Courts rung the changes after a disappointing performance at Ibrox just three days ago, five alterations made to the XI including 16-year-old Rory MacLeod, who became our youngest ever player after entering the fray in stoppage time against Motherwell in February six days after his birthday, started up top with the experienced Nicky Clark.

United formed a 5-4-1 when looking to nullify Celtic’s attacking threat, as MacLeod dropped on to Callum McGregor to cut the vertical passing lane to the Glasgow outfit’s skipper and maverick Ilmari Niskanen acted as a one-man press with his tenacious work-rate. Dylan Levitt and Archie Meekison flanked veteran midfielder and Scotland international Kevin McDonald, whilst Scott McMann and Liam Smith were deployed on the left and right of central defender Ryan Edwards respectively.

The early stages saw Celtic predictably dominate the ball, but they struggled to force clear sightings of goal.

A short-corner routine saw Matt O’Reilly squeeze past Freeman at the byline before pulling the ball back to former United defender Anthony Ralston who scooped his effort over the bar from close range.

James Forrest wriggled into the United box on seven minutes after combining nicely with Liel Abada, then found his right-footed effort blocked by the knee of Smith.

On the half-hour mark, Giakoumakis received the ball after a clever dummy from Hatate who continued his run into the area to collect it from his Greek colleague before blasting past the post as he bore down on Benji Siegrist’s goal.

United had an opportunity of their own as the game approached the break, a sweeping move from right to left saw Freeman find Meekison and his nifty footwork bought him space inside the box to go for goal but the Academy graduate narrowly missed the target with a curling shot with Joe Hart rooted to the spot.

After the interval, it only took Celtic eight minutes to break the deadlock as their relentless pressure eventually told. Abada drifted wide and collected the ball before stroking it into the feet of Ralston. The full-back burst towards the line and clipped a perfect cross onto the head of Giakoumakis who bulleted it through Siegrist’s hands from point-blank range.

Rather than retreat further, going a goal behind galvanised a defiant United, who went for the jugular directly from the off. Smith’s channel ball was latched onto by Clark who was bundled over by Starfelt, no foul according to referee Nick Walsh. The United striker picked himself up quickly to collect the loose ball from the challenge and had MacLeod in support. The Young Terrors star received just outside the box and then pulled the trigger, his effort ricocheting back off the post and falling kindly to Clark who lofted it into the empty net. However, the linesman’s flag cut the tangerine celebrations short under dubious circumstances.

A scramble in the box followed with Hart in no man's land, the former England number one eventually punching Watt’s bouncing volley to safety.

United hit the woodwork once more with 62 minutes down, Freeman’s cross met by Watt and his trundling header rebounded agonisingly back off the post, with Niskanen unable to force the ball over the line under pressure from Reo Hatate to the left of the upright.

Celtic finally responded, substitute Jota skipping past the challenge of Freeman and Meekison and then looking to find the near-post with a fierce effort which was met by a wonderful, one-handed save by Siegrist. Soon after, Tom Rogic burst beyond the United midfield and found Giakoumakis advancing towards goal, the imposing striker controlling on the penalty spot and sending a low strike inches wide of the post.

16 minutes to play and the Terrors got a deserved equaliser, Levitt once again producing magic. Substitute Charlie Mulgrew had possession 30 yards from goal and rolled the ball to his right to the Welshman who took a touch out of his feet before thundering an outrageous, dipping strike into the bottom left corner past the despairing dive of Hart.

The Hoops turned up the heat as they looked to find the goal which would make sure the title headed to Parkhead. Rogic was at the heart of the action when he set Jota free in behind, the Portuguese driving towards goal and drilling the ball into the side-netting, then Greg Taylor found Daizen Maeda in the middle and his first-time shot fizzed just past the far post.

There was still time for one more chance at the other end, a wide Levitt freekick collected by Freeman at the back post and recycled into the area. McMann went for the spectacular and his miscue was met by Edwards on the stretch, but the skipper couldn’t head home from two yards.

The final whistle sounded after four nervy minutes of stoppage time for both sides, United securing European football for the first time since 2012/13 as results elsewhere went in our favour. The last match of the season takes place in Dingwall in front of a sold-out away crowd as we look to secure fourth place at the expense of Motherwell who face champions Celtic at Parkhead