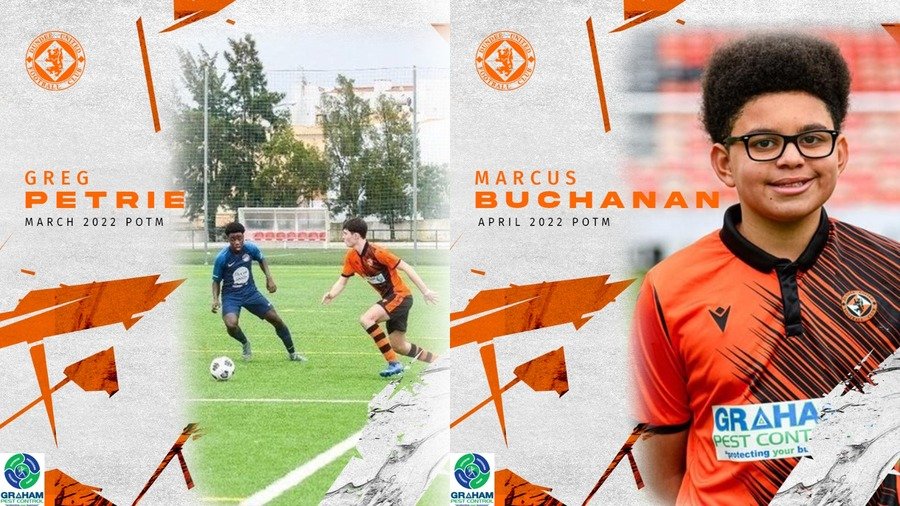 We are delighted to confirm Young Terrors defender Greg Petrie has been awarded the Graham Pest Control Academy Player of the Month for March and U14s defender Marcus Buchanan for April.

Greg recently made the step up to Ryan Moon’s U18s squad who sit mid-table in the CAS Elite League with games in hand on those above them, and impressed as part of the youthful side which competed with top European clubs such as Benfica, Malaga and Real Betis in the Algarve Cup last month. The ball-playing centre-half has experienced a torrid last 18 months, plagued with injuries and setbacks, yet has transitioned seamlessly into playing football beyond his years.

Paul Cowie, Head of Academy Coaching, praised the 15-year-old’s journey to thriving within the Academy setup.

“Greg has shown an unbelievable amount of resilience over the last 12 months, where he has had several setbacks to deal with. However, with the clubs support, he has always remained positive and focused to comeback stronger which is real testament of his character and attitude.

All the coaching staff and players are delighted to see him back playing well in both the Under 17s and Under 18s but it’s now time to kick on and keep developing for the remainder of the season.”

Marcus enjoyed a strong run of form in Portugal also, starring in the Iber Cup side which made the last 16, eventually being defeated by Portuguese giants SL Benfica 1-0.

Position Development Coach Analyst Andrew Steeves hailed the central defender's recent development, saying "During April, Marcus has shown consistent dominant displays at centre back on his preferred right side, on his opposite left side and also and the central player in a back 3 showing fantastic adaptability for someone his age.

"His use of the ball from all 3 positions has been of great quality and is now starting to show real leadership qualities within his own age group as well as bringing his strong personality to the age group above which he has earned a lot of playing time in recently.

"Marcus went through one of his growth spurts last year which was a challenging time for him but has bounced back in the first 1/4 of this year brilliant which is the resilience we look for from our Academy players.

The coaches have been delighted with how Marcus has been training and developing lately which has made him a pleasure to work with."