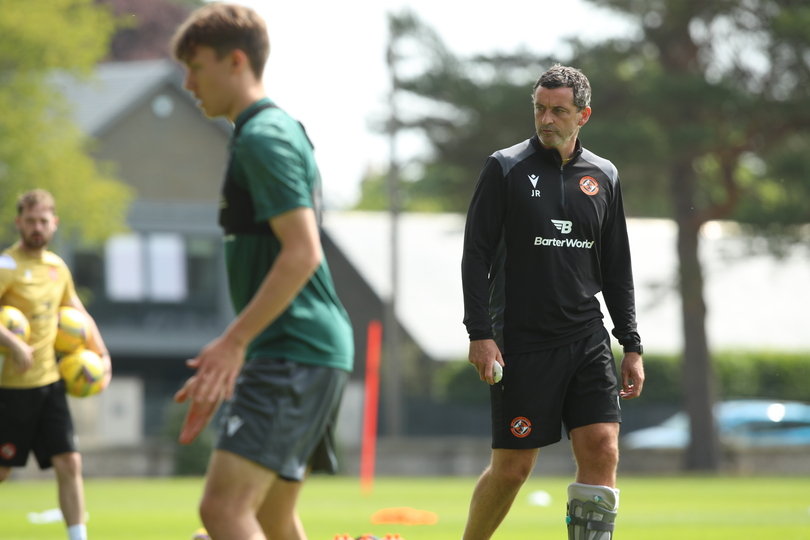 Jack Ross has revealed the secret behind the shorts at his unveiling press conference.

Jack met the media on Wednesday after he was appointed on a two-year deal as Dundee United Head Coach earlier this week.

His unveiling images quickly caught the eye of fans online for his suit jacket and shorts combination.

????Jack speaks to the press for the first time as Dundee United Head Coach this morning alongside Sporting Director Tony Asghar#UnitedInPursuit pic.twitter.com/jQCrFQIAQE

But our trend-setting boss revealed the shorts were to enable him to wear a walking boot, after he picked up an Achilles tendon injury while playing in a testimonial for long-serving former Sunderland player and kitman John Cooke.

The United gaffer led training at St Andrews on Friday after being given the all-clear by a specialist to stop using his crutches, and he is on target to have his walking boot removed ahead of our cinch Premiership opener away to Kilmarnock on July 30th.

“Some people wondered if the shorts at my unveiling press conference were a fashion statement,” said Jack.

“But why don’t we leave that hanging and people can make up their own minds?

“The truth is, I ruptured my Achilles tendon at the end of May while I was playing in a testimonial game for Sunderland’s kitman. I’ve been in a boot for four weeks but I got good news on Thursday and was told the tendon is on the mend.

“I’ve got four weeks to go then all being well I’ll be out of the boot and be able to start moving about a bit more freely, but to be honest it doesn’t inhibit me that much - it just looks a bit strange!”