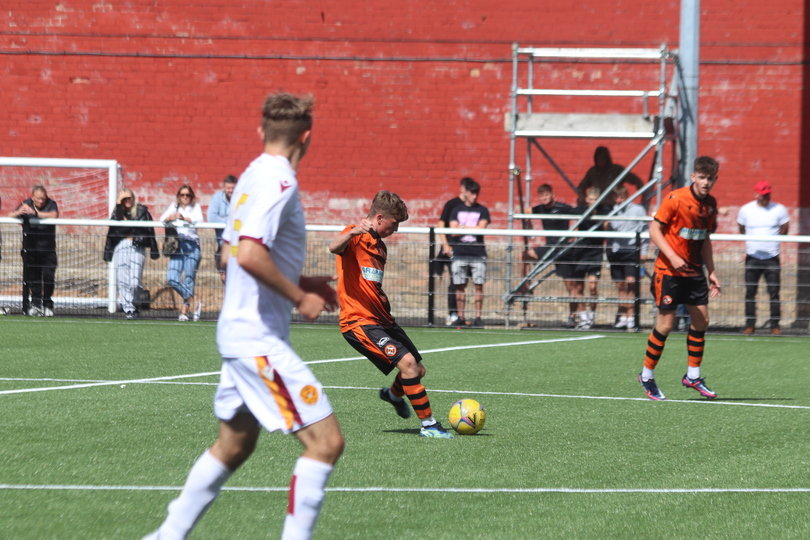 The Young Terrors were back in action after pre-season as the 2022/23 CAS Under-18s Elite League campaign began.

The newly refurbished Gussie Park played host to the curtain-raiser, David Clarkson’s physical Motherwell the visitors – a side which United defeated on all three occasions last season.

Under-18s Head Coach Ryan Moon opted for a 4-2-3-1 for his first competitive line-up since May, with new signing Connor May deployed on the right wing supported by an overlapping full-back of Sean Borland. First-team debutant Craig Moore anchored the midfield alongside Keir Bertie, whilst Adam Carnwath supported lone striker Stuart Heenan in the number ten role.

United looked to build from the back from the off, taking multiple brave decisions to try and play short intricate passes around an aggressive Motherwell press. However, they found this difficult to execute with a lack of movement in the wider areas.

With just five minutes on the clock, Motherwell capitalised on an unforced error to take an early lead. Heenan received the ball facing his own goal and played a simple backpass to Jamie McCabe. The 16-year-old attempted to dribble around Mark Ferrie but the ‘Well striker outfoxed him to nip the ball from his toes and play in colleague Luca Ross who slammed home at the near-post despite the best efforts of Arron Donald on the goal line.

McCabe redeemed himself soon after, denying Shay Nevans with an acrobatic save after the 16-year-old winger was played through on goal by Adam MacDonald.

Motherwell’s dominance continued, MacDonald this time trying to find the net himself as he tested the keeper with a dipping effort from 25 yards out before a vital intervention from Borland somehow managed to prevent Nevans from bundling the ball over the line after powerful running from Lennon Miller down the right.

Liam Trotter was the first man in tangerine to try his luck at the other end, spinning away from Miller down the middle with a sharp turn and driving a low strike at Kyle Aitken which the ‘Well keeper managed to gather at the second time of asking.

The Lanarkshire outfit responded sharply, with Ferrue breezing beyond Greg Petrie and prodding the ball narrowly wide of the upright with his left boot.

Miller should’ve doubled his side’s lead on the stroke of half time after bringing an exquisite, clipped delivery from Dylan Wells down on his chest in the area but failed to find the target from close-range.

After a quiet performance in the first 45, Moon was looking for a response from his side and he got one 120 seconds after the restart. A clearance from a United defender drifted beyond the Motherwell midfield and was collected by Heenan who carried the ball more than 35 yards, fending off the challenge of Arran Bone before nonchalantly stroking the ball under the onrushing Aitken.

The joy was unfortunately short-lived for the Young Terrors though. Max Ross sent a looping cross to the back post, with United keeper McCabe looking to be in control of the situation. However, a mix-up between himself and Petrie saw the ball spilled at the feet of Robbie Garcia on the burst from left-back and he prodded home into the empty net to restore his side’s advantage with 51 minutes on the clock.

Clarkson’s men could’ve added a third from a set-piece scenario, as MacDonald’s free-kick was met by the head of substitute Jevan Beattie who sent his free-header inches wide of the post from 12 yards.

Beattie was in the thick of the action once more after Miller’s curling, first-time pass found him at the corner of the box, but his half-volley was met by a strong hand from McCabe at the near-post.

The match began to open out in the closing stages, with United enjoying more and more of the ball around the halfway line, looking to find a way through a compact Motherwell backline. This task was made harder though by a lack of movement from the front four, who often found themselves stood in a straight line occupying the defence. The visitors looked to go long as soon as possession turned over, spraying passes into the wings for Nevans and Ross to chase.

Substitute Reece Kerrigan’s floated cross eventually dropped to Heenan in the box who found his snapshot blocked by the heel of Miller with 87 minutes down, then a first-time ball from Borland dropped onto Moore’s head but his effort lacked the requisite power to trouble ‘Well keeper Aitken.

The last action would come at the other end as Kerrigan felled Ross on the line of the penalty area, with the referee showing no hesitation before pointing to the spot. Dangerman Miller stepped up to the plate as he looked to wrap up the three points, but his strike cannoned back off the post. This mattered not though as the Steelemen rode out the two minutes of stoppage time to open their CAS Under-18s Elite League account for the season.