Despair for United as they lose out to St Mirren on penalties after a 1-1 draw in extra-time. A Nicky Clark penalty in the first half was cancelled just three minutes later.

United went into the second leg of the Premiership play-off with the game on a knife edge after Thursday’s 0-0 draw at Tannadice. Both sides were in good form with the home side on a seven game unbeaten run and United having lost just once in their last five matches.

The two sides last met at the Simple Digital Arena back in February in the Fourth round of the Scottish Cup. United ran out 2-1 winners in that encounter and manager Robbie Neilson would be looking for a similar outcome to take United back into the Premiership. The gaffer pinpointed United’s great travelling support as a key factor in sending them through.

United made just two changes to Thursday’s starting line-up. Safranko and Booth make the starting eleven, with Sow and Pawlett on the bench carrying knocks from the first leg but still available should they be needed. Butcher does make it onto the bench after missing the last few weeks with a groin injury.

St Mirren manager Oran Kearney made just one change from the first leg. Flynn drops down to the bench with Mullen taking his place. Jackson and Lyons miss out through injury.

First Half - Captain Mark Reynolds led out the United players for the biggest ninety minutes of their season. 1,500 Arabs had officially made the journey but many more were dotted around the stadium desperate to see their side.

The first few minutes were nervy as expected and both sides weighed each other up like a pair of boxers in the first round. The blustery conditions favoured United as they played in the direction of the wind, and such conditions meant that the ball would have to stay on the deck.

The first chance fell to McGinn of St Mirren in the 7th minute but his effort was dealt with easily by Siegrist in the United goal.

United were now settling into the game and coping with the windy conditions. Safranko and Clark causing trouble for the Saints defence without creating any clear cut chances.
In the 13th minute, Booth darted down the left hand side and, despite McMullan creating the overlap, whipped in a dangerous cross. Similar to the first leg it was a case of a great cross but no one in the box to take advantage.

In the 22nd minute, the game was turned on its head. United’s pressing led to a Safranko shot coming back off Hladky. The re-bound then came off Baird’s hand and referee John Beaton had no hesitation in pointing to the spot. Nicky Clark stepped up and made no mistake from 12 yards.

United’s lead would last barely three minutes as St Mirren got right back into the game with a Mullen equaliser. His right footed shot from the centre of the box fired past Siegrist in the United goal. After a tense opening 20 minutes the game had burst into life with 2 quick fire goals.

With the game and tie now poised at 1-1, and no away goals rule, the game was as evenly balanced as ever. It was now end to end and both sides seeking an advantage before half-time. The Paisley side were having the better of the chances but the United defence was standing up to the challenge with Cooke and Reynolds having a real battle amongst themselves. United were responding with some great counter attacking, with McMullan and Robson providing the pace.

A frantic first 45 minutes was brought to a close with referee John Beaton’s whistle and the game finely poised at 1-1. 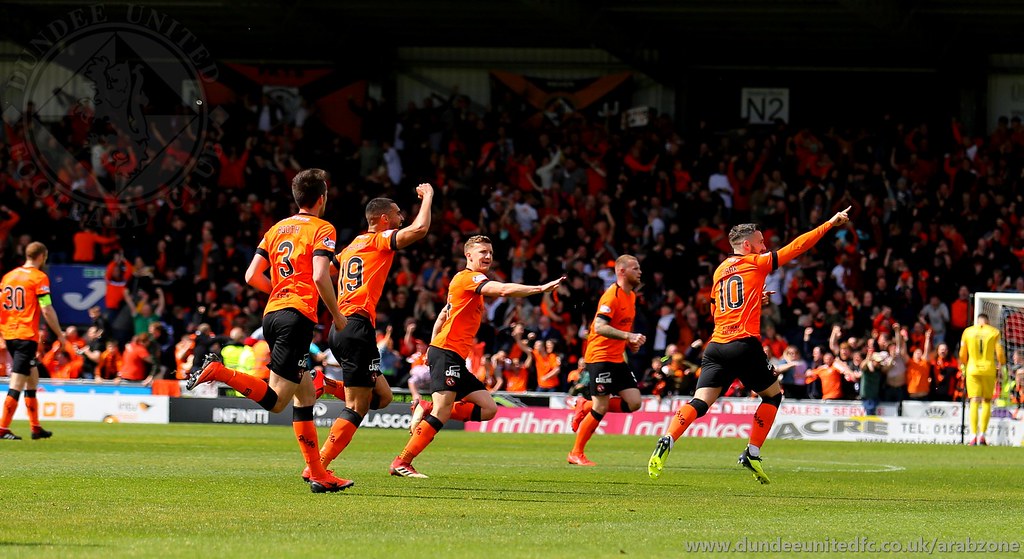 Second Half - Neither side made any changes as the second half kicked off.
With the possibility of extra-time, both managers would have to be tactical with their substitutions at the end of a long tough season for both sides.

The second half mirrored the first as both teams sized each other up in the opening exchanges, and the swirling wind continued to cause trouble for both sides.
The first chance of the second half fell to St Mirren. United attacked but a missed kick by Clark led to a counter attack by the Paisley side. McAllister was unlucky as the ball fell to him and his shot flew past the right hand side of the United goal.

The introduction of Pawlett for Robson on 56 mins gave United more composure on the ball, and a series of chances which kept St Mirren on the back foot. With just 30 minutes of the match, tie and season left there really was nothing between the two sides. Each side appeared to have a couple of minutes of pressure each before handing the mantle back to the opposition. The blustery conditions were still having a huge bearing on the proceedings.

United’s front line were continuing to press and the introduction of Sow for Clark on 68 mins gave them a more robust forward line. McMullan and Booth stayed on the front foot but couldn’t find a way past the resolute Buddies' defence.

With 15 minutes remaining, United were going all out for the decisive winning goal and were now lined up with a 4-2-4 line up as Pawlett and McMullan supported Sow and Safranko.

Siegrist kept United in the tie when a Hodson cross was met by McGinn. With just 10 minutes remaining, McGinn’s header was brilliantly saved by the United goalkeeper, much to the relief of the travelling Arabs watching on.

The fourth official indicated five minutes of injury time and sparked the expected frantic response with both sides looking for a winner to avoid a further 30 minutes.
As it was, neither side could find a breakthrough and referee John Beaton blew for full-time at 1-1 and take us to extra-time.

St Mirren had the first chance in extra-time. A Nazon cross was deflected towards goal by United’s Connolly and Siegrist was on hand again to pull off a great reflex save. The Swiss goalkeeper was man of the match in the first leg and was certainly showing his worth in this game.

The first 15 minutes of extra-time were fraught with fouls and few chances. Neither side wanted to make any mistakes that could lead to losing the game, and their chance of Premiership status.

The second half of extra-time kicked off with the United fans still in full voice backing their heroes. Despite St Mirren having much of the possession, the raucous band of travelling Arabs had been vocal throughout the game.

The second half of extra-time was still end to end with both sides desperate for a winner. Tired legs from both teams was now a significant factor. 120 minutes of tense football after a tough season would be the last thing either side would have wanted.

An aerial challenge on 114 minutes led to St Mirren’s Nazon being sent off, reducing the home side to 10 men for the last 6 minutes.

The sending off made little difference to the game as referee John Beaton blew for full-time and the game was going to penalties.

Pawlett took United’s first penalty which was saved by Hladky. McGinn then scored for St Mirren. Safranko had his penalty saved, before Popescu scored his making it 2-0 to the Buddies. Sow then missed his by hitting the post. Muzek then missed for St Mirren, keeping United in the tie. Booth then stepped up for United but his penalty was missed to give St Mirren the tie and the Paisley side retain their Premiership status. For United, it is a fourth season in the Championship and manager Robbie Neilson will look to re-build his side for another Title challenge.

Man of the Match - Siegrist. The Swiss goalkeeper pulled off a string of outstanding reflex saves to keep United in the tie.