An injury time winner from Nicky Clark added to a Shankland opener saw United advance in the Scottish Cup against Partick Thistle.

Azure skies above Dundee were punctuated by a high golden sun on a glorious Easter weekend, as the Scottish Cup returned to Tannadice for the first time in over a year. The fixture rules had been altered in this Covid-delayed competition, with every game being played to a conclusion at every round, with no space in the schedule for replays. In order to progress, nothing less than a United victory would do.

In a week which saw the Dundee United Supporters' Foundation make another significant monetary transfer to the Club, it was fitting that so many of Our Academy Graduates were present. Jamie Robson was making his 160th appearance as part of the starting XI, whilst on the bench Layton Bisland, Kerr Smith, Lennon Walker, Louis Appéré and Logan Chalmers hoped for a chance to get a taste of Scottish Cup action.

The opening twenty minutes saw both teams enjoying their football. The Terrors looked to play through the precision passes of midfielders Butcher and Fuchs, with multiple runners offering options in front of them. Shankland, Harkes and Fuchs all had glimpses of goal early on. However, United did not have it all their own way. Thistle belied their lowly league position and played with a panache and power. Several corners, long throw-ins and counter attacks for the away team indicated their threat.

It was the away side that opened the scoring on 25 minutes. A ball into the box was won initially in the air by the ever-industrious Fuchs, but the second ball went unclaimed by the men in tangerine and Tiffoney nodded home beyond Deniz for his goal.

As the half drew to a close, the away side created two gilt-edged chances that United were lucky to see go wide. First, former Terror Brian Graham was played in perfectly for a tap-in to an empty net, but mercifully trundled his effort past the post. Minutes before half time, Gordon found himself clear and got away a shot, again it went beyond the post.

The break arrived at an important time for United, who needed to regroup. 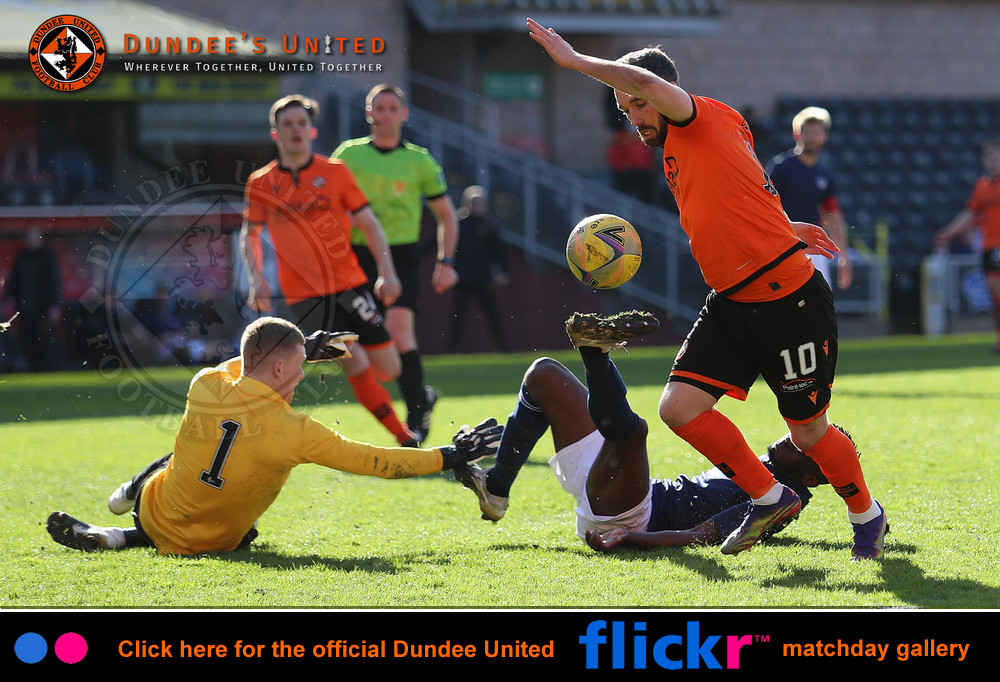 A hearty dose of smelling salts seemed to be administered in the interval, and United came out renewed. Chance after chance emerged for the home team. Shankland had a strike saved, and McNulty appeared to have got a strike over the line before a defender cleared it, but neither referee nor linesman gave the goal.

Jeando Fuchs and a hobbling Jamie Robson made way in the second half, the former for Nicky Clark and the latter for fellow Our Academy Graduate Logan Chalmers. The fresh legs were required to keep United in a tie that was rapidly slipping away from them.

The vital United opener came on 78 minutes. Logan Chalmers played in Spörle in a wide area with barely ten minutes of the knockout game remaining. The Argentine looked to angle a shot goalwards. The ball was stopped dead by a Thistle defender, and out of nowhere Shankland pounced. The lethal striker ran to the ball, pirouette on the six-yard line, and hammered it beyond the keeper. After trailing for over 50 minutes, the home team were right back in the contest.

Peter Pawlett came on and had a chance to win the tie. A long ball down the line saw Shankland chase, win the ball in a tight space and knock it over a defender. He played in Pawlett who seemed to have a momentary sight of target before being swamped by defenders.

90 minutes ticked by, and the game looked set for extra time. The ball was back with Captain Reynolds in defence. The experienced campaigner launched a speculative ball over the midfield towards Nicky Clark. It came to earth between a retreating defender and outrushing goalie. The pair clattered into each other, leaving Nicky Clark to pick up the ball and knock it home. A farcical moment for the away team, but an almighty relief for the men in tangerine and all those watching at home.

The tie stress-tested the Terrors, but in cup tie football progression is everything, and it’s the Tannadice side that march on to the next round.