The Club’s Academy is pleased to announce the signing of Rhys Caves. Born in 2003, Rhys plays holding midfield and will join our U17/18 squad. He was previously with Rangers.

Dundee United’s newly appointed Academy Director Andy Goldie stated: “The signing of Rhys is a massive coup for our Academy and it is a great testament to the vision we have for our Club that he turned down another eight offers to continue his development at Dundee United.

"I am personally delighted to have secured his signature having watched him flourish in the Scottish FA JD Performance School programme at Braidhurst High School and at Rangers Training Centre. He is joining a squad with a number of other potentially exciting players and I'm looking forward to seeing him continue to grow as a person and a player here within our environment."

At half time of our home game against Greenock Morton at Tannadice the club pre-academy provided entertainment for the supporters playing small-sided games on the pitch.

The pre-academy is the youngest groups at the academy and trains twice per week at GA Arena and our Stirling Academy group at Forthbank for players U9 & U10 complimenting their grassroots clubs training.

It has been a busy week for the boys with their halftime games, in-house games on Friday night and a visit from academy graduates Jamie Robson and Logan Chalmers at their last training session.

The Academy is delighted to welcome two new recruits to the Club.

Goalkeeper Ellis Mitchell has impressed the coaches during his trial with the club and he will go down as one of the farthest travelled current Academy players commuting from Pitmedden Aberdeenshire. Thankfully the family have a caravan at St Andrews in that they stay in often. Ellis had a spell with Aberdeen FC but we thank his former boys' club Fortmartine United for their work in Ellis's development to date.

The second signing of the evening will be joining the 2008 group. Josh Hutcheson attends our Stirling Academy and after impressing during training and games both in Stirling and Dundee we are delighted to commit to Josh and look forward to supporting His development. Thanks to his former boys' club Harthill Royals for their work with Josh.

The Club welcomes both boys and their families to Dundee United FC. Good luck, boys!

U17s Academy goalkeeper Fraser Currid has been selected for the SSFA Under-18  International Squad for the forthcoming Centenary Shield international games.

This is followed by games v England on Friday 23rd March (York), the Republic Of Ireland on Friday 12th April (Dublin) and Wales on Thursday 19th April (Palmerston Park, Dumfries).

We would like to congratulate Fraser on this achievement and wish him the best of luck in the upcoming games.

Pictured above is our recent signing for our Academy U15s squad, striker Finlay Malcolm. Fin is from the Falkirk area and up until recently was part of the Forth Valley Academy that ceased operating just before Christmas. Prior to playing with Forth Valley, Fin had been scoring on regular basis for Sygenta BC in Grangemouth and actually scored a hat-track in the U13s Scottish Cup Final but ended up on the losing side. We had been tracking Fin's progress at both his previous clubs and are delighted that he has chosen Dundee United for his future development.

We look forward to him continuing his scoring prowess with our U15s squad.

Pictured above signing for our U15s squad is centre back Lewis Anderson. Young Lewis who lives in Kirkcaldy was recently with Hearts and we are delighted that he is coming on board with Dundee United Academy.

Lewis played with the Blue Brazil team in Cowdenbeath as a youngster and comes with a glowing reputation as a skilled centre back who can also play in midfield.

We look forward to Lewis further unlocking his potential with the Dundee United Academy.

Pictured above signing for the Dundee United Academy U16s squad is Nicholas Fletcher. Nick has committed his immediate future to the Academy and we are delighted that he has pledged his further development with our U16s squad.

Nick is from  Forfar and played with Forfar BC before joining Dundee West and that is where his exploits as a striker were being monitored by Head Of Academy Scouting Jim Carlin. We hope that he continues to score goals we wish all the best with the Club.

We look forward to all the above players continuing their development with Dundee United Academy. 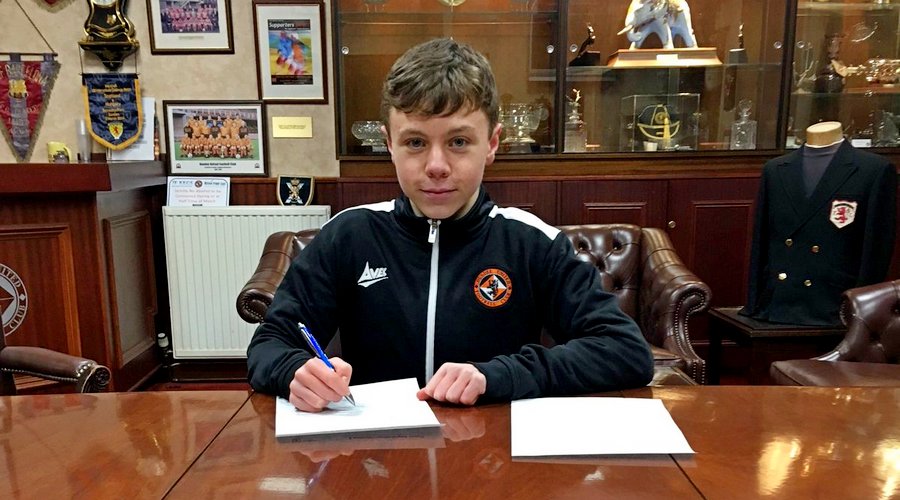 Pictured signing for Dundee United Academy U15s squad is left-sided defender Shaun Brown,up until December Shaun had been part of the Forth Valley set up and also attends the SFA Performance school, Graeme High.

We are delighted that Shaun has committed to Dundee United and work look forward to him developing with the Academy.