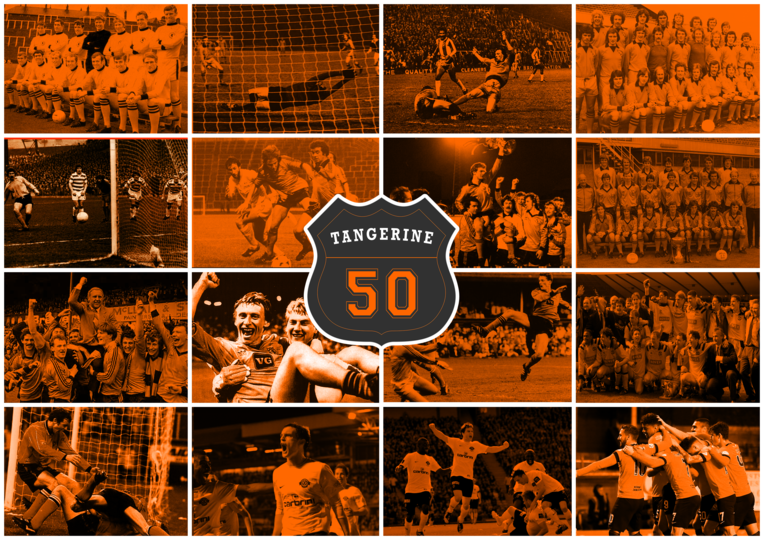 In 1967, America started their soccer revolution, importing 12 overseas teams to represent the major cities of the States, with Dundee United playing as Dallas Tornado.

United did so well; they were invited back to Dallas in the summer of 1969.

The Tornado shirt was a big hit, and with colours of burnt orange and blue trim, it was exciting, vibrant and yes, fashionable. Mrs Barbara Kerr, the wife of manager Jerry Kerr, loved it so much, she suggested United should wear the same colours back home.

The tangerine United shirts with black trim and a new circular, rampant lion badge, were born on the August 4 versus Everton.

Who would have thought that 50 years later, Dundee United would still be identifiable as the team known worldwide for their distinctive tangerine shirts?

Thank you, Mrs Barbara Kerr, the summer of '69 and Dallas Tornado.

During the 2019/20 season, Dundee United will be celebrating the spirit of Tangerine50 and the impact it has had on us as a Club and on its loyal United supporters.

Throughout the anniversary year, our content will feature supporters, staff, players and legends as we recount the journey from the trip to Dallas and the decision to play in Tangerine through to the fantastic European nights and domestic trophy wins in all their glory.

Mal Brannigan, Managing Director, said: "Celebrating 50 years of Tangerine allows us to pay tribute to the remarkable support that has followed us faithfully throughout these Tangerine Years.

"The colour is now very much a part of our DNA. It is unique and eye-catching. What was introduced as modern and brave, became renowned all over Europe and beyond throughout a fearless period for the Club and we want to celebrate that alongside our fans.

"Our campaign captures everything special about being part of the United family and how proud we all are to represent the colour while paying homage to the origin of one of British football's most recognisable jerseys."

Beyond the Tangerine50 marketing campaign, Dundee United will host a range of activities to pay homage to the achievements of the Club and its fans throughout the tangerine period including a celebration at the first home league game of the season on August 3.