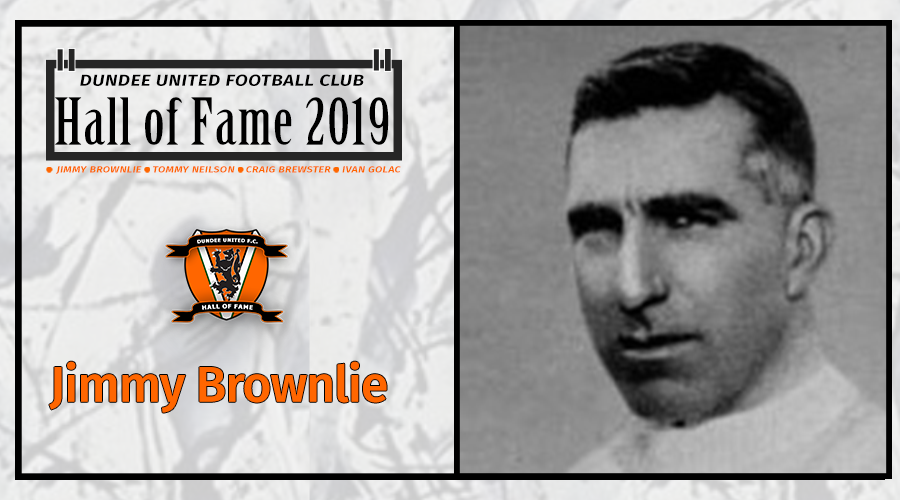 Friday 15 February sees the 2019 Hall of Fame Dinner take place in the West End Lounge at Tannadice Park and four more Dundee United legends will be inducted. In the run-up to the event, we profile each of the four inductees. First up is three-times Manager and goalkeeper Jimmy Brownie.

Brownlie had been with Third Lanark for 19 years and had international experience, winning 16 caps for Scotland when he joined Dundee Hibs as Player/Manager in the summer of 1923. He was the first choice keeper until he retired in April 1924, but would later return to play in one or two emergencies.

During his first year at Tannadice, he oversaw team matters while the Club changed from Dundee Hibs to Dundee United after their return to the Scottish League set-up.

In only his second season in charge, Brownlie pulled off the unthinkable - leading the Club to the Division Two championship and promotion to the top flight for the first time in the Club's history.

Dropping down to Division Two in 1927, he won the title again in 1929 and won United promotion for the third time in 1931 as runners-up.

Just weeks after their promotion in April 1931, the Club took the unusual step in letting Brownlie go after 8 years as Manager; however, he would return to manage the side once again in March 1934, when the new owners of the Club brought him back to replace outgoing manager Willie Reid.

Brownlie missed out on a fourth promotion during the 1934/35 season, and in 1936 United hit financial difficulties yet again, with director George Greig taking over the Club's debt and the Managers position.

Two years later Brownlie returned to Tannadice once more and was appointed a Director of Dundee United and took on the role of Manager for a third time, jointly with Sam Irving. This partnership lasted until the outbreak of World War 2 when Brownlie announced that he was giving up both roles due to the pressure of his other business interests.

After retiring, Brownlie was a regular visitor to Tannadice, rarely missing a home match, and witnessed the Club's return to the top Division in 1960. Jimmy passed away in 1973.

There are limited places still available for the event, and anyone interested should contact the Commercial Department on 01382 832202 or by email at commercial@dundeeunitedfc.co.uk