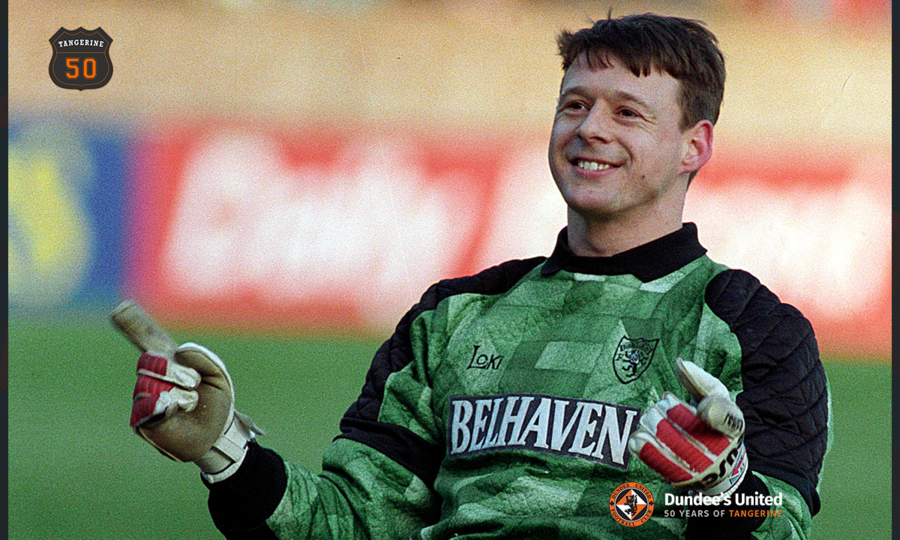 The #Tangerine50 pre-match guest for tomorrow is none other than cult hero goalkeeper Alan Main.

Very much a fans' favourite, Alan made 187 appearances in his eight years with the Club.

Having begun his career at his hometown club Lossiemouth where he made his debut aged just 15, Alan joined Elgin City before signing for United in November 1986 for a fee of £8,000. He made his competitive debut (aged 19) in March 1987 in a Scottish Cup replay against Forfar Athletic.

Battling with Scott Thomson to be Billy Thomson's understudy, Alan was an unused substitute against Barcelona at the Camp Nou and against Borussia Monchengladbach at Tannadice as United made their way to the final of the UEFA Cup. He played in two league matches at the tail end of that season as manager Jim McLean utilised his squad to cope with that long, hard season.

With Billy Thomson out injured for a spell during the 1987-88 season, Alan was the first choice keeper for a couple of months, before going out on short term loans to Cowdenbeath and East Stirlingshire. However, in October 1989 he took over between the sticks and held the No.1 jersey for the next two seasons, collecting a Scottish Cup runners-up medal after the final against Motherwell in May 1991.

Previously a Scotland Youth and Under-21 internationalist, Alan's form saw him called up to Andy Roxburgh's Scotland squad for a match against Malta in November 1993. However, a severe back injury prevented him making his Scotland debut, with the required operation side-lining him for nine months meaning he missed out on United's Scottish Cup final victory over Rangers in May 1994.

Alan will take to the field to salute the United support around 2.50pm. Join us to welcome back yet another #Tangerine50 icon - Alan Main (Ooh aah!).

Admission for tomorrow's game is by ticket and you can buy your tickets online 24/7 and scan at the turnstile via your smart device.