BUILD UP CONTINUES WITH WIN AT RANGERS TRAINING GROUND 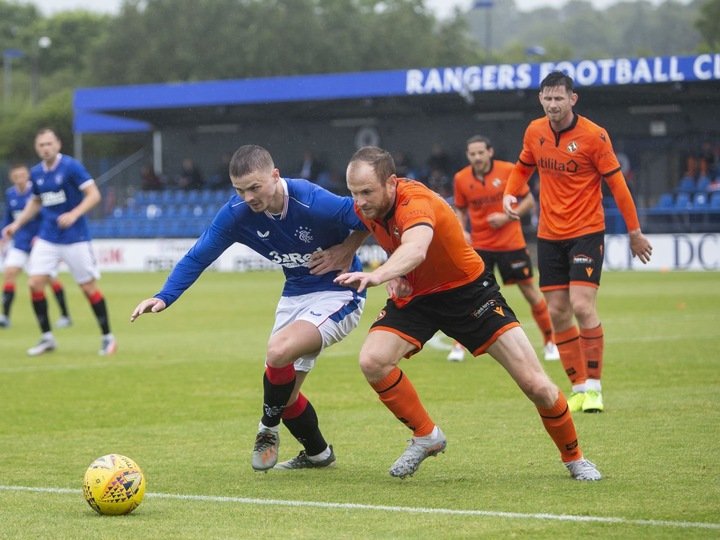 The build-up to August 1 and the Premiership opener against St Johnstone continued today at Rangers Training Ground against a strong Rangers XI featuring a number of first-team players.

The Terrors started well and were rewarded for the bright start with a penalty in the fourth minute. Good work by Robson down the left resulted in his cross eventually dropping to Clark who shot from the area’s edge came off the hand of defender Middleton. Clark emphatically drove the penalty high to the goalkeeper’s right to put United ahead.

Eight minutes later, the hosts equalised with a well-worked goal. McPake with the finish from around 12 yards beyond Siegrist.

In an entertaining first-half both teams continued to create an opening, although, neither goalkeeper was called on to make a significant save.

It was the same eleven who took to the field for the start of the second half for United but recent signing Jack Newman replaced Benji Siegrist on the hour.

United regained the lead minutes later after Butcher robbed the ball in midfield and fed it to Shankland. The return pass to Butcher was perfect and from just inside the penalty area the midfielder thumped the ball home. His reward was to be immediately replaced alongside Appere with Cammy Smith and Dillon Powers taking to the field.

Within a few minutes, United went further ahead with Pawlett and Powers pressing the Rangers defence in a deep area and, from the resulting possession, Shankland twisted and turned inside the box before curling an effort low into the far corner.

The skipper Mark Reynolds was replaced by Ross Graham as United took the opportunity to give players game time.

United scored a fourth after a quick corner saw Connolly win a challenge inside the box and playing the ball back to Powers who guided his effort into the left-hand corner of the net from inside the penalty area.

Neilson, Fotheringham, Freeman and Davidson were next to enter the field of play replacing Connolly, Harkes, Smith and Robson.

Freeman was denied a fifth in the last ten minutes when his low curling effort was saved superbly by the Rangers goalkeeper.

This will have been a satisfying run-out for Manager Micky Mellon with a strong performance being matched with goals. The team that finished the game also had a strong youthful feel with only two players over the age of 23 on the pitch.

The Gaffer said, "It was another worthwhile run-out with some well-worked goals. We still have work to do ahead of the new campaign but we will strive to get better in every session between now and the Premiership campaign.

"It was another opportunity where everyone got minutes and the young lads again showed up well. All in all, I am pleased."