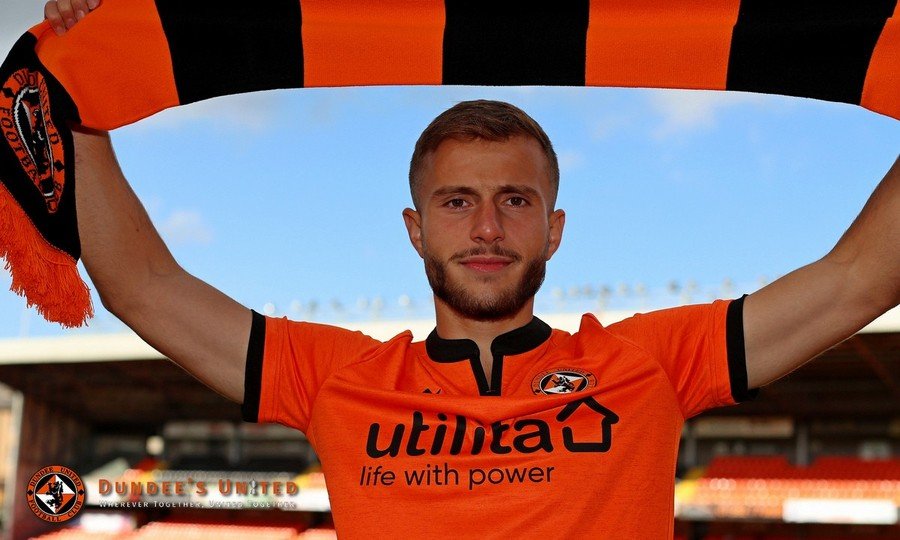 The Kosovan Under-21 hopeful has signed from Rochdale AFC for an undisclosed fee and joins United on a two-year contract after a trial period that allowed Florent the opportunity to showcase his abilities to the Club while also allowing the industrious midfielder to experience the environment of the HPC at the University of St Andrews.

Flo arrives at Tannadice, having graduated from the Rochdale Academy, and is looking to progress his development further by breaking into the first team just as Logan Chalmers (20), Luke Bolton (20), Kieran Freeman (20) and Lewis Neilson (17) have done already this season.

Initially here on trial before the Covid-19 pandemic hit the UK, the player is delighted to finally secure his place at United. Speaking to DUTV, Florent said: "I'm delighted to get the deal done. It's been a long time coming given I've been here before on trial. I'm buzzing to play for such a big club with the history and fans that it has.

"There are great facilities here and, as a young player, I've come here to develop. We've got everything here to improve and it's a great platform for me to continue my growth as a player. I can't wait to get started.

"I was born in Manchester but my parents and brother are from Kosovo and moved over to Britain. First and foremost, I'll try and help Dundee United do well in their first season back in the top flight but playing for my national team is something I want to do."

Manager Micky Mellon added: "Flo is a really talented boy and we feel, with the ingredients we'll be able to add to an already impressive lad, that we'll have a really good player here at Dundee United.

"He's at a good stage in his career where I believe I can use him in the first team so I'll be expecting him to be putting those lads in the squad under pressure."

Sporting Director Tony Asghar said: "I am delighted to have Flo join the United family. He has already shown he can fit into the environment that the manager and staff have created in terms of the level of standard and ability. We as a Club will continue to bring players who we believe can make United successful as well as developing them into potential international players."