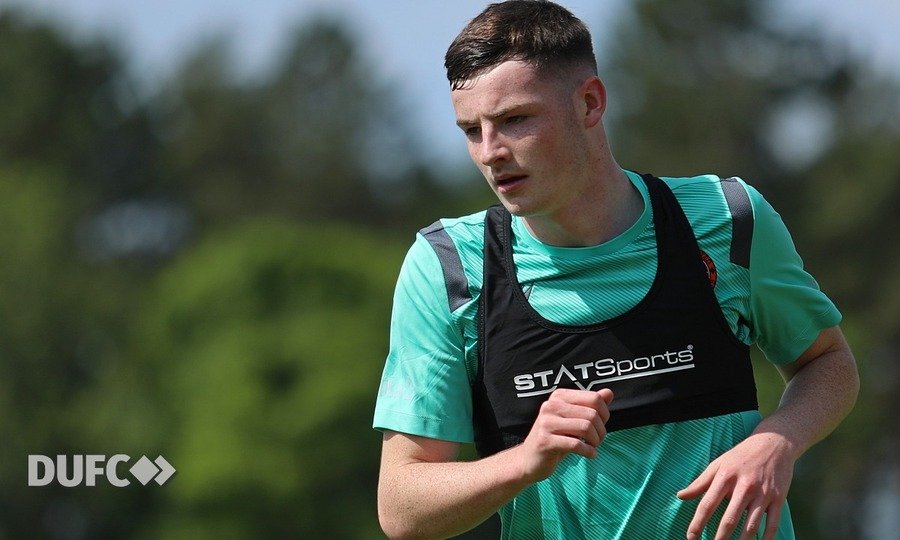 The first week for pre-season is coming to a close and for Kerr Smith it's been one of the most challenging but rewarding summer starts he's had yet.

The 16-year-old centre-back is experiencing his first pre-season with the first team as preparation for our opening Premier Sports Cup game against Kelty Hearts got underway.

With just four weeks off for the summer, Kerr feels like he's hardly been away from the High-Performance Centre at St Andrew's University, but he couldn't hide his excitement at being back training with his teammates.

Speaking exclusively to the official Dundee United website, the young defender said: "It's been a tough first week of pre-season but also really good and I've enjoyed being back a lot. Being around the new staff has been great and it's been beneficial despite being so tough.

"Obviously, pre-season is going to be hard but it's getting us ready for the start of the new campaign. You need to be going into the new season fit, strong and ready to win games.

"I'm used to the speed of first team training now having been part of it all last season. There's a big difference in comparison to 18s training but I can handle it. I used to get nervous when I would step up to train with the first team but I know them all now and they're my teammates so it's much easier for me to settle down."

The highly sought-after youngster was subject to interest from a number of English Premier League clubs ahead of his 16th birthday in December 2020, even travelling down south for trials at some of the world's biggest clubs. He decided, however, to sign his first professional contract at Tannadice when he came of age and made his first team debut just two months later.

He would go on to make a total of five appearances before the end of the campaign, including back-to-back starts against Motherwell and St Mirren in the final two games of the season.

"Looking back on last season I would've liked to have played more," admitted Kerr. "But maybe I just wasn't ready. I think that run of games towards the end of the season proved I'm ready to play first team football and I'm ready to get more games under my belt heading into the new season.

"The back-to-back starts against Motherwell and St Mirren hit home how tough senior matches can be on the body. On the Sunday, down in Paisley, I felt was tiring a bit but it's all in your head. It's always going to be difficult playing against men at 16-years-old, but you've just got to keep the focus throughout the whole game.

"I got to play against top strikers like Kyle Lafferty and yeah he got a few goals but that's a learning curve for me. I think, apart from those, I dealt with him pretty well for my first start and then in the Motherwell game I thought I built on that and did really well, being calm on the ball.

"Then against St Mirren, I kept my first career clean sheet which was a good achievement. To get five games in the Premiership at 16-years-old is a pretty good return, but I want to get more. I'm looking to get 10/15 games a season.

"I think the gaffer's got a lot of trust in me because he's coached me for a long time now through the 18s. I've just got to keep working hard in training because nothing is definite. If I don't train well then I'm not going to deserve to play but, for me, that's not going to happen. I'm going to go in there and earn my place."

The fight for a first team place will be tougher than ever this season though with the return of United's first summer signing Charlie Mulgrew. With over 500 career appearances, the 35-year-old central defender brings bags of experience to Tannadice and will be aiming for a starting spot of his own in Tam Courts' XI.

While it's another challenge for Kerr to overcome, the opportunity to learn under someone who has 44 caps for Scotland is not something he is going to pass up.

"I've spoken to Charlie a lot this week and he's been really good with me," said Kerr. "He's obviously an experienced player so I listen to everything he's telling me. We've been partnered together in some of the small-sided games and it's been great to play alongside him. I'd like to play with him in an actual game at some point because I think our games would suit each other.

"It's great to have experienced defenders here to learn from. The skipper, Conns, Ryan and now Charlie who've played at the highest level. If I'm unsure about something I will go ask them for advice but I learn more from playing alongside them and watching what they do."

Euro fever has captured St Andrews this week just as it had the entire nation. While Scotland didn't get the result we all wanted to progress to the knockout stages of the tournament, the energy and support surrounding the national team is stronger than ever and it has Kerr thinking of his own international future.

While age groups might have a bearing on what level he plays, Kerr is an ambitious individual and has aims of potentially joining teammates Chris Mochrie, Lewis Neilson and Kai Fotheringham in the Under-19 squad for the European Qualifiers later this year.

"It's strange this year because there isn't a Scotland U18s squad which is my age group, there's 17s and then 19s. But obviously, if I'm playing first-team football then I could aim to be in the 19s squad for the Euro qualifiers in November. That's something I could push to be part of."