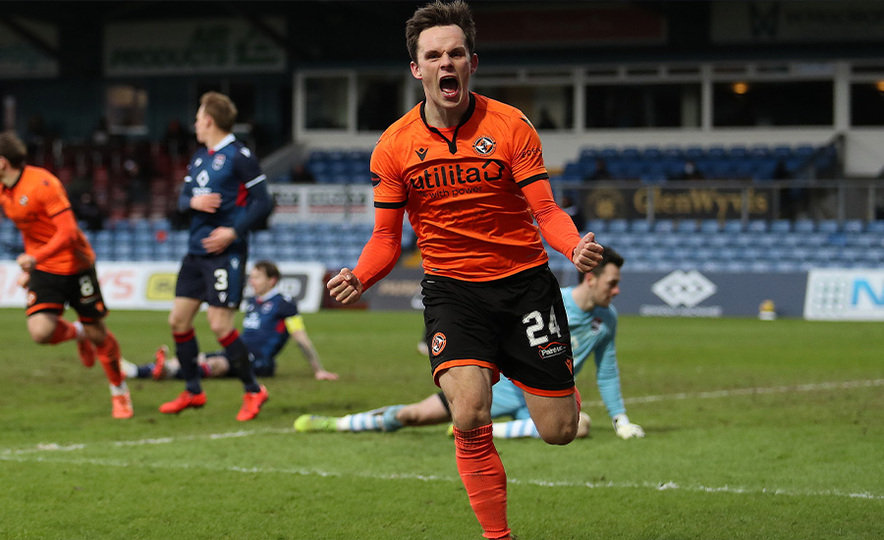 Dundee United and Beerschot have agreed an undisclosed fee for the transfer of striker Lawrence Shankland.

Lawrence leaves with the best wishes of everyone at Tannadice for his efforts in the tangerine shirt. An instrumental figure in our Championship winning season, ‘Shanks’ played 74 times for United scoring 40 goals.

The striker joined United in July 2019, despite interest from England and further afield, following a successful pursuit by Sporting Director Tony Asghar and the recruitment team and was enamoured by the prospect of developing at United’s impressive training facilities, staff and resources. He went on to win his first international cap in October 2019. He has played three times for Scotland scoring his first international goal three days after the above debut.

A favourite with our fans, Lawrence leaves Tannadice knowing he has developed as a player in his time here but also that he played his part in bringing Dundee United back into the Premiership and consolidating our place last season.

“I have really enjoyed my time at Dundee United and I would like to thank everyone at the Club from the playing staff and coaches to the support staff both at Tannadice and St Andrews," Lawrence told the official Club website.

"I came to United with the objective of developing personally and helping the club get back to the Premiership and I now see it is the right time to take the next step in my career development elsewhere."

“The fans support for me was amazing right from the off and I will always be grateful for their backing and, hopefully, I will be back one day to see them all. I also have to mention the backing I have received from the chairman and vice-chairman who made me feel such a part of this club and welcomed me in so warmly.

"I leave knowing there is an excellent squad and great coaches at United and I am excited to see how successful this season will be for them. I now look forward to my future in Belgium and cannot wait to get started. Thank you to everyone at Dundee United.”

Sporting Director Tony Asghar said: “Lawrence was sold on the vision we offered both personal and club-wise. He has achieved great success here, became a fans favourite, scored goals, improved his all-round play and became an internationalist. He felt it was time to try something new and once the clubs agreed a fee we were happy to allow him to continue his career elsewhere.

“It is an important part of our strategy that we develop players so they can continue to flourish if they move on and Lawrence has been a great example of the strategy working and we wish him every success for the future. He will always be welcome at Tannadice.

“We showed on Saturday that we are a good team with good coaches and a fantastic fan base. Alongside our HPC at the University of St Andrews it shows we are a club with positive momentum and an exciting future.

“We will look to enhance the squad and continue to support the coaches as they plot our way forward on the pitch.”