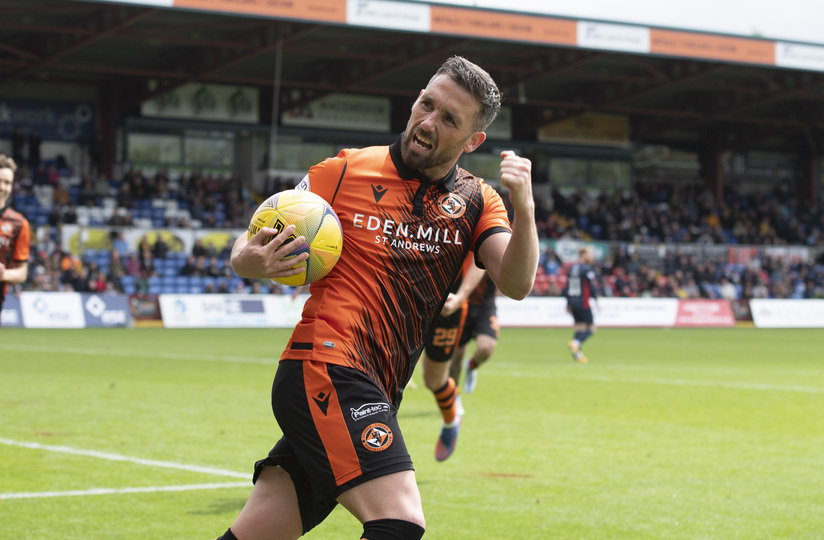 It was destination Dingwall for United as they contested their last match of the 2021/22 cinch Premiership campaign.

The Staggies were knocked out of the battle for Europe on Wednesday with a defeat away at Ibrox, whilst United confirmed their place with a valiant point against Celtic. The Terrors now knew all they had to do to claim fourth place was better Motherwell’s result at Celtic Park.

Gaffer Tam Courts made three changes to his side for the crunch match at the Global Energy Stadium, as Ross Graham, Tony Watt and Charlie Mulgrew were reintroduced to a 3-5-2 set-up, the latter being deployed in defense midfield once more.

Kick-off was delayed by five minutes after an assortment of inflatables, ticker tape and pyro were hurled onto the pitch a boisterous Tangerine Army which completely filled the stand behind Benji Siegrist’s goal, the mood buoyant in the knowledge a continental trip was on the cards.

Ross County enjoyed a more threatening start to proceedings, working clever combinations between Jordan White, Regan Charles-Cook and Jake Vokins nicely down the left. After 11 minutes Charles-Cook skipped beyond Dylan Levitt sharply before the loose ball from his trickery was cleared by Kieran Freeman. Former United man Blair Spittal picked up the scraps and attempted a strike from distance which was blocked by Archie Meekison, and his follow-up trundled harmlessly wide.

United could’ve opened the scoring minutes later as Ross Graham found the feet of Meekison and the Academy graduate executed a sharp turn away from Conno Randall to buy space for the shot but his left-footed effort slid narrowly past the far post.

Meekison was involved once more as he teed up Watt just outside the area, the United striker going for precision rather than power leading to a comfortable save for goalkeeper Ross Munro.

With half-an-hour down Spittal went close twice in quick succession, first sending a strike skidding past the upright from inside the D after powerful running from Joe Hungbo then having a 20-yard half-volley held by Siegrist.

The best chance of the half for United fell the way of Meekison after 41 minutes, a neat flick around the corner from Watt sending the 20-year-old through on goal who rattled the post from just inside the box with just the keeper to beat. Merely seconds later, Watt was once again the architect of a clear-cut chance for the visitors, this time overpowering Declan Drysdale and teeing up Freeman who’d made up ground at the back post but he blazed the ball over the top of the crossbar with the goal at his mercy.

Yet another golden opportunity fell came for United just three minutes after the restart, Levitt’s shot causing chaos in the area and eventually the ball was prodded back into the Welshman as he advanced towards the six-yard box. Levitt looked certain to score given his scintillating form of late, however he sent the ball bouncing agonisingly wide of the target with Munro rooted to the spot.


The introduction of Harry Paton for the hosts seemed to swing the pendulum back into their favour, the midfielder picking up neat pockets of space in which he received on the turn and drove directly towards goal. With almost his first touch he forced a save from Siegrist as he raced into the box, and then did the same after playing a neat one-two with Spittal to buy space in the box with the Swiss equal to his effort once more.

United sub Ilmari Niskanen made an instant impact as he burst down the left flank to collect a Mulgrew pass before chopping inside Randall and sending a curling strike inches wide of the far post.

On 62 minutes Hungbo thumped a shot into the Jail End from 16 yards under little pressure from the United defence and then County deservedly opened the scoring in spectacular fashion. Ben Paton strode towards the 18-yard box unchallenged and rolled the ball left for Spittal, the Staggies number seven picking out the top corner with a curling strike which left Siegrist helpless.

However, it only took United four minutes to get back on level terms. A Levitt corner caused penalty-box pinball and Niskanen got a toe to the ball before being felled clumsily by a County defender. The confident Clark stepped up and maintained his near-flawless spot-kick record as he tucked home into the bottom left corner.

A ding-dong final quarter ensued as both sides went for the three points. Kevin McDonald sent an audacious strike close to the top left corner and Paton continued to worry at the other end, but it was to be the Terrors’ day and Clark was to be the hero.

A long ball from Graham was collected by the striker, who held it up for his partner in crime Watt. The former Motherwell man kept his composure to pick out the advancing Freeman at the back post who cushioned the ball back across goal for Clark, and the 30-year-old was left with the simplest of tasks to tap home into the unguarded net to spark bedlam amongst the rowdy travelling support.

Three minutes of injury time ensued but United rode it out to conclude the season in dream-like circumstances, securing a place in the third round of the Europa Conference League.