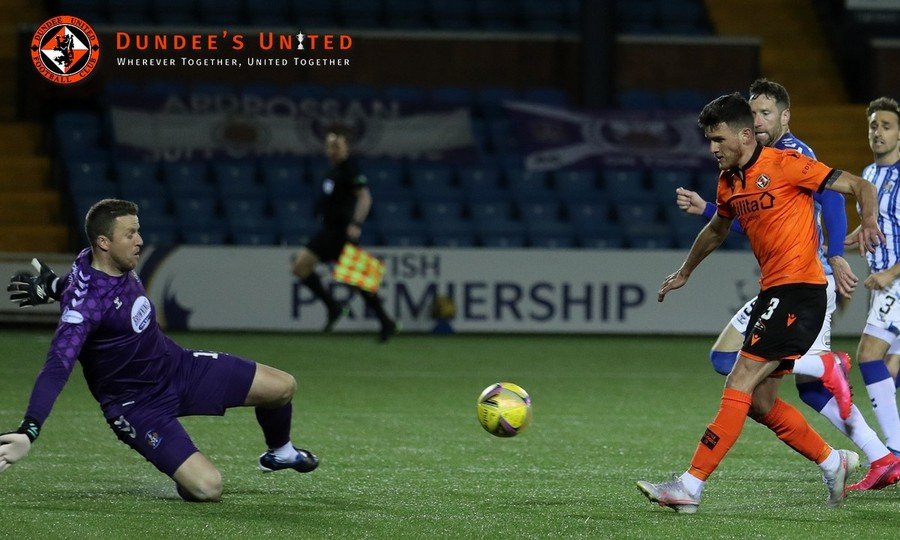 A bad day at the office for United as a Lafferty hat-trick sees Kilmarnock beat United 3-0 at Rugby Park.

United went into tonight’s game with Kilmarnock on the back of a six game unbeaten run in both league and cup competition. Micky Mellon’s side had come through the tricky away encounter against Forfar Athletic in the Scottish Cup on Friday night at Station Park, and could now focus their attention back to league business.

As expected, Benjamin Siegrist was still missing from the starting line-up after injuring his hand in the warm-up against Forfar at Station Park with Deniz Mehmet keeping his place for the second game in a row. Manager Micky Mellon made seven changes in total from Friday’s game against Forfar, Connolly, Hoti, Bolton, Harkes, Appere*, Kerr Smith* and Fuchs all stepping into the starting eleven. With Premiership status now sealed, Micky Mellon was clearly looking to give United’s fringe players a chance to show what they can do in preparation for next season.

Kilmarnock manager Tommy Wright made four changes to the Killie side that beat Montrose in last weekend’s Scottish Cup win, Ibsen Rossi, Haunstrup, Dicker and McKenzie making the starting eleven. The home side started the game second from bottom in the Premiership in the three way relegation battle with Hamilton and Ross County.

First half Summary - The sun shone over Rugby Park as the game kicked off. Kilmarnock started the brighter of the two sides as United’s fringe players looked to settle. Smith and Bolton combined well down United’s right wing in the early stages of the game but without creating any clear cut chances.

The first twenty minutes of the game were a battle as both sides looked to stamp their authority on the game. United’s young recruits were giving a good account of themselves. Hoti in particular was in the thick of the action and showing his strength. Appere* was energetic up front and keeping the Kilmarnock defence on their toes. Fellow Academy Graduate Kerr Smith* looked comfortable at the back alongside the more experienced Connolly.

Kilmarnock took the lead just after the half hour mark. A cross from the right looped over Deniz and found Lafferty five yards out in front of the empty net. The Northern Ireland international couldn’t miss with his header.

Just two minutes later and Lafferty made it two nil to the home side. A well placed pass from Burke found Millen down the right. His cross found Lafferty waiting twelve yards out and his right foot shot flew past Deniz’s right hand post. Despite a comfortable start to the game, United were now up against it.

Kilmarnock were keeping a high line and stopping United getting out their own half. A kick out from Deniz found Robson under instant pressure from Millen and Killie were back in United’s box. Unfortunately, Fuchs's tackle was mis-timed and as Burke went down, referee Alan Muir pointed to the spot. With five minutes of the first half remaining, Lafferty stepped up and slotted the ball past Deniz for the second hat-trick of his Kilmarnock career.

As the referee blew for half-time, United had seen a comfortable game disappear in the last ten minutes of the game. The three nil score line gave United an uphill task for the second half.

Second Half Summary - Neither side made any changes as the sides came out for the second half. The first chance of the second forty-five saw a neat Pinnock turn saved well by Deniz down to his right hand post, an early indication that Kilmarnock weren’t resting on their three goal lead.

United were looking to get back into the game but the experienced Kilmarnock side were keeping the visitors at arm's length. Harkes, Fuchs and Hoti were all looking to press higher up the park but still couldn’t create. With Appere ploughing the lone furrow up front there were few openings for the youngster to capitalise on.

The introduction of Academy Graduate Archie Meekison was the first ray of light in the second half. An array of neat passes, skill full dribbling and a long range effort just over the bar showed the potential of the youngster; definitely one for the future as Manager Micky Mellon continues to look to the Academy.

With ten minutes remaining, United had their best chance of the game. Sporle found himself one on one with Doyle in the Kilmarnock goal. Doyle initially saved Sporle’s shot. The rebound fell to Appere and as Doyle collided with two defenders his shot fell back to Sporle. The Argentinian’s second shot flew wide of Doyle’s right hand post. A comedy of errors and a moment that summed up United’s night.

United’s second half performance was better than the first and their hard work deserved at least a goal. Despite being three goals down for the entire second half, United made only one substitution. A clear indication that manager Micky Mellon was keen to rest some of the first team players for the Scottish Cup Quarter-Final against Aberdeen at the weekend.

As referee Alan Muir blew for full-time it just wasn’t United’s night. A Kilmarnock side battling to avoid relegation had more fight than United’s makeshift squad. Thoughts can now turn to the Cup at the weekend and the memories of 1994 and 2010.