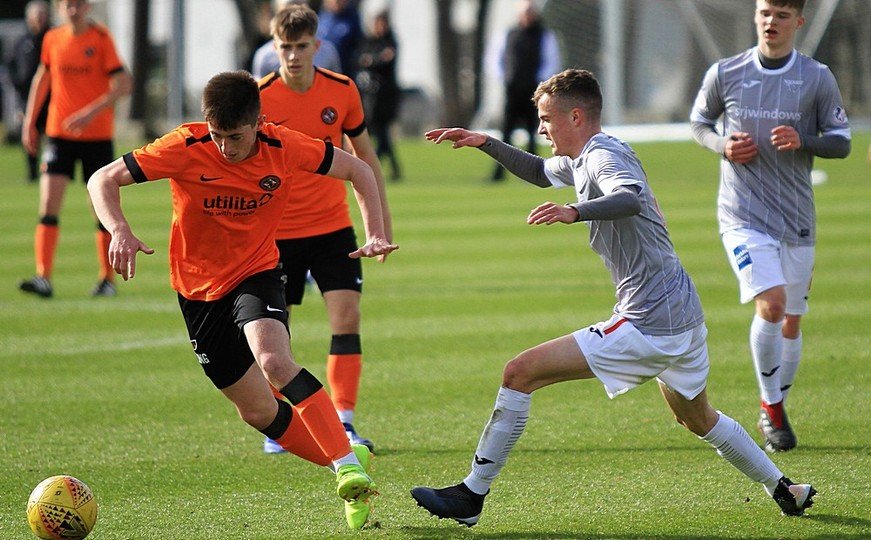 Whereas recent Reserve sides have contained a major nucleus of first team players, with the first team match at Dunfermline 24 hours later, a very much younger side faced similarly youthful opponents.

The Tangerines’ side mainly comprised  loanees and under18s with Matty Smith the only really experienced player on view.

The visitors got off to a great start being awarded a fifth minute penalty after Lewis Sawers was brought down in the box and Callum Smith sent the penalty in off the underside of the bar.

Halfway through the first period, the Pars keeper Craig Burt pulled off a great block to deny Louis Appéré as United upped the ante.

They were duly rewarded on 33 minutes when Declan Glass latched on to Michael McArthur’s cross from the right to fire home from 12-yards.

United were now dominating and substitute Adam Hutchinson headed over a Scott Banks corner inches over.

On the hour mark and against the run of play, the visitors regained the lead with a terrific strike by Lewis Crosbie from outside the box.

The action quickly swung back to the other end, and Burt made a great stop to deny Logan Chalmers.

On 73 minutes, United were awarded a penalty for a foul on Jake Davidson and Glass converted confidently.

Thereafter the Pars goal came under siege as the Tannadice youngsters went all out for the winner, but it wasn’t to be.