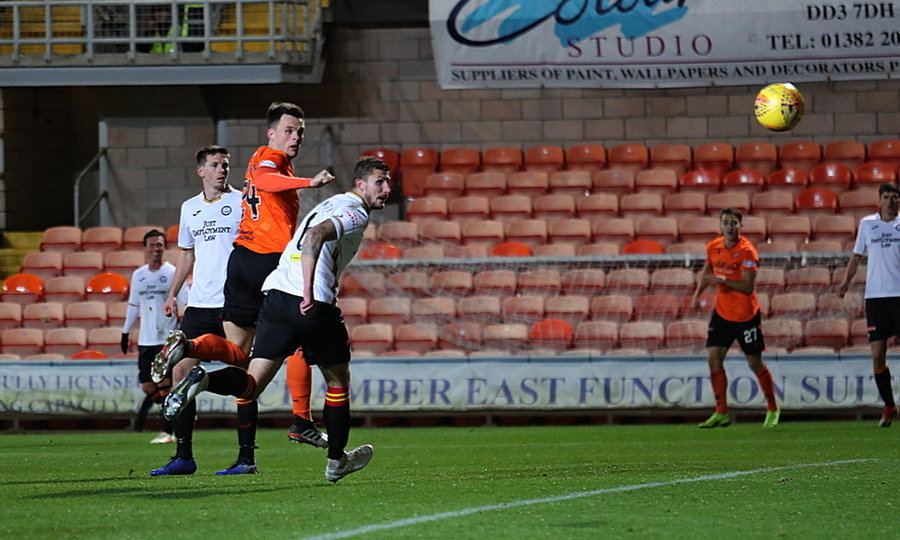 United managed to maintain their place at the top of the table with a one nil victory against Partick Thistle who remain two points adrift at the bottom of the table. An excellent cross from early substitute Louis Appéré gave Lawrence Shankland the chance to head home with United’s only goal of the game.

First Half: The game started badly for Pawlett who was subbed off in the opening minutes of the game and replaced by Appéré after pulling his ham string.

United’s first chance of the game fell on the 10th minute as McMullan played the ball to Appéré who attempted to cross the ball low to Shankland. However, the Jags dealt with this passage of play well and attempted a counter attack which came to no avail.

Seven minutes later McMullan was one on one with Partick’s keeper after Bannigan gave the ball away in his own half. McMullan still had some running to do but from the center of the box he aimed his shot low for it to be smothered by Fox.

With ten minutes of the half to go, Miller had the ball in the net for Thistle after a save from Siegrist but the linesman had his flag up quickly much to the dismay of the away fans.

Just a minute later, Appéré had a chance to cross the ball but he drilled it towards goal forcing Fox to parry the ball into the Eddie Thompson Stand for a United corner.

A largely uneventful first half came to a close after Liam Smith crossed the ball to McMullan who headed the ball into the arms of Fox.

Second Half: United started the second half with a bit more urgency than they had the first. Calum Butcher’s early close-range effort was tipped over the bar by the Jags Keeper.

On the 47th minute, Ian Harkes, positioned on the edge of the box, had a powerful shot blocked from a Partick defender.

One minute later Shankland struck the crossbar with from a left footed shot outside the box.

After a positive start to the beginning of the second half Shankland headed home his 15th league goal in 11 games after Appéré crossed him the ball, making the score 1-0.

With twenty minutes to go Nicky Clark was very close to taking United two goals ahead, with a curling effort from just inside the box. However, it skirted just wide of the post and out for a goal kick.

On the 80th minute Partick came agonisingly close to pulling the score level as Benji attempted to push the ball over the cross bar. It bounced behind Siegrist and rolled along the goal mouth.

The final ten minutes were closer than most fans would have liked but United managed to hold off Partick’s attack.

Summary: United managed to claim all three points in a very close game against bottom of the table Partick Thistle.

Man of the Match: United’s talisman was back in goal scoring form scoring United’s only goal of the game.