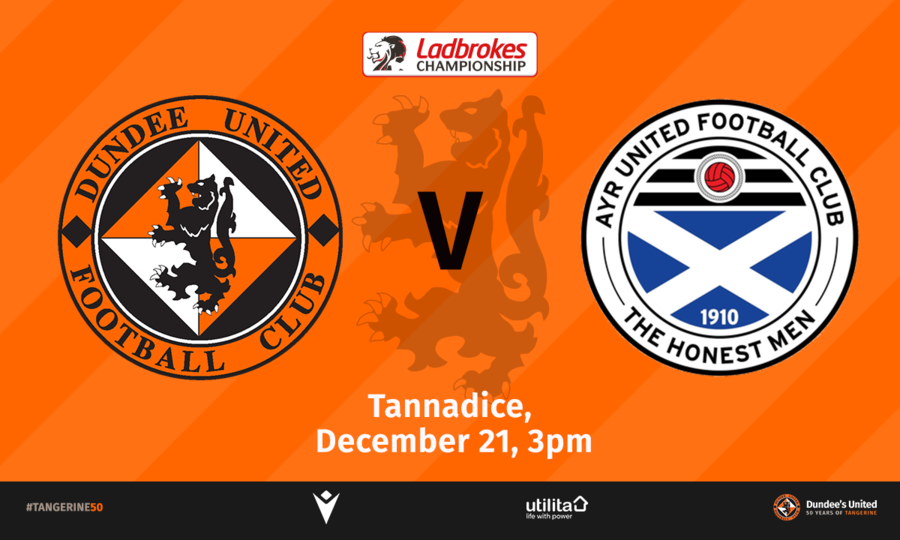 Having gone three weeks without a competitive fixture, the first team returned in top fashion last week by taking maximum points from the week with three wins out of three.

After hosting a 2-1 win over Alloa at Tannadice, we made the trips to Morton and Arbroath, two incredibly tricky venues made all the more difficult by the weather conditions, but we returned victorious with 2-1 and 1-0 wins respectively.

It makes it eight wins in a row for the first team ahead of our final match of the second quarter of league fixtures when Ayr United travel to Tannadice this Saturday.

It's been a mixed first half of the season for the Honest Men. After the departure of Ian McCall to Partick Thistle in mid-September, this weekend's opponents joined us as league leaders after the first nine matches. But the second quarter has not been as kind, with just ten points picked up and only one win from their last five matches.

In that same period, we've taken maximum points and have not conceded a goal to an opposition player but having lost down at Somerset Park earlier this season, the lads know how difficult it will be.

Home fans should be advised there will be no cash gates or ticket booths in effect. Tickets can be purchased via the Tannadice Ticket Centre, by phone (01382 833166 option 1) or online.

Buying tickets ahead of matchday will also come at a discounted rate, with adult tickets reduced by £2 and concession tickets by £1. Fans with smartphones can buy online up to kick-off and scan at turnstiles in both the Eddie Thompson and George Fox stands.

On matchday, supporters with smartphones can also scan the QR codes situated around the peripheral as they approach the stadium to speed up their ticket purchase.

Supporters can also use our food app to order food to collect from the kiosk rather than queuing. For more details please visit here.

WATCHLIVE is also available (£) for non-UK-based fans to watch the action direct to their favourite streaming device.

Foodbank Collection: Saturday will also see the Club host a Foodbank collection in association with our Community Trust as well as by Dundee Foodbank, Taught by Muhammad, ArabTRUST, and ULT83.

While the collection centres around Tannadice on the day of the game (21 December), there are additional drop off-opportunities available in the run-up to the game courtesy of the Snug and Balmore Bar. Both will accept donations on Thursday and Friday between 5pm and 11pm and on Saturday from 11am.

Supporters are encouraged to give what they can either at the match or can donate money via this year’s JustGiving campaign.