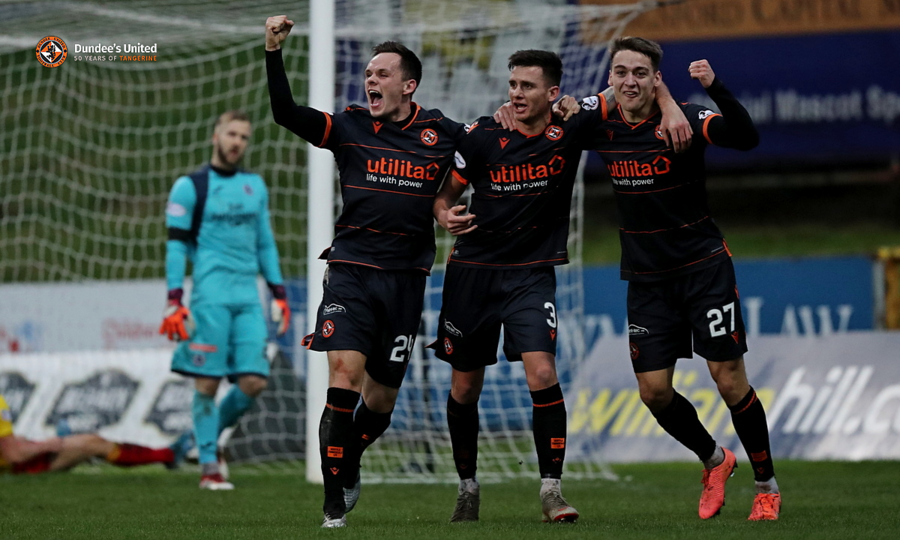 A Lawrence Shankland hat-trick and an Adrián Spörle counter earned the Terrors a comprehensive victory at the Energy Check Stadium.

Understandably, given that they were playing a new system, it took the side a wee while to settle, but once they did, they defeated Thistle in clinical fashion to make it 12 games without defeat and open up a 17-point gap at the top of the table.

Injuries forced Head Coach Robbie Neilson into making two changes from the side that defeated Queen of the South last week. Calum Butcher hadn’t recovered from his groin injury and Jamie Robson was also ruled out due to the eye injury he sustained at Palmerston. That meant there was a debut for new signing Dillon Powers in midfield with skipper Mark Reynolds taking over at left-back. On the bench were Peter Pawlett and Osman Sow back from injury and Kilmarnock respectively with the week’s other new signing defender Kieran Freeman also a substitute.

Of course, it was just a relief for all traveling Arabs that the game went ahead after Willie Collum gave the pitch the thumbs up 90 minutes before kick-off. Indeed, the surface was in good order considering the torrential rain that had ruled out so many other games.

After a minute’s applause for Jags' benefactor Colin Weir who recently passed, United kicked off in their all-black change strip.

Thistle were first to threaten winning a corner after four minutes which Benji Siegrist collected cleanly. Immediately afterward, Lawrence Shankland got on the end of a Nicky Clark header, but his back header was easily saved by Scott Fox.

Newcomer Powers made an impressive start and was the fulcrum for setting up an attack which saw Declan Glass firing in a shot that slipped past the post after 15 minutes.

The first goal attempt of note came on 26 minutes when Glass drilled in a sharp low shot from 22 yards which Fox had to look lively to hold.

As the game opened up, Thistle replied with Reece Cole cutting inside to drill a fierce grounder which Siegrist saved with his feet.

Saunders was booked for bringing down Glass and shortly afterward the youngster fired just past.

On 34 minutes, Siegrist made another crucial save, blocking a Kenny Miller at point-blank range.

At the other end, Fox was happy to keep out Clark’s effort from distance with his feet with a defender heading the ball away for a corner.

The deadlock was finally broken seven minutes from the interval. A clever Clark through ball found Shankland who won a corner with a shot on the turn.

From it that pairing combined again with Clark delivering the cross from which Shankland scored with a close-range glancing header.

On the stroke of half-time United doubled their lead. Shankland angled a pass out to Glass whose shot was turned over the line by Spörle for the Argentine’s first league goal and second for the Club. 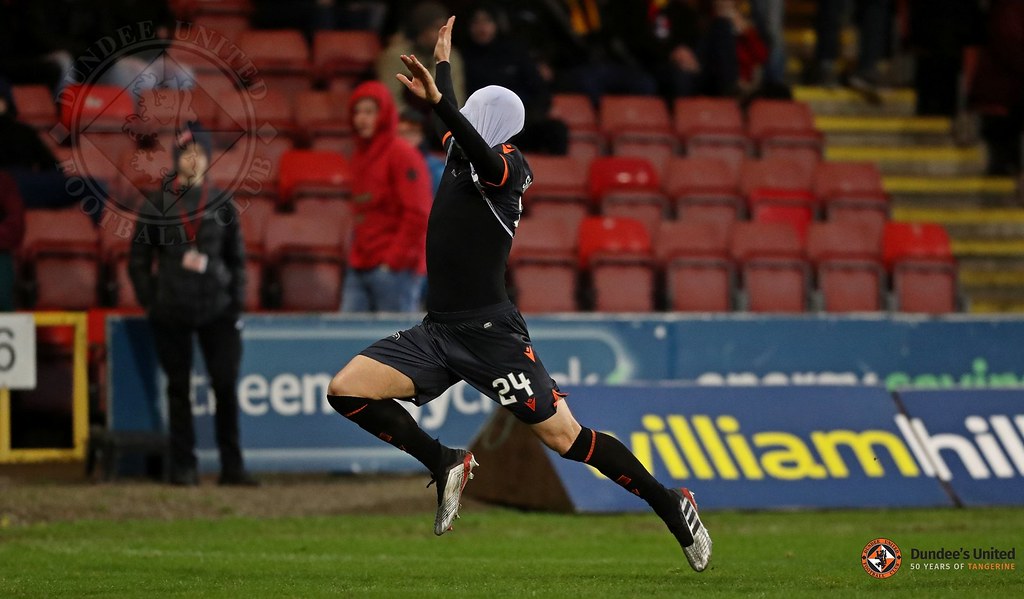 Thistle made a change at the interval with Alex Jones being replaced by Tommy Robson.

Keeping things tight at the start of the second half, Thistle only threatened after 58 minutes when a Zanatta run was ended at the expense of a corner.

And on the hour mark, United surely made sure of victory with a magnificent third. Lawrence Shankland soared down the left before cutting inside and ramming a right foot shot inside the far post.

And six minutes later the 1586 Arabs were in full voice as that man Shankland scored another, finishing off a lightning counter-attack.

The newly introduced Pete Pawlett raced down the left and cut the ball back for Shanks to lash into the roof of the net to complete his hat-trick.

With 15 minutes left, Clark had to be helped off after an ankle injury with Adam King his replacement.

Academy Graduate Chris Mochrie, who replaced fellow Academy Graduate Declan Glass, was through on goals but delayed his shot just a shade too long allowing the defender to get a partial block on his effort and the ball fell gently into the arms of Fox.

With three minutes left, Kenny Miller volleyed in a consolation counter for the home side after Ben Siegrist had saved the initial pile-driver from Cole.

Man of the Match: Ben Siegrist had two crucial saves to put him in the running, but it is impossible to ignore Shanks with his hat-trick which takes his season’s tally to 24.