RESERVES RUN RAMPANT AGAINST QUEEN OF THE SOUTH 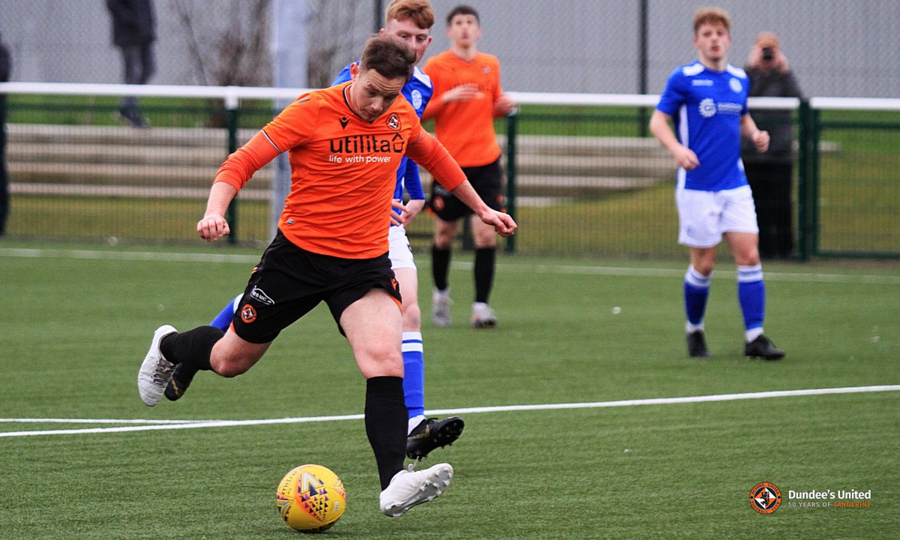 An experienced Reserves side put Queen of the South to the sword this afternoon in a 7-0 thrashing at Whitton Park.

Goals from experienced first team players Peter Pawlett, Osman Sow and a Cammy Smith double had the Terrors four goals to the good by half time. The trialist added a fifth with youngster Jake Davidson scoring a brace to complete the scoring.

With the Under-18s still working hard at their training camp in Spain, it was no surprise to see a wealth of experience grace United's starting XI. Pawlett, Sow, Smith, Deniz Mehmet and Adam King were the first team members involved, along with Sam Wardrop making his return after almost exactly a year out injured.

It didn't take long for the Terrors to go in front with Pawlett and Sow combining on the edge of the box. United's towering striker played a neat backheel for the playmaker to run onto and he calmly slotted it past the Queens keeper on nine minutes.

A second goal in as many minutes followed as Sow got himself on the scoresheet. After powering himself into the box with a driving run, he fired a low shot across the face of goal and into the bottom corner.

United's third almost arrived in the 24th minute when King was fouled on the edge of the box and he acted instinctively to take the free kick quickly and catch the Queens defence off-guard. This move allowed Smith in behind, but he was denied by the leg of the keeper.

Two minutes later, Davidson had a pop from outside the box after muscling the defender off the ball, but he drilled his shot straight down the throat of the keeper.

But in the 36th minute a third goal did arrive via the foot of Smith. A ball into the six-yard box caused havoc, with a small scramble taking place to make the first contact, and it was United's number eleven who knocked it over the line.

He wouldn't have to wait long for his second as three minutes later he was celebrating again. Pawlett drove the ball forward and, with the keeper rushing out, acted unselfishly by slipping the ball across to Smith for a tap in.

On the stroke of half-time, Sow struck a stunning volley on target at the back post and only a brilliant save by the keeper to palm it wide prevented a fifth.

There was no sign of any let-up by United at the start of the second half with Wardrop looking to mark his return to action with a goal. Picking up a loose ball on the right, he powered forward into the box but pushed his shot just inches over the bar.

It did take some time for United to find the back of the net again but it eventually materialised in the 68th minute. Alassan Jones, who had replaced Pawlett at the interval to keep him fresh for Sunday's Scottish Cup tie against Hibernian, gifted the trialist a tap in after playing a spectacular low cross into the middle of the box.

As we entered the final ten minutes, Davidson contributed his first goal of the afternoon, dinking the ball over the keeper following a fine assist from Smith.

And then in the final minute, the full-backs combined as Kieran Freeman played a deep cross to the back post for Davidson to strike home first time.

After the match, Head of Player Pathway and Loans Brian Grant said, "I thought first-half there was some very good combination play. Without being too disrespectful to Queen of the South, we had quite a number of first team players getting some valuable game time, so physically and experience-wise, we were well ahead of them. So, it became quite easy at times.

"But the guys' standards and professionalism was spot on, particularly in the first-half when they went about it in the right manner and took a very commanding lead which should have been more."