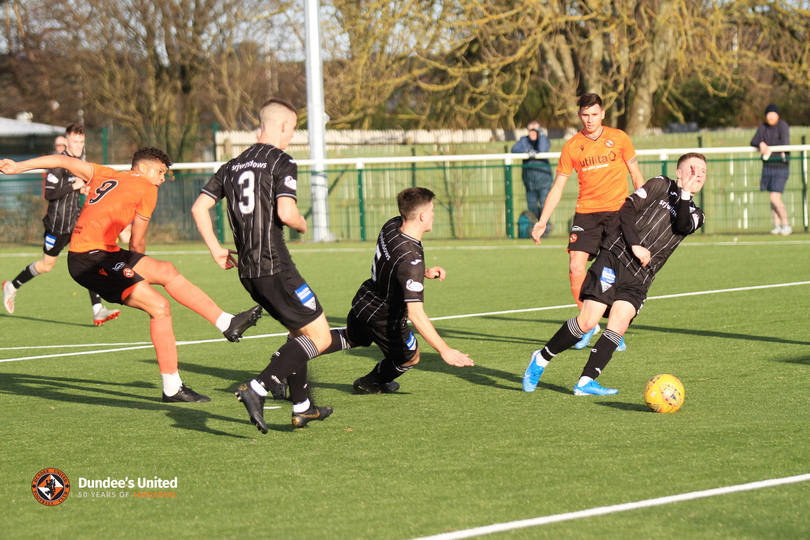 The Reserves made it back-to-back league wins for the first time since September as they eased past Dunfermline at Whitton Park with a 3-1 win.

Osman Sow struck a brace in the opening 45 minutes to leave United flying at the interval. It looked like it might have been a nervy final few minutes as Gregor Jordon pulled one back for the visitors with five minutes remaining, but Archie Meekison put the game to bed within 60 seconds of the restart with a stunning finish from 30 yards out.

It took a while for the game to settle, with the first clear chance on goal not coming until the 12th minute. A corner into the box from Declan Glass was kept in the danger area courtesy of Lewis Neilson and Sow, allowing Chris Mochrie to nod a flicked effort towards goal, but Craig Burt managed to snatch the ball out of the air for Dunfermline.

United looked dangerous from set-plays as six minutes later, Glass picked out Sow with a low delivery but the strikers first-time shot was blocked before it could hit the target. Then in the 23rd minute, Neilson latched on to Glass' delivery at the back post and while he managed to head his effort on target, it needed more power to trouble the keeper.

Glass had been dangerous throughout the opening minutes, so it came as no surprise that he was the architect for United's opening goal. The 19-year-old went on a darting run through Dunfermline's defence and made it to the by-line before lifting the ball into the six-yard box, gifting Sow the simplest of finishes.

United didn't have to wait long for a second with Mochrie having the biggest influence on the outcome. With Dunfermline's keeper in possession of the ball, the 16-year-old piled their backline under pressure with a high press, forcing a mistake as the ball was played to Sow, and the striker made no mistake with the finish.

Mochrie was then almost on the scoresheet himself on the stroke of halftime as he went on a gut-bursting run from within his own half to inside Dunfermline's box, but he pulled his shot just inches wide of the top corner.

The intensity of the match dropped significantly after the interval, with just a few chances coming for both sides.

United went close on 52 minutes to adding a third when they were awarded a free kick in a dangerous position on the edge of the box. Glass layed the ball off for Sow to have a strike, but it was deflected into the arms of the keeper at the near post.

Then in the 76th minute, Mochrie thought he scored a wonder goal when he fired a curling effort from 25 yards out which had the keeper beat. But his dreams were dashed when the ball cannoned off the crossbar.

With five minutes remaining, the Pars pulled a goal back. Deniz Mehmet had initially made an excellent save to prevent Matty Bowman's free kick from nestling in the bottom corner, but the ball remained in play.

It made it's way back to Josh Robertson on the edge of the box who shot through a crowd of bodies. Luck was on their side as the ball fell to Jordan in the six-yard box and he simply flicked the ball over the line to half the deficit.

Meekison, however, ensured it would not be a nervy end to the match for United as he produced a showstopper by burying a shot, from all of 30 yards out, into the top corner.

Player Transition Coach Dave Bowman said: "I thought it was really good. It's always hard, because we had a strong team - a team that could probably play in the Championship itself.

"In these games when you're playing against young boys you're on a hiding to nothing. If you don't perform you get looked at, if you win then it's what is expected. They are expected to win but I thought the manner they went about it they competed well all over the park and controlled the game.

"Dunfermline, to be fair to them, made it hard for us by keeping people behind the ball. But we were patient enough and scored three really good goals."