YOUNG TERRORS BATTLE FOR A POINT IN GLASGOW 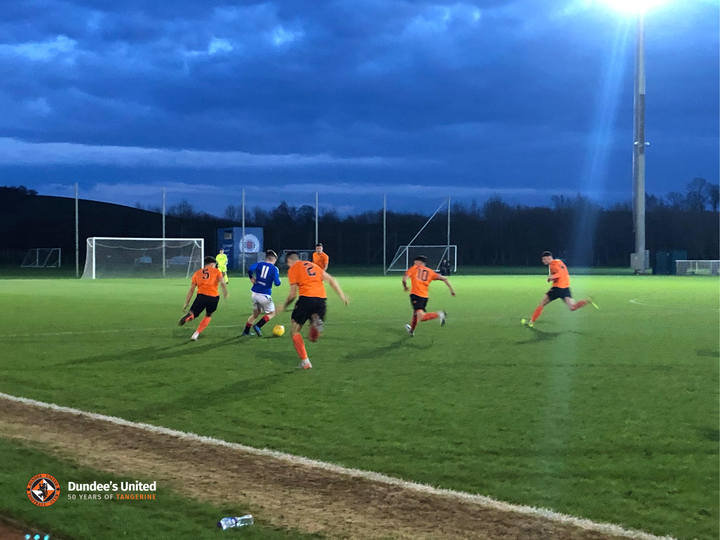 After a tough couple of weeks, the Young Terrors responded with a 1-1 draw away at Rangers.

The Dark Blues hadn't dropped a single point all season before United arrived at the Hummel Training Centre and it looked like they were going to keep their winning record going when Chris McKee fired them in front midway through the first half.

But a first goal of the season for Rhys Caves, against his former side, shortly after the interval was enough to see the Young Terrors take a point back to Dundee.

The opening quarter of the match wasn't a classic and it took until the 17th minute for either side to create a chance. It was Robbie Fraser who was the architect for the hosts when he slipped the ball through for McKee, who fired a low effort over the line.

Rangers could have doubled their advantage two minutes later if not for some fine reaction defending from Adam Hutchinson. David McClelland connected with Fraser's corner at the backpost, but saw his goalbound header flicked on to the bar by the 16-year-old defender.

The woodwork would deny the hosts once again in the 34th minute when Ross McCausland collected a deep cross in the box but his effort cannoned off the bar.

Murray Miller would then try his luck from the edge of the box, but sha fantastic diving save from 15-year-old Reece Beveridge kept him out.

The Young Terrors came flying out the traps at the start of the second half and after just five minutes were back in the game through Caves. The 16-year-old midfielder read the passage of play between the two centre-backs brilliantly as he intercepted the ball on the edge of the box before netting his opening goal of the campaign.

Umaro Balde thought he had restored Rangers' lead five minutes later but the referee disallowed the goal for a handball in the buildup.

It looked like the hosts might have got their second goal six minutes from time when a low cross was delivered into the six-yard box, but a brilliant last-ditch block from Flynn Duffy ensured the Young Terrors would go on to secure the point.

"I'm delighted for the players," said Head Professional Performance Coach Adam Asghar. "There were a few messages that were said in the last week after the Reserve game and the disappointing defeat to St Mirren. But in the second half, the togetherness that was shown, the grit, desire and work rate they showed for each other was incredible.

"In possession, it was by no means our strongest performance, but in terms of deserving a result, I thought they more than deserved the draw.

"I said to the boys you can come here and play Rangers, a team who haven't dropped a point all season, and go into your shell or you can rise to it and really get something out of it.

"So, in terms of the confidence coming back the players should take confidence from that because all of the questions, 'can they work as a team?', 'can they show the desire to get over the line?', they more than showed that today. I'm really proud of them."

Highlights and full reactions from Asghar and Caves are available here.