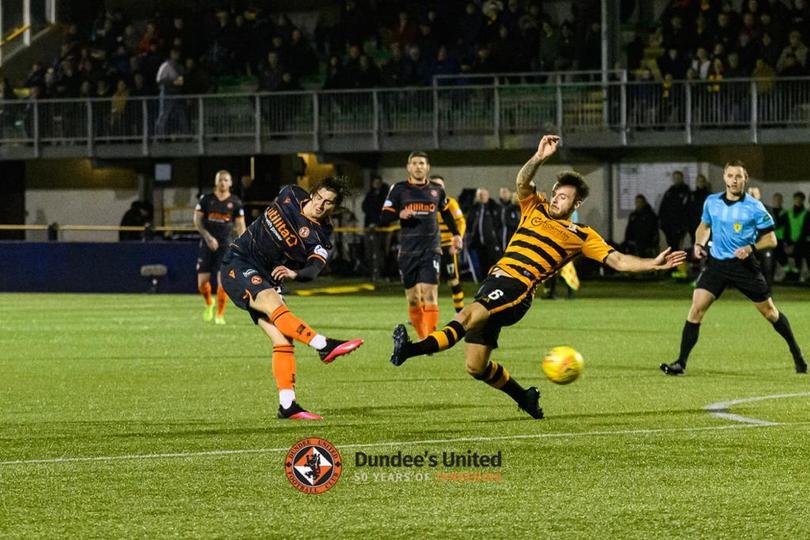 United’s lead at the top of table increased to 18 points after a 0-0 draw at the Indodrill Stadium where they were unable to secure victory despite dominating large periods of the game.

Following the defeat to Arbroath two weeks ago, Head Coach Robbie Neilson made three changes. Paul Watson returned in place of Mark Reynolds in central defence, while Ian Harkes took over from Adrián Spörle in midfield and new signing Rakish Bingham made his debut up front taking over from the injured Osman Sow.

Reynolds and Spörle were on the bench along with four Academy Graduates - Declan Glass, Kieran Freeman, Lewis Neilson and Archie Meekison, a last minute call up after Louis Appéré was injured in the warm-up.

Starting purposefully, United immediately had an attempt on goal with Lawrence Shankland spooning a shot over the bar from a Jamie Robson cross. Maintaining the momentum, Shankland had shot blocked after six minutes.

The Wasps first foray upfield a couple of minutes late saw Kevin O’Hara send a tame header straight at Benji Siegrist, and the United stopper was called into action again but Kevin Cawley’s shot from the edge of the box was straight at him.

On 16 minutes Shankland headed over a Pawlett free-kick as United continued to make most of the running.

Midway through the half, United forced their first corner which sparked a spell of sustained pressure but no openings.

On 31 minutes, Pawlett had United’s first shot on target but it was easily smothered by goalkeeper Wright. Then a minute later, Ian Harkes turned a dangerous low cross over the bar while under pressure.

Butcher was booked for a tackle on Iain Flannigan and shortly after Neilson was similarly censured. United finished the half with a bit of a flurry up top putting the Wasps defence under pressure after home keeper Wright flapped at a cross, but as the half time whistle blew, United still couldn’t make their great share of possession count.

The Terrors started the second half with renewed vigour and within two minutes had two shots on target, first was from Bingham and then Shankland. Both were on target and spilled by Wright who was able to collect at the second attempt.

Robson became the second United player to be booked and a minute later, Ben Stirling was cautioned for a foul on Pawlett.

Despite being much more direct chance were proving elusive.

Om 61 minutes Mark Connolly was on the end of a Pawlett corner from the left but his header went inches over. However, Alloa still posed a threat as demonstrated by Siegrist keeping out Stirling’s header from a Flannigan corner with his feet two minutes later.

There was pressure aplenty in the closing stages but all to no avail with Shankland firing over in the stoppage time, the last throw of the dice.

Man of the Match: Rakish Bingham impressed on his debut with some neat touches, but the nomination goes to skipper for the night Calum Butcher who did his utmost to drive the team on to victory at the Indrodrill Stadium.