CHALMERS PRODUCES THE SPECTACULAR FOR THE RESERVES 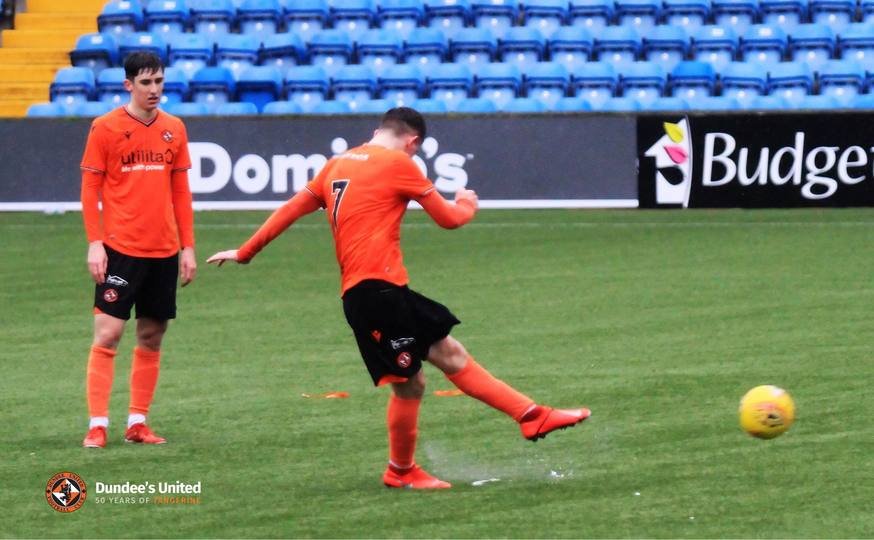 Having gone almost three weeks without a fixture, the Reserves returned to action this afternoon at Rugby Park, and they didn't let the rain dampen their performance as the boys produced an excellent display to take a point back to Dundee.

After end-to-end stuff in the first half, the hosts took the lead through fortunate circumstances when Josh Walker knocked the ball into the back of the net.

It looked as though it was going to end in defeat, but five minutes from time, Logan Chalmers rescued the draw with a stunning free-kick into the top corner which would have had any keeper beat.

With an experienced starting eleven, Killie looked to get on the scoresheet early when Tam Brindley burst past Nathan Cooney to get to the byline. He pulled the ball back to Kyle Connell on the edge of the area but fired his shot straight into the arms of Josh Donaldson.

Momentum then swung in United's favour and the hosts had veteran keeper Jamie MacDonald, who was returning after a long spell out with injury, to thank for not going behind.

The first chance came in the 11th minute when Darren Watson fought off his marker before being allowed to shoot. He tried to beat MacDonald with a neat flick, but the keeper was alert and reacted quickly to parry the ball away.

Six minutes later, Chalmers - who was proving troublesome for Kilmarnock on the right-wing - charged into the box and unleashed a powerful shot on target but MacDonald held it at his near post.

Donaldson might be at the other end of his career in comparison to MacDonald, but he proved just as valuable in the 22nd minute when he kept out Connor Johnson. The centre back was picked out at the far post and powered a free header towards the top corner, but Donaldson produced a spectacular reflex save to tip the ball over the bar.

Declan Glass continued to target the right-wing for United as he broke into the box and cut the ball on to his left foot before skimming a shot across the surface, but MacDonald held it comfortably.

Killie blew a massive chance to take the lead in the 32nd minute when Connell lifted the ball into the six-yard box for Innes Cameron, but the towering striker headed wide from close range.

Five minutes later, Watson did brilliantly for United by keeping the ball alive after being closed down in the far corner. He managed to slip the ball to Glass, but the hosts loaded the box to see the shot out for a corner.

Kilmarnock when then dealt a blow on the stroke of half time when MacDonald signalled to be taken off, and he was replaced by Jamie Walker.

United started strongly after the interval but found themselves behind in the 55th minute in unfortunate circumstances. Donaldson produced a top-class save to keep out Connell who had vollied the ball towards the bottom corner. But the ball spun back into the air and came back off the crossbar into the path of Walker who simply tapped home.

Things could have got worse seven minutes later when Ally Taylor picked out Connell with his delivery to the far post, but the striker could not get his header on target and the chance was wasted.

United grew back into the game and came close to equalising in the 73rd minute when they hit Kilmarnock on a quick counter-attack through Watson. The young forward used his pace and power to charge into the box from the halfway line, but he just couldn't direct his shot on target as the ball flashed across the face of goal.

Another ambitious United run would lead to the equaliser 12 minutes later. After picking the ball up just outside his own box, defender Adam Hutchinson powered forward through the middle of the pitch.

He linked up well with Chris Mochrie in the centre circle, as they played a quick one-two, before continuing his run towards Kilmarnock's box. This led to a scramble as the hosts tried desperately to clear the danger, but the ball struck off the arm of a blue shirt and United were awarded a free-kick 20-yards from goal.

Chalmers, who has produced some spectacular finishes for the Reserves already this season, added another one to his highlight reel as he rifled the ball into the top corner, with it crashing off the underside of the bar on its way in.

It was no more than United deserved and Player Transition Coach Dave Bowman was full of praise of his young squad after the match.

"I actually thought it was a really good game," he said. "Sometimes when you're a coach you don't enjoy watching from the sidelines but I really enjoyed watching that today. Both teams played a lot of good football throughout the 90 minutes.

"The only downside is their goal. Josh makes an unbelievable save but their player is first to react while we are caught on our heels. But with Logan's finish, it doesn't matter who is in goal because the free-kick is brilliant.

"I didn't think there was a weakness at all in the team. A lot of them are still only 16 and it's their first season. They're coming down to places like Rugby Park and performing against experienced players in comparison to us. There are a lot of positives to take out of it."

Highlights and full reactions from Bowman and Hutchinson are available now.

Next up for the Reserves is a home match against Ross County on Monday 16 March. It's a 2.00pm kick-off at Whitton Park.