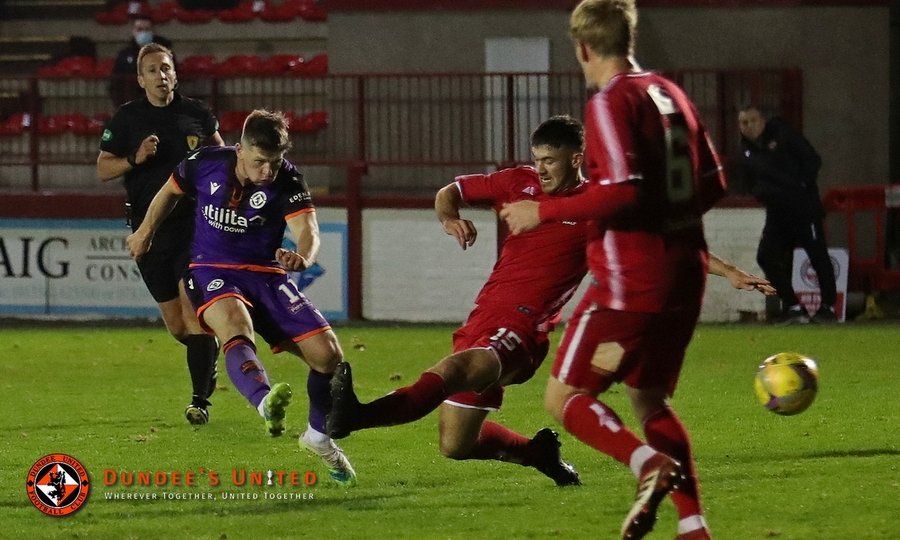 Dundee United enjoyed a goal-laden journey into Angus in the first of their League Cup group stage fixtures. The 6-2 scoreline tells the story, with the tremendous pace and firepower of the Tangerines' frontline proving far too much for their spirited League 2 opponents to cope with. A full sixteen United players saw action, several for the first time this season, with an encouraging number of Our Academy Graduates seeing plenty of game time.

United set out a strong team against a Brechin side experiencing their first competitive fixture since the COVID lay-off. In the opening ten minutes or so, Brechin looked full of unleashed energy and a desire to start their season in the right way, attacking with pace and peppering Deniz with shots.

For all Brechin’s enthusiasm, it was not long before United asserted their dominance. Harkes saw his shot spilled back into the box and Clark, starting upfront, swept the ball confidently home on the sixteenth minute. Just two minutes later, Clark was again on the front foot, attacking a cross in from the right, curling it home to make it 2-0 United with less than twenty played.

Brechin didn’t allow their heads nor their intensity to drop despite being two swift goals behind. Our Academy Graduates Robson and Neilson had plenty of defensive work to do cutting off attacks down the flanks, but they proved more than equal to the challenges posed in the first half. The best chance for the home side resulted from a defensive lapse, with a backpass putting Deniz under pressure, resulting in a Brechin shot that Edwards had to clear off the line.

It was United’s attack that really brought heat and light to the cold autumnal night. Our Academy Graduates Robson and Appéré linked well with the highly-charged McMullan to terrorise the left flank and create a series of chances. McMullan burst down his wing on the 40th minute, his energy igniting an attack that soon saw Butcher tee’d up beautifully at the edge of the Brechin area. The midfielder hammered home a strike that would have pleased many a forward.

The second half saw the purple-clad Terrors attacking up the Glebe Park slope, but the gradient proved no impediment to tempo. If the first half thrills had come courtesy of United’s left side, it was quickly clear that Our Academy Graduate Neilson and Bolton were keen to get in on the act on the right in the second half. Birthday boy Luke Bolton attacked at pace shortly after the restart, crossing in to Harkes who slotted a fine curling ball into the lower left side of the net.

United can perhaps stand accused of a collective lapse in concentration after going four goals up. Brechin, who had applied intermittent pressure throughout the contest, suddenly found their efforts rewarded. A clumsy challenge granted Brechin a penalty which they successfully converted, and further collective lapse less than two minutes later allowed Brechin’s Currie to find a shooting opportunity from the right of the United area, and the ball again found the net.

The setbacks acted as smelling salts to revive the United threat, and it was not long before substitute striker CammySmith found the net to make it five and secure the result. Micky Mellon had also opted to make it five, bringing on the maximum number of substitutions to distribute useful minutes throughout the squad. Powers, Smith, Pawlett, Connolly and Our Academy Graduate Kai Fotheringham were all cycled on to the pitch across the second half. Despite these changes, United retained their cohesion, and saw the game out with purpose and professionalism.

Cammy Smith scores number six on the night right on full time, to achieve a familiar scoreline that will please the United support, and round off a performance that will satisfy Micky Mellon and the wider coaching staff.