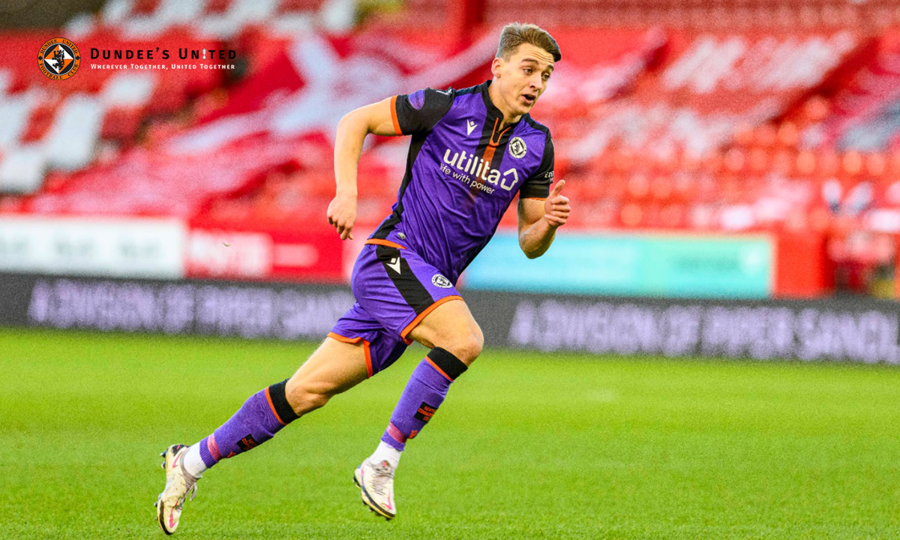 The Terrors started the New Year with an impressive performance away from home as they enjoyed the bulk of the chances in an entertaining scoreless draw against third-place Aberdeen.

The saltire flapped at half-mast above the empty Merkland Road stand as Dundee United and Aberdeen met in the centre circle ahead of kick-off. The teams shared a minute’s silence in memory of United and Scottish football legend Jim McLean and Aberdeen's former player Chic McLelland. A poignant moment and one surely shared with supporters of both sides around the country and across the globe.

The Terrors lined up with three of Our Academy Graduates in the starting line-up, with Louis Appere, Jamie Robson and Lewis Neilson all named in the XI. There was plenty of Aberdeen expertise in the team, too, with four United players having previously experienced football in the Granite City.

United looked to draw first blood through a brilliant solo attack from Lawrence Shankland. The striker dragged the ball past one defender, cut across the edge of the Aberdeen area to create space and then exploded a shot goalward. The effort cannoned off the woodwork.

The opening half an hour had plenty of ebb and flow. The home side displayed an organised midfield and created chances from the set-piece. Shots on target by Hedges and Hoban warmed Benji Siegrist up for the game, without posing a serious threat. United’s brightest moments in the first half came on the counterattack. The wily movement of Clark, and the staunch hold up play of Our broad-backed Academy Graduate Appere, combined to set Shankland loose up top on several occasions.

As the half wore to its conclusion, the home team began to exert a throttling control of possession and territory that United struggled to resist.

United firmly shook off Aberdeen’s first-half grip of the game after the restart. The Terrors were far more advanced, with Clark, Our Academy Graduate Appere and Shankland all engaging the Dons defence far higher up the pitch.

Our Academy Graduate Neilson had been promoted to the starting eleven after Ryan Edwards injured himself in the warm-up. The young man excelled. On the hour mark, he battled Aberdeen’s Cosgrove off the ball and barrelled confidently forward. He carried until he was fouled, winning a set piece in a dangerous area. Nicky Clark struck a fine free kick, slotting it into the space between defence and goalie. Mark Connolly was first to the ball, but it ricocheted off his stomach and into Lewis’ gloves.

United linked together a chain of chances as the clock wound down. Lawrence Shankland – that man again – came close to winning it for United late on with a lovely effort,  but Lewis did well to palm wide. Minutes later, Our Academy Graduate Jamie Robson sprinted forward on the counter leaving the Red Wall of defence far behind, but the young talents’ strike was well over the bar.

The three minutes of additional time saw the purple, black and tangerine clad Terrors dominate, flashing balls into the box and forcing the Aberdeen backline into last-ditch defending. There was not the time to find a winner, and the game finished goalless.