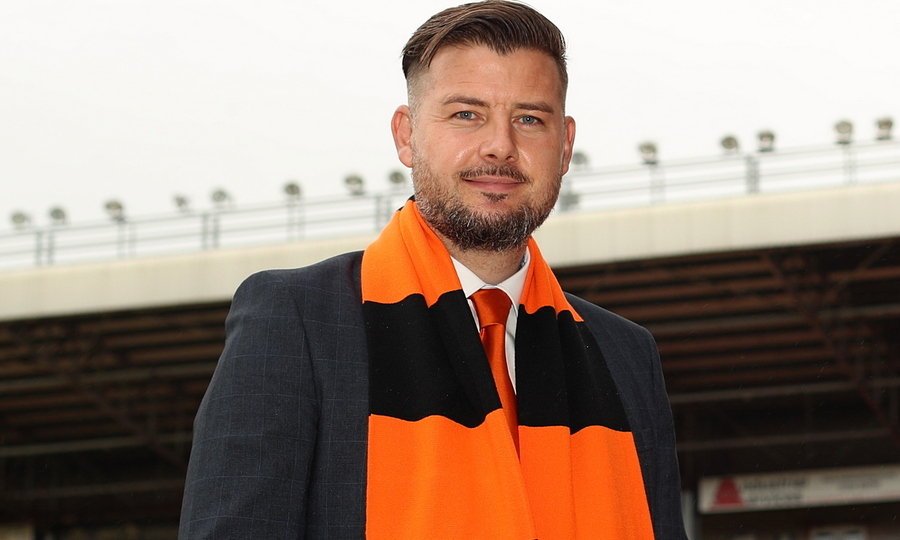 Dundee United is pleased to officially confirm the appointment of Thomas Courts as the Club's new Head Coach.

The 39-year-old steps up from his role as Head of Tactical Performance and now looks forward to the players returning for pre-season training as we gear up for our season opener at Kelty Hearts in the Premier Sports Cup on July 9th.

"I feel really excited and privileged to be taking charge at Dundee United," Tam told DUTV. "When I got the offer to speak to the Club I was optimistic because I felt I was ready for the challenge.

"At each part of the process, I felt that I gave a good account of myself and articulated my vision for the Club moving forward and, thankfully, I'm now sitting as the new Head Coach of Dundee United Football Club in the Scottish Premiership.

"I've got 300 games under my belt as a manager. The fans are getting an experienced manager, one who has a proven capability of winning, developing players and also being open and receptive to giving opportunities to young players as well.

"This is where I want to be, the calibre of player I want to work with on a day-to-day basis and this is the stature of club I feel I can propel myself into and drive the Club to the next level.

"There has been a little bit of energy online surrounding the appointment but I want to harness that energy. I've seen the fans at this ground suck the ball into the net and turn Tannadice into a cauldron in the Dundee derby. Any energy that has been online is something I want to harness and redirect on to the pitch when the fans come back into the stadium.

Following five years in charge of Kelty Hearts as manager, Tam arrived at Tannadice in January 2019 when he was appointed Head of Tactical Performance at Our Academy.

Last season he stepped up to coaching the Under-18s squad for their first season in the CAS Under-18 Elite league and took charge of the team for 10 days last December when a number of first-team staff were unavailable due to COVID-19.

Joining Tam as his assistant head coach will be Liam Fox. Liam arrives from Livingston FC where he was Assistant Manager to David Martindale, achieving top six and a League Cup final in his time there. Liam is a UEFS Pro licensed coach and will be a great addition to the coaching setup at Dundee United.

"The Board and I are pleased to have Tam & Liam leading our first team," said Sporting Director Tony Asghar.

"We have been extremely impressed by Tam since he joined the Club 18 months ago and I believe he is an excellent appointment with a tremendous skill-set that can only enhance what we have already in place.

"He has demonstrated an incredible work ethic, a real passion for the Club and the players and a confidence in his own abilities to step up and take charge of the first team.

"We want to build on what we have achieved in the past two seasons and improve our league position and Cup performances.

"It is an extremely exciting time - we are hoping a full Tannadice Park is a real possibility in the near future - and as a Club we are progressing in accordance to our long-term performance strategy.

"Tam being in charge - his skillset as a good coach, a strong motivator and someone who is obsessive about development and fine detail - merges with the culture of what we are trying to achieve.

"The senior players within the Club, as well as our younger players, will benefit from working under Tam and this will be an integral part of achieving success in our objectives.

"Liam is a highly respected coach - who achieved success last season - and fits directly into what we are aiming to achieve. He holds a UEFA Pro Licence and has vast experience on the training ground, working with Scottish Premiership players.

"It is an exciting team who I am looking forward to working with."