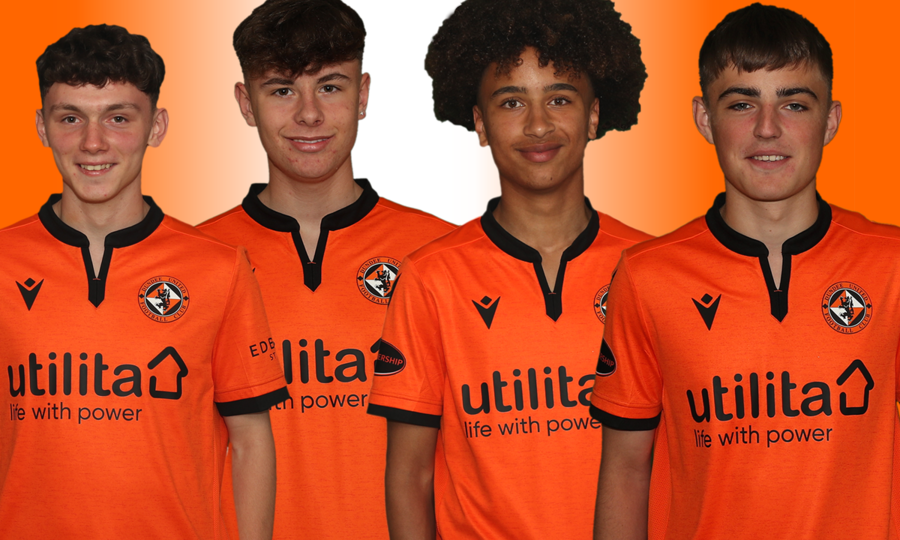 Following one of the most challenging years for youth development, Dundee United is proud to announce that four Academy graduates have signed full-time professional contracts at Tannadice.

Lewis O'Donnell, Craig Moore, Bryan Mwangi and Stuart Heenan have committed their futures to the club, allowing them to focus their full attention on their development under the performance staff of our Elite Academy.

"We are delighted to secure the futures of Craig, Lewis, Stuart and Bryan by rewarding them with their first professional contracts," said Academy Director Andy Goldie. "All four have experienced their own unique journey so far and we look forward to enhancing that with even greater support within the full-time environment.

"It’s an exciting time for everyone at the club but no more so than for the young players in Our Academy – however, they must continue to be relentless in their efforts to improve every day if they are to earn further rewards in the future.

"They watched eleven graduates feature in the First Team last season with Kerr Smith (16), Darren Watson (17), Kai Fotheringham (17), Lewis Neilson (17), Kieran Freeman (20) and Archie Meekison (18) all making their debuts, but it’s imperative they understand how hard they have to work if they are to follow in their footsteps, if not displace them. All four have merited achieving their first career milestone and we’re excited to see what more they can achieve in the coming years.”

Lewis first joined the club aged nine and has continued to go from strength to strength. Despite only turning 16 this month, Lewis has earned a regular starting position for the Under 18s having been integrated with the squad over the past two years. He is also part of this month’s Scotland Under 17 Training Camp in Largs. He is a technically strong, box-to-box midfielder who provides the team with an attacking threat in both assists and goals.

“I am buzzing to sign my first professional contract with Dundee United after being at the club for over six years now. I play as a central midfielder and enjoy getting on the ball in the middle of the park and being direct with my play to help contribute to the team scoring goals.

"My aim is to have good consistent performances with the Under 18s and make that step up to the Development Squad and then into the First Team as quickly as possible and cement my place in the team. I would like to thank all the coaches at Dundee United for helping me progress as a player and get the best out of myself as a person as well.”

Bryan is the latest player to join Our Academy from Hutchison Vale Boys Club in Edinburgh, following in the footsteps of Declan Glass, Jacob Comerford and Ruairidh Adams. Bryan has impressed with a series of standout performances with our Under 18s squad, in a condensed season, demonstrating technical quality and creativity in possession of the ball.

“I'm absolutely delighted to sign my first professional contract with Dundee United after 6 years at Hutchison Vale, where I have learned immensely as a player from all of my coaches, to which l will forever be grateful. Subsequently, since I started training as a trialist with the Under 18s back in April, I felt this was the right place for me to continue my footballing journey with the end goal being to earn a contract, and to be able to do that is an unbelievable feeling and something I've always dreamed of.

"Looking ahead I feel that I can continue to improve on my overall game and become the player I aspire to be and learn new things through different experiences here at Dundee United. l pledge and aim to consistently improve as a player and to get a lot of games under my belt in order to become the best footballing version of myself and through hard work get experiences with the First Team.

"Being around the Under 18s has really benefited me as a player and a person. The playing style in the Under 18s squad is something that I believe suits me and it's a place where I can continue to get the best of myself. Since I've been here I've learned a lot from Andy, Adam Asghar and Tam Courts as their advice has really impacted me in a positive way allowing me to go express myself on the pitch and hopefully will enable me to maximise my potential.”

“I’m over the moon and proud to have been given a professional contract and wants to do the very best I can, work hard to hopefully make it to the First Team. My game is based on scoring goals and, although I know this will be more challenging now moving into the Under 18s, I hope to continue this next season.

"I’d also like to thank Colin Cusack and everyone at Fairmuir for everything they have done to support and develop me before coming to Dundee United and to all the coaches who have helped me in the Academy as I’ve improved a lot since joining.”

Craig has been with the club since the age of nine having joined from Arbroath Lads Club. At just 15 years old, he graduates from the Scottish FA Performance School programme having already played for the Reserve Team two years ago and subsequently been part of the Under 18s squad the past two seasons. He is an energetic, combative midfielder who loves to break forward to support the attack.

“I'm absolutely delighted to have finally signed my first professional contract for Dundee United. Having been with the club since the age of eight I’ve seen many players over the years come and go and to be one of only four rewarded with a full-time contract. It truly is a dream come true.

"I'm totally focused on breaking into the Under 18s squad as quickly as possible and developing to allow me to start week in week out. Hopefully, after a while, I will have the opportunity to train and learn from players of the First Team. I’d like to thank my family, my dad for driving me all over the country and my Grandad as my most faithful supporter, without them I would never be where I am today. My mum, sister and brother who have also always been supportive and dedicated to help me achieve my ambitions.

"I would also like to thank all the coaches who have helped develop me not only as a player but also as a person over the years. There’s probably too many of them to name but they know who they are. Finally, I would like to thank everyone at the club just now for giving me the chance to sign they clearly believe in me and see something in me as a player and I hope I can repay them for this opportunity sometime in the near future.”