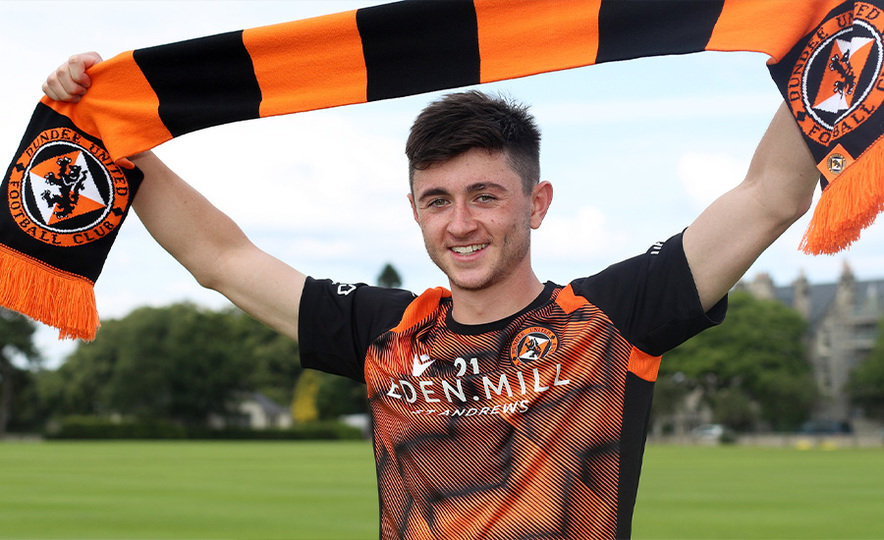 Dundee United is thrilled to announce that Our Academy graduate Declan Glass has extended his contract for a further two seasons, keeping him in tangerine until 2023.

The exciting attacking midfielder arrived at Tannadice when he was 14-years-old from Hutchison Vale Boys Club. He's made 18 appearances since making his debut in 2017, scoring his first professional goal the following season in a Betfred Cup victory over Elgin City.

Declan has enjoyed two successful loan spells in his career thus far. The first came at Airdrieonians in 2019 where he played regular first-team football for the first time before then joining Cove Rangers the following campaign. He hit the ground running at the Balmoral Stadium, being awarded the League Two Player of the Month in August 2019.

In total, he spent six months at the Balmoral Stadium where he helped Paul Hartley's side lead a charge at the top of League Two, contributing seven goals and ten assists. Returning to United in January 2020 and contributing towards the Championship title saw him awarded two league winners medals in the same season.

The 2020/21 season would prove to be the toughest of Declan's career. The attacker joined Ian McCall's Partick Thistle in League One as he looked to add another league winners medal to his tally. But those dreams were dashed before the season had even kicked off as he suffered an anterior cruciate ligament injury in a pre-season match, keeping him out for an entire year.

The long road back is now nearing its end as he eyes a return to training in the next few weeks.

Speaking exclusively to DUTV on the extension, Declan said: "I'm buzzing to get this extension signed. I'm delighted with how I've been treated in my seven years at the club and now I'm looking to kick on after what's been a tough last 18 months with the pandemic and injury.

"The main goal now is to break in Dundee United's first team and make an impact. It was a no brainer to extend my contract as soon as the discussions started.

"The way this club is going and the way I've seen it build I feel like this is the best place for me. I've been brilliantly looked after, the facilities are top-notch and I love the city. Everything has been perfect for me."

Head Coach Thomas Courts said: "Declan has had an extremely difficult year with his injury, but his dedication and attitude throughout his recovery has been exceptional and I'm delighted that he's decided to extend his time as a Dundee United player.

"Declan's an exciting attacking talent and I can't wait to have him back and available for selection in the near future."