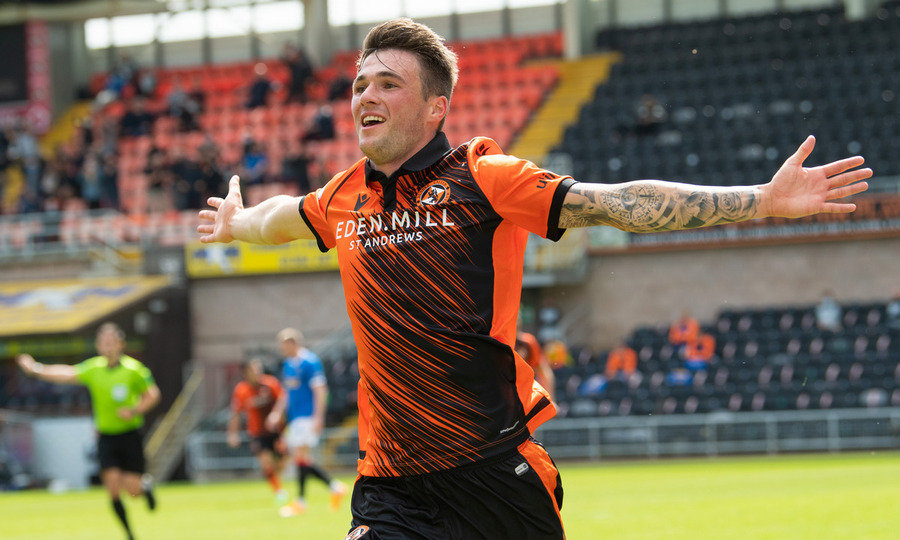 Jamie Robson was the unlikely scoring hero with his first goal since November 2017 and inflicted Rangers' first league defeat since March 2020.

Around 4600 fans populated all around Tannadice for the first home league of the season and they greeted their heroes enthusiastically after almost 18 months in absentia due to Covid.

And the wait proved all the more tolerable as they witnessed one of United’s best displays in a long time.

Head Coach Tam Courts made two changes from the side that went down 2-0 to Aberdeen.

Jeando Fuchs and Logan Chalmers started, replacing Skipper Mark Reynolds, who was on the bench, while Lawrence Shankland dropped out of the squad. On the bench, there were four of Our Academy Graduates in Lewis Neilson, Kieran Freeman, Chris Mochrie and Darren Watson.

The Tangerines kicking towards the Eddie Thompson Stand put Rangers under pressure right from the start, winning two corners in the opening three minutes.

On seven minutes, Rangers threatened for the first time when Joe Aribo cut the ball back to Alfredo Morelos, but the Columbian’s effort was wayward.

Just after the midway point of the opening half, Butcher was booked for a foul on Morelos 25 yards out, but the wall did its job in blocking the resultant free-kick.

The encouraging start by United continued with Chalmers having a shot from the edge of the box blocked.

A routine save by Siegrist from a Morelos header was one of the few occasions the Swiss keeper was called into action.

At the other end, a powerful Pawlett run was arrested by a Connor Goldson tackle that earned the defender an instant yellow card.

Twice in the space of a couple of minutes, United corners caused confusion in the visitors’ defence and on both occasions. Tangerines’ claims for handball went unrewarded.

Charlie Mulgrew was booked for pulling down Morelos three minutes from the interval and James Tavernier floated free-kich from 30 yards narrowly over.

But as the half-time whistle blew, Arabs applauded their heroes for a gutsy performance which not only kept the Champions at bay, but in which they had the better of proceedings.

There was a blow for United five minutes into the second-half when Logan Chalmers had to limp off and Adrián Spörle slotted in.

Playing down the slope towards the Arklay Sreet end, Rangers began to be more dominant.

But on 64 minutes, it was United who broke the deadlock.

Jamie Robson, who as having an outstanding game, played a one-two with Spörle whose chip forward was deflected by Davis into to the path of Robson and he kept his cool to steer the ball past the keeper from 12 yards.

Morelos went close to levelling with a glancing header which slid past the far post with 19 minutes remaining.

Both teams made changes as the game entered the last ten minutes. Cedric Itten replaced Ryan Kent and Pawlett was replaced by Our Academy Graduate Darren Watson.

As Rangers frantically looked for an equaliser, Jermain Defoe came on for Morelos eight minutes from time.