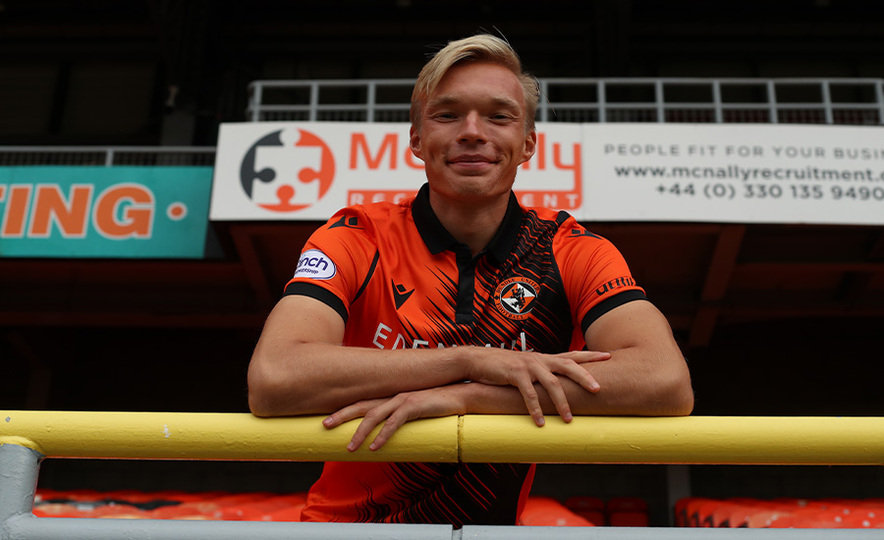 Following the completion of the work permit process, we are thrilled to confirm the Ilmari Niskanen has officially arrived at Tannadice from Bundesliga 2 club FC Ingolstadt 04.

'Immi' signed his United contract last month but was held back from his move to Scotland due to the latest protocols regarding work permits. The Club has worked tirelessly to complete the process at the earliest convenience and we can confirm the Finnish international is now available for team selection.

In an exclusive DUTV interview, Ilmari said: "I'm absolutely thrilled to be here and really looking forward to getting going. So far, everything I've seen and heard about the club has been brilliant.

"It was an easy decision to come to Dundee United. The club said they really wanted me and as a player, you always want to feel that. It's a great club with great traditions, I knew a bit of the history of the club but I'm looking forward to learning even more.

"I started playing football when I was five and ever since then I've dedicated my life to it. I love football, it's the most beautiful sport in the world and it means the world to me. I know my playing style fits here perfectly.

"I'm a powerful, fast, dynamic winger so I know if I put my full potential out then I can be a good player here. I want to help the team achieve the best position in the table as possible. We have a strong team at the moment so I know we can do really well this season.

"I watched the Rangers game on TV and even though it wasn't full capacity then, I could feel the fans cheering and it was brilliant. I can just imagine that when it is a full stadium it's going to be amazing. I'm can't wait to celebrate my goals in front of these great supporters. It's going to be brilliant."

The 23-year-old, who has been capped six times for his country scoring once, is a winger who can operate on both flanks.

Having played the majority of his career in his native Finland, Immi made 143 appearances for KuPS, scoring 13 goals and being named the Veikkausliiga Player of the Month in July 2020 having scored in every game that month.

He would make the move to Germany in September 2020 when he signed for FC Ingolstadt 04 in Bundesliga 2.

Ilmari will wear the number 7 shirt this season and is available for tomorrow's match away at St Mirren.