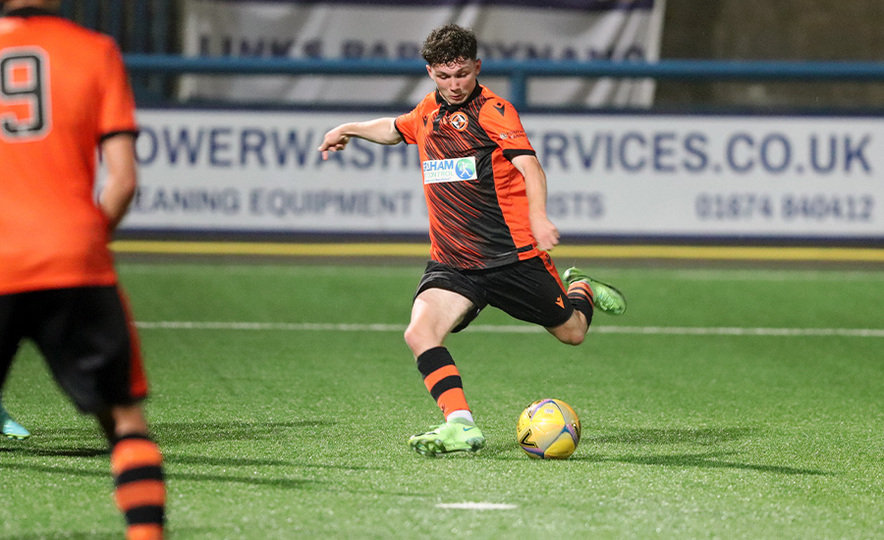 The Young Terrors hosted Motherwell under the Links Park floodlights in the driving rain as they looked to maintain their fabulous start to the 2021/22 CAS Under-18s Elite League, having won all three of their first games.

Ryan Moon made four changes to the XI that defeated the Hoops at the end of August, Jamie McCabe, Leyton Bisland, Kerr Smith and Fin Malcolm all dropping out to accommodate Ruiaridh Adams, Nairn Lowe, Stuart Heenan and Dom Naglik into the starting line-up.

United also began in a different shape to usual, perhaps due to the wholesale changes, with a 3-4-3 preferred to the 4-3-3 utilised in the games prior. Wingbacks Miller Thompson, usually an attacking midfielder, and Lowe dropped into the defence when out of possession to form a five back and offer added solidity in front of Adams between the sticks.

Heenan was the first man in tangerine to try his luck four minutes in after Naglik charged down the Motherwell defence. The ball broke to the winger just outside the area, but his ambitious half-volley failed to trouble the visitor’s keeper.

Motherwell hit back with a half-chance of their own soon after, their number six advancing beyond the United backline unmarked in the right channel and receiving a clipped pass from deep before slashing his shot narrowly wide of Adam’s right-hand post.

An exquisite touch by Heenan just inside the Steelmen’s half allowed time and space for Lowe to fire a teasing cross, low across the box but, unfortunately, there were no takers in a tangerine shirt.

United’s trademark high press almost created the opener just before the half-hour mark. Heenan, again at the heart of a positive attacking move, nicked the ball off the toes of the Motherwell number eight and found Naglik in the right half-space. The striker twisted his marker inside out and fired a low shot from an acute angle that forced the away side’s keeper into action for the first time.

After an uneventful first 40 minutes to the match, the Young Terrors made the breakthrough just three minutes before the interval. Craig Moore pickpocketed his fellow number eight 35-yards from goal and drove towards the heart of the Motherwell defence.

The midfielder rolled the ball left for Rory MacLeod who took a touch to steady himself before drilling the ball across the keeper into the bottom corner to continue his fine form, the 15-year-old with three G/A in as many games.

The infant stages of the second 45 saw United go close to bagging a second. Jacob Comerford’s marauding run gave him the opportunity to deliver to the back post for Bryan Mwangi, who intelligently teed up Naglik eight yards out. Naglik dug the ball out from under his feet to cannon a shot off the post, MacLeod’s rebound heroically blocked by a covering defender.

As the half progressed, Motherwell grew into the contest, enjoying more and more possession as they searched for an equaliser. However, the closest they came to drawing level was a weak effort from their number 17, who skipped away from Comerford and could only find the gloves of Adams with his shot from distance.

The 66th minute brought the crucial second United goal which killed the Steelmen’s morale and, ultimately, the game. A miscue from the centre-back allowed Heenan to knock the ball into the massive space behind the defence and latch on to his own pass thanks to his blistering pace.

The winger cut back onto his weaker left-foot, feigned to shoot twice and struck low into the near post via a slight deflection to double the Young Terror’s lead.

The game fizzled out after Heenan’s goal, as both sides began to settle for the result. United were happy to soak up the Motherwell pressure due to their fabulous organisation and spring forward when possession was regained.

The tangerine shirts burst into life six minutes from time in search of a third, MacLeod sliding the ball wide for Heenan who looked for MacLeod inside the area, his touch deserting him on this occasion as the visitor’s keeper raced out to smother the ball.

The last opportunity of this encounter came from a set-piece, O’Donnell left in splendid isolation on the penalty spot to head goalward, an easy save down the middle. The final whistle sounded soon after to conclude another productive 90 minutes of football for the Young Terrors, Ryan Moon’s honeymoon period continuing into September.

"It was a really tough night but in the end I think we deserved it," said Heenan. "We had to go with a new formation tonight, playing three at the back due to a number of key players missing. That was going to be hard because we'd never really done that before but I thought we responded well to it and to play the way we did was really good.

"It helped a lot getting the goal at the end of the first half because, to be honest, it could've gone either way. We knew a goal was coming but we just didn't know when so to go in front gave everyone a lift.

"With my goal I wasn't expecting the defender to make the mistake but you've always got to be ready and, thankfully, I was in the right position. I tried to take the shot as early as I could and it worked.

"I'm delighted to have two goals for the season already, both coming on my left foot! I've been working on finishing with my left foot in training so I'm glad to see it's paying off.

"We're sitting top of the league now after this great start we've had - we want to keep that going. Hopefully, I can add even more goals and some assists to help us do that."

Next up for the Young Terrors is an away trip to Aberdeen on Tuesday 14 September.