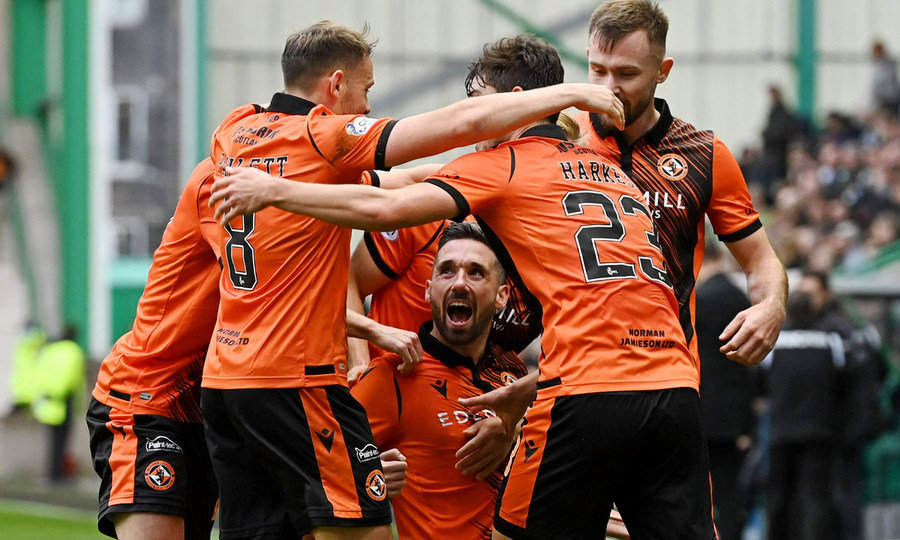 The Terrors returned to action after the international break with a tough test against a high-flying Hibernian at Easter Road.

United had the chance to overtake their opponents with a victory, the Edinburgh side sitting just one point ahead of Tam Courts’s men heading into the clash. The last meeting between the sides came only 23 days ago when United exited the Premier Sports Cup as the visitors claimed a 3-1 win at Tannadice, a score line which was a harsh reflection of how the contest unfolded.

There was a surprise inclusion in the starting 11 for Our Academy Graduate Declan Glass, who made his first start since 11th January 2020, when United demolished a lacklustre Partick Thistle 4-1 thanks in part to a Lawrence Shankland hat-trick. This was the only change made to the team that defeated Ross County, however new signing Maxime Biamou earned himself a place on the bench.

When in possession, United looked to spring forward through the attacking trio of Peter Pawlett, Nicky Clark and Ilmari Niskanen, but when possession turned over, Pawlett tucked into midfield to form a compact mid-block to frustrate the creativity of Jake Doyle-Hayes, Joe Newell, and former United man Scott Allan.

United made a confident start to the match, happy to dominate the ball and probe for a way through the Hibs midfield, however they almost got caught on the counter after eight minutes when Mulgrew misjudged a forward pass from the hosts which allowed Martin Boyle a chance to run at the isolated McMann. The full-back put in a fabulous challenge but the loose ball fell back to Boyle, and Hibs had a three on two scenario. Luckily for United, Boyle thundered his cross into Allan at the front post and the ball trundled harmlessly out for a goal-kick.

Niskanen was almost the beneficiary of a lapse in concentration from Hibs debutant Nathan Woods, as the Finn pickpocketed the defender just outside the box. Woods recovered well though to get the slightest of touches on the ball to prevent Niskanen from heading through one on one with Matt Macey.

The lively Niskanen involved himself in more action soon after, as a free-flowing team move involving Ryan Edwards, Nicky Clark, and Scott McMann culminated in the winger forcing Macey to tip his goal-bound effort round the post for a United corner.

A flurry of corners followed on the half-hour mark as United pressed for the opener, with Hibs resorting to any port in a storm of clearances to relieve the intense pressure upon them from all in tangerine.

A trademark mazy run from Pawlett was abruptly ended by a poor challenge from Doig just outside the area, the loose ball falling to Clark who struck a venomous effort narrowly over the bar with his left foot.

United’s dominance would eventually pay off as Nicky Clark deservedly found the net on the stroke of half time. A McMann throw-in eventually dropped to Pawlett and, after neat combination play with Harkes, he fed Clark. The striker took a touch to steady himself before bending a stunning effort into the far corner from 25 yards past the helpless Macey between the Hibernian sticks. A perfect way to end the first period for United.

The Terrors picked up from where they left off in the first half, harrying the Leith outfit all over the pitch, and got their just rewards seven minutes after the restart when Ryan Edwards doubled our lead. Glass picked up the scraps of a cleared corner and skipped away from Allan before pinging the ball to McMann on the left. McMann then delivered an inch-perfect cross onto the head of the centre-half who rose above Hibs skipper Paul Hanlon to thunder the ball into the top corner and spark raucous celebrations amongst the vocal traveling support.

Hibs looked to retaliate after being stunned by United’s sensational performance, with green shirts flooding the box as a barrage of constant deliveries were hurled into the box. United remained calm though, with the formidable partnership of Charlie Mulgrew and Edwards clearing all in their path. Edwards continued his heroics, this time at the other end as the six-foot five man glanced a well-struck Jamie Murphy effort, which was destined for the postage stamp, over the bar just in front of his Swiss colleague. Edwards thwarted Murphy again when he took the sting out of his angled strike, giving Siegrist an easy gather as the hosts and their fans began to realise it wasn’t to be their day.

Courts’s men wrapped up the three points by netting a third as the match entered the last 15 minutes, a second goal of the season for Kieran Freeman. A throw-in again the source, Clark and Pawlett executed a brilliantly timed one-two before releasing Niskanen into the area. He cut in past Woods and unselfishly squared to the unmarked Freeman on the penalty spot who lifted the ball over the despairing Macey, a sea of tangerine exploding into life once more as the full-back celebrated in front of them.

Siegrist continued to prove his worth to the team when he pulled off a miraculous stop to make sure his clean sheet remained intact, Doig’s cross running all the way through to Kevin Nisbet at the back post who shot from 12 yards, Siegrist springing to his right to paw the ball onto the woodwork. The United stopper was also forced to palm an ambitious Newell volley to safety as time ticked down.

Minimal injury time followed, and the referee’s whistle concluded a comprehensive victory much to the delight of the Arabs who created a fabulous, carnival atmosphere throughout. The three points and three goals see United leapfrog today’s opponents and secure a UEFA Europa League spot in third place for the time being.