MATCH REPORT : UNITED COME OUT ON TOP IN PULSATING CLASH WITH ABERDEEN 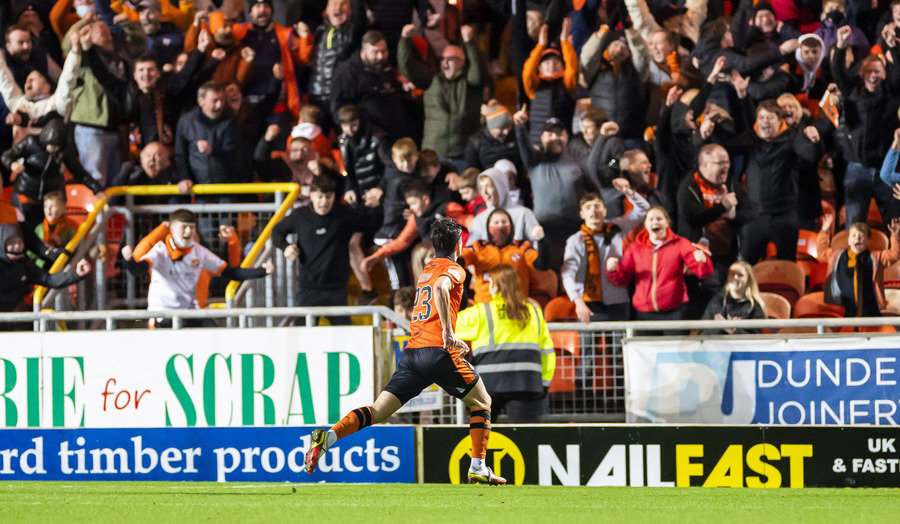 United returned to cinch Premiership duty after the international break with a tasty New-Firm derby at Tannadice. The Dons claimed the upper hand when the sides met on the opening day of the 2021/22 campaign, inflicting one of the four league defeats Tam Courts has suffered in 13 matches, a goal in either half in the Granite City securing a relatively comfortable three points for the hosts.

The gaffer made only one change to the starting 11 that were beaten at Tynecastle two weeks ago, Our Academy graduate Declan Glass’ exclusion from the line-up heralding the long-awaited return of Calum Butcher to the centre of midfield, Wales international Dylan Levitt still not fit enough for a place on the bench.

The Dons deployed a 4-3-3, like United, with the inverted forwards of Ryan Hedges and Marley Watkins staying tight to Ramirez to draw the hosts’ full-backs into central areas. This left voids of space in the wider regions for Dean Campbell and Jack Gurr to advance into, which left United’s wingers with the difficult decision of whether to stay deep or press high to squeeze the Dons back the way.

United could’ve opened the scoring inside 60 seconds when Pawlett found space to deliver from the corner of the box, the ball deflecting perfectly into the path of Jeando Fuchs and, but for a crucial intervention from MacKenzie, he would’ve found the net.

Both teams struggled to find a flow in the infant stages, United disrupting Aberdeen’s counter-attacks well through the tenacious midfield trio of Ian Harkes, Butcher and Fuchs, but failed to play their way through an increasing compact and crowded centre of the park, as possession frequently changed hands in a matter of seconds.

One of the many free-kicks awarded by Bobby Madden almost had the visitors in front, after McGeouch’s wide cross was only half cleared by the backpedalling Butcher. The loose ball dropped to Ramirez who killed it dead before attempting trivela which narrowly evaded Benji Siegrist’s far post.

The match then produced two great chances within a minute of each other on the half-hour mark. For the Dons, they stole possession off a tangerine shirt and broke forward in numbers. Hedges found Watkins, and his shot was well blocked by Ryan Edwards on the recovery, Gurr slashing the follow-up into the side-netting with power.

At the other end, Pawlett’s enthusiastic pressing forced MacKenzie into an error, with the ball running wide for the onrushing Kieran Freeman who caught flat-footed Campbell napping. The Our Academy graduate advanced into the area and sent his shot skimming past the post, much to the relief of Joe Lewis.

The atmosphere inside Tannadice reached boiling point just before the break. Funso-King Ojo flattened Butcher inside the Aberdeen half earning himself a caution, then Madden produced the same punishment to Hedges for booting the ball away after being caught offside. Barely a minute later, a tussle between Edwards and Ramirez culminated in the two players going head-to-head, then the Dons man hit the deck. The referee flashed a red card in the direction of Butcher in the aftermath and the midfielder headed for an early bath.

The drama didn’t stop there. The visitors were also reduced to ten men prior to half-time when Ojo was embroiled in an off-the-field incident. To end a drama filled first-half, Stephen Glass was given his marching orders for his passionate protests towards the officials.

Aberdeen began to dominate at the start of the second 45, but completely lost control when Courts made three subs in quick succession to change the shape. Ilmari Niskanen, Peter Pawlett and Fuchs departed, replaced by two Our Academy graduates – Louis Apperé and Declan Glass, as well as youngster Flo Hoti. This led to United creating numerical overloads in the centre to play one-touch quick passes, then look long for the physicality of Apperé who acted as a lone striker in front of Nicky Clark.

Siegrist was called into action after a quiet spell when Gurr’s cross dropped to Jenks behind the penalty spot, the Swiss unorthodoxly but effectively swatting away his strike.

Substitute Apperé, in particular, was the difference maker for the hosts, the 22-year-old harrying the defenders into alleyways to force turnovers and driving at the retreating dark blue shirts. Following a corner won by the striker, Edwards aerial presence allowed him to flick the ball into the six-yard box for Clark to send his acrobatic effort just over the stanchion, perhaps connecting with it too well.

Newcastle loanee Matty Longstaff found himself surrounded by three tangerine shirts and Apperé managed to pinch the ball from him to create a four versus three scenario. The striker decided to go solo, chopping inside Brown and shooting, with Lewis doing just enough to divert the ball onto the post.

However, from the resultant corner, the break-through would finally come for United. Scott McMann’s corner drifted through a ruck of players at the front post and bounced onto the right boot of Harkes, the ball sailing into the unguarded net as two sides of Tannadice erupted into ecstasy.

Aberdeen failed to move the ball quick enough to punish the occasional disorganisation in the home sides’ back-line, much to the frustration of their supporters, and time eventually ran out for the Reds, Siegrist barely having to make a save after United going in front.

The American’s third goal of the season was enough to see the three points remain in the city of Discovery and put United back up to joint-third in the cinch Premiership table.