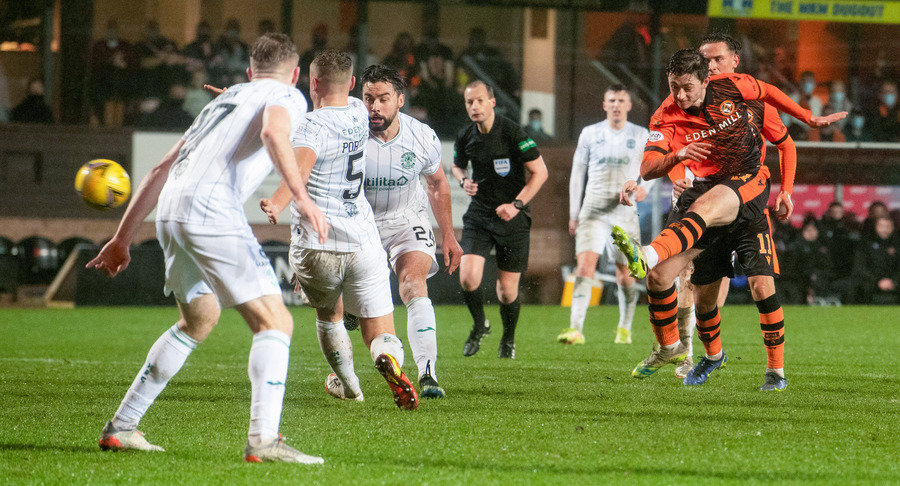 After the announcement that the cinch Premiership winter break would begin a week early due to the re-introduction of crowd restrictions, the visit of Hibernian to Tannadice would be United’s last fixture of 2021.

One of the Terrors’ best performance of the 2021/22 campaign came against today’s opponents, when goals from Nicky Clark, Ryan Edwards and Kieran Freeman saw United record a comfortable 3-0 victory at Easter Road.

Tam Courts made four changes to the side who, despite battling valiantly, were defeated at Ibrox as a couple of familiar faces returned from COVID-19 isolation. Ian Harkes, Benjamin Siegrist and Kieran Freeman reclaimed their starting spot from Livingston the week prior, as well as a first league start for Academy graduate Lewis Neilson in almost a year.

For the second week running, United utilised a five-back formation when out of possession with Sporle and Freeman playing as wingbacks rather than the fullback roles to which they are accustomed, giving both license to get forward when the ball was won back.

Inside the opening minute, Hibs forced a half-chance as Doig headed to the by-line and pulled the ball back for Kevin Nisbet, the Scotland international’s shot on the turn smothered by a ruck of tangerine shirts.

Soon after, Drey Wright struck a dipping effort just wide of the near post from 25-yards.

Hibs were happy to let the hosts stroke the ball around the defensive third but aggressively pressed as soon as United turned to face their own goal, harrying players into playing the ball back to Siegrist. United coped well with the masses of possession their counterparts had, keeping a disciplined shape to offer up no easy chances.

Two crucial interventions from both Charlie Mulgrew and Neilson prevented Martin Boyle and Josh Doig respectively with back post tap-ins as the Hibees continued to dominate.

Eventually, the visitors made the breakthrough in controversial fashion. Doig’s dinked cross drifted all the way to Chris Cadden at the back post who volleyed goalward. His strike was blocked by the well-placed Mulgrew, but the danger wasn’t over. Boyle was on hand to hit a well-struck effort beyond Siegrist, Nisbet touching the ball home from behind the keeper, sparking vociferous calls for offside amongst players and fans but to no avail despite Willie Collum’s correspondence with his assistant.

In the second half, and after a change of shape, United began to get a foothold in the match, with little action taking place in the home side’s defensive third.

Nicky Clark looked set to go one on one with Matt Macey five minutes after the restart after capitalising on a loose header from Lewis Stevenson, but was dragged down by Paul Hanlon, the Hibs Skipper receiving a caution for his troubles. Clark stepped up to take the free-kick just inside the D and forced a save from the keeper after rolling the ball under the wall towards the bottom corner.

Adrian Sporle tested Macey with 20 minutes to play after Harkes was denied by a fantastic recovery challenge by Stevenson, with the ball sitting up perfectly for the strike. The Argentine connected well with the half-volley but his effort was saved at the near-post, behind for another in a succession of United corners.

Substitute Logan Chalmers became the main source of danger in the closing stages, darting around the attacking third to spray the ball all over the park, and then dummying the challenge of Josh Campbell and firing a shot into the side netting.

Just as United looked to be on the ascendancy, Hibs struck a killer blow. A defence-splitting pass from Jake Doyle-Hayes found Boyle in behind the defence who cut beyond the despairing challenge of Scott McMann. Cadden arrived on the scene to take control and calmly stroke the ball under the advancing Siegrist.

As the clock ticked onto the 90th minute, Declan Glass gave his side a lifeline in spectacular fashion. The Academy graduate picked up the ball 30 yards from goal on the right of the pitch and danced beyond the challenge of numerous Hibs players. Glass then headed into the box and planted the ball into the top corner with his left foot.

However, the hope was short-lived though, as Jamie Murphy cut in from the left, played a one-two with his teammate, and rolled the ball beyond the keeper from the top of the box.

A much better performance in the second 45 from Courts’ depleted United side, who will be thankful for the arrival of the winter break, allowing for a chance to re-charge and reset before St Mirren come to Tannadice.