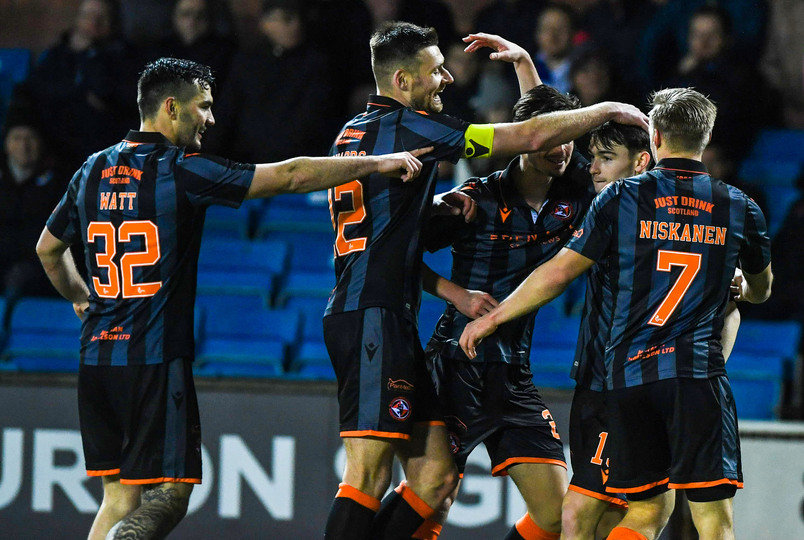 United headed to Ayrshire to kick off their Scottish Cup campaign for the 2021/22 season, faced with a revitalised Kilmarnock side under the guise of Derek McInnes. Last season, the Terrors reached the semi-final of the competition after defeating Partick Thistle, Forfar and Aberdeen on the route to Hampden, eventually being undone by Hibernian.

Tam Courts made five changes to the side beaten by St Mirren in midweek, with Tony Watt making his first start since making the switch from Fir Park and Calum Butcher returning from suspension after receiving a retrospective ban for a challenge on David Turnbull.

United began the match on the front foot and took the lead inside three minutes. Scott McMann lofted a speculative ball in behind the high Kilmarnock line which Marc McNulty latched onto. The striker outpaced Ash Taylor and headed through one-on-one with Zach Hemming and kept his cool to prod the ball home off the post, notching his first goal of the season.

It took Killie until the 10th minute to respond, Taylor meeting Rory McKenzie’s corner and forcing Siegrist into a relatively comfortable save.

Watt’s first involvement saw him slip a defence-splitting pass into the area for the advancing Kieran Freeman, but the Academy graduate’s left-footed shot was smothered by the feet of Hemming.

Against the run of play, the Championship side restored parity after 20 minutes. United failed to press Brandon Haunstrup and he had time to clip a pass onto the head of Blair Alston in the left channel. Alston glanced the ball into the box for Mckenzie who struck his initial effort straight at Benji Siegrist but the rebound fell back to him and he calmly stroked into the unguarded net.

Kilmarnock gained the upper hand following their goal, with United second best for the remainder of the half as their opponents flooded bodies forward as they looked to go ahead, finding joy in the wider regions particularly.

Euan Murray tested Siegrist after a flick-on from Oli Shaw, then the former Hibs man spurned a glorious opportunity to take the lead. A lapse in concentration from the United defence saw the ball drift beyond McMann for Shaw, however, luckily for United, he dragged a weak effort wide of the post.

United’s only half-chance heading towards the interval came courtesy of Butcher’s tenacity, winning the ball back from Alston before feeding Watt, his cross towards the unmarked McNulty cut out by Chris Stokes.

The second half began incredibly slowly, aside from McKenzie picking out Shaw in the middle who failed to trouble the keeper with a close-range header, and most of the game unfolded in the Kilmarnock half as United unsuccessfully probed for a way through the compact midfield and backline.

Taylor proved a threat from a set-piece once again, meeting Haunstrup’s cross and beating Siegrist with the header, only kept out by the well-placed Freeman on the line.
Kilmarnock continued to look more likely to go in front in the closing stages, Alston trying his luck from distance with Siegrist making an unorthodox save onto the post following a well-struck effort from McKenzie from the edge of the box.

With five minutes to play and extra-time looming, United almost snatched it. Watt flicked the ball into the box for Niskanen who in turn found Peter Pawlett. The midfielder returned it to Niskanen with a backheel, before striking the post with a low, skimming effort.

This proved to be the last action of note in normal time, and the match continued for another 30 minutes.

Pawlett and Freeman combined effectively down the right at the beginning of extra-time to allow the latter time and space to drill the ball across the area for Watt, the new boy smashing over the bar from 12 yards.

Ian Harkes then fed Watt on the right of the box merely 60 seconds later, again the striker failing to find the net as Hemming got down low to deny him.

At the other end, Kilmarnock broke with a numerical advantage, McKenzie eventually slipping the ball to substitute Kyle Lafferty who shot straight down the throat of Siegrist on the angle.

Five minutes into the second half of extra-time, the breakthrough finally came for United. Watt poked the ball a few yards into Dylan Levitt, with the Welsh international skipping beyond a challenge with his fabulous first touch. Levitt danced into the area and sat down a despairing defender with an exquisite ball roll before burying into the corner with his left foot, sending the Tangerine Army into raptures behind Hemming’s goal.

Instantly after the restart of play, United almost conceded as they were caught napping at the back. McKenzie fired beyond Siegrist, Ryan Edwards on hand to heroically clear off the line, then Harkes did the same with Shaw’s follow-up effort. The danger still wasn’t clear, but Murray wastefully blasted into the side-netting under pressure from Pawlett.

Kilmarnock failed to put the black and grey shirts under any substantial pressure despite being behind with just minutes to play, and the visitors managed the game exceptionally well to surrender no chances for their opponents to hit a late leveller.

A tough tie traversed by a street-wise United who put their name into the hat for the Fifth Round, ending their run of six straight defeats.