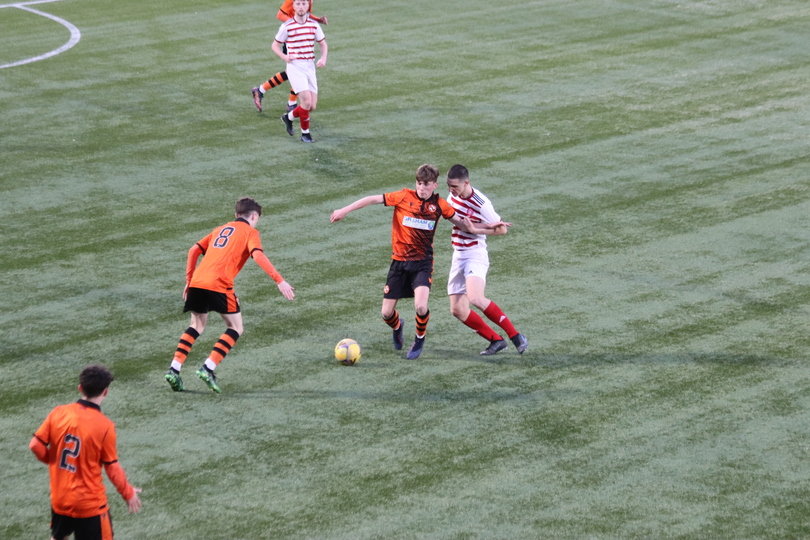 The Young Terrors were looking to bounce back quickly from a heavy defeat at the hands of Hibernian on Tuesday, as they headed to Lanarkshire to take on Hamilton Accies who sat directly below them in the CAS Under-18s Elite League table.

A late Rory MacLeod lob earned United a point last time the sides met, as Ryan Moon’s side staged an inspired second half comeback from two goals down at the break.

MacLeod was one of three changes made to the side, alongside fellow 2006s Keir Bertie, Alan Domeracki and Sean Borland, whilst 2007-born Ollie Simpson was named amongst the substitutes in a youthful Young Terrors side once more. United altered their shape slightly due to the absence of regulars Craig Moore and Lewis O’Donnell in midfield, Keir Bertie and Sean Borland behind Domeracki in a three-man midfield, flanked by wingbacks of Sam Lovie and Stuart Heenan.

The match started slowly as both teams looked to settle into their respective styles of play. The Young Terror’s attacking outlet consisted of Dom Naglik who looked to drop deep and collect longer passes that bypassed the midfield, then attempting to bring teammates Domeracki and MacLeod into play who positioned themselves close to the striker.

Hamilton’s main threat came from the wide areas, with United’s three at the back setup leaving them slightly vulnerable to attacking runs behind the wing-backs. Christopher McGinn and Luke Meikle found themselves latching onto passes, usually from defensive midfielder Lewis Latona, in these positions but failed to pick out their advancing colleagues due to a lack of composure when crossing.

The first effort on target for either side came after 28 minutes after a foul on Latona just outside the box. Adam McGowan looked to wrong-foot Jamie McCabe with his looping effort but could only find the roof of the net.

Hamilton were now beginning to look more likely as the match headed for the break and took a deserved lead on 35 minutes. The United defence stepped out attempting to play lone striker Sam Nicolson offside but mistimed their advance, allowing the Accies forward to stride towards goal. Jacob Comerford recovered remarkably well to show his opponent wide and force a sub-standard shot which was saved easily by the feet of McCabe. However, McGowan was on hand to collect the rebound and took a touch past Heenan before being felled by the diminutive winger, and stepped up to convert the spot-kick low into the bottom corner.

Hamilton continued to turn up the heat, with a Greg Petrie intervention on the goal-line from Meikle’s bouncing half-volley the only thing keeping the hosts from doubling their advantage in quick succession.

United survived a flurry of corners just before the break as an uneventful first-half concluded.

The game continued in the same turgid fashion after the restart, but Hamilton remained in control as they dominated the physically and numerically inferior United midfield. Keir Bertie often found himself surrounded with a lack of progressive options, and on one occasion this almost led to the second for the home side. Meikle pinched the ball from between his legs and spread the ball wide for his opposite winger McGowan who cut in and fired a right-footed effort narrowly past the post with McCabe rooted to the spot.

With tangerine sightings of goal few and far between an equaliser looked unlikely, however, on 71 minutes Ryan Moon’s side drew level. MacLeod stood over a free-kick 30 yards from goal and rather than having a shot, he intelligently clipped the ball into the corridor of uncertainty for Comerford who stooped to guide the cross into the corner past the keeper.
Unfortunately, the joy was short-lived for the Young Terrors. From kick-off, Hamilton broke down the left and Christopher McGinn’s cross dropped to Patrick Meechan, and his first-time effort took a cruel deflection off a United shirt, bamboozling McCabe and trundling into the corner to restore his side’s lead.

Chances were flowing now but were flowing towards the visitors’ goal as time ran out. Nifty footwork from Jared Lyons drew the United midfield towards him, opening space for goalscorer Meechan who received and whipped a shot towards the far corner, with McCabe producing an outstanding, one-handed save to palm the ball onto the top of the crossbar. From the resultant corner, Meechan again went close, diverting McGowan’s delivery just wide of the upright.

The U18s best chance to take a point back up to Dundee came in the 87th minute after a one-two between Lovie and MacLeod gave the former a chance to pick out Heenan in the middle, but the cross was slightly behind the United forward and his backpedalling header looped onto the roof of the target.

In the dying seconds, Aaron Preston was dismissed for denial of a goalscoring opportunity, cynically dragging Heenan to the floor as he raced through on goal following a misjudged defensive header. MacLeod stood over the 22-yard free-kick but thundered it into the wall and the referee’s whistle sounded soon after.

A poor, tetchy spectacle overall with Hamilton claiming a deserved three points as they managed to capitalise on two of the multitude of chances they managed to create. The Young Terrors now head up the A90 to take on Aberdeen at Cormack Park this Tuesday.