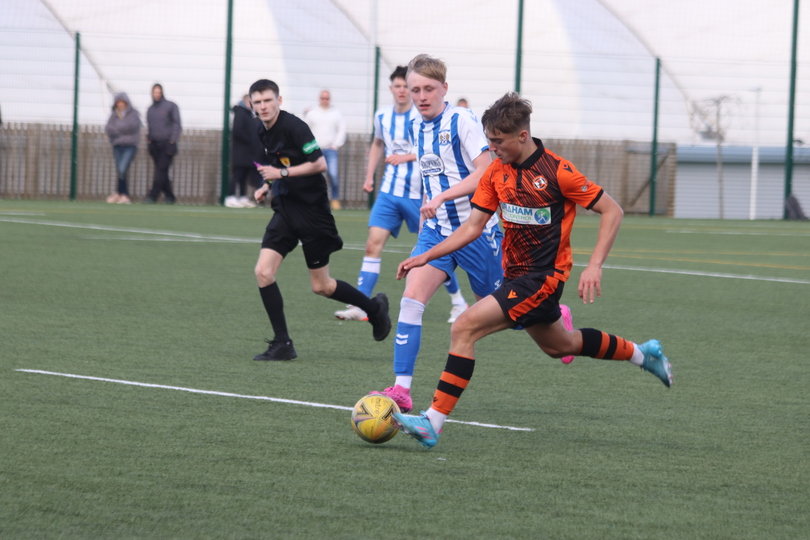 After a confidence-boosting victory in the New Firm Derby on Tuesday, the Young Terrors were back in action at the RPC once again as they faced Craig Clark’s Kilmarnock.

The sides last met in Ayrshire on a cold Friday night at the beginning of February, a Miller Thomson solo effort not enough for the three points as the hosts ran out 3-1 victors.

Goalkeeper Jamie McCabe returned between the sticks as Ruiaridh Adams prepares to play for Hutchison Vale tomorrow as one of three changes to the United XI which defeated the Dons, alongside 2007-born right-back Owen Emslie, making his first Young Terrors start, and Adam Carnwath taking the place of Layton Bisland and Reece Kerrigan respectively.

Killie’s physical superiority over a youthful United side was clear from the off, as they looked to exploit the mismatch in height between Bobby Wales and Arron Donald by sending constant long balls towards the pair. Aaron Brown also looked to stay close to his strike partner to pick up on the multitude of second balls the match churned out.

On three minutes the visitors went agonisingly close to taking an early lead through Charlie McArthur as he rose to meet Joe Spencer’s free-kick, sending his headed effort inches wide of the post from eight yards.

Another set-piece almost proved fruitful for Clark’s men, this time Spencer receiving on the edge of the area after a short corner and screwing his shot into the turf, a deflection en route to goal seeing the ball spin up awkwardly onto the roof of the net.

The warning signs had been apparent but not heeded by the Young Terrors, and they slipped behind after just 13 minutes. Brown found room in the right half-space to float a pinpoint cross onto the head of Wales at the back stick who overpowered Donald and crashed the ball into the near post.

However, less than 100 seconds later, Ryan Moon’s side restored parity from the spot. Dom Naglkik felt contact in the box and hit the deck following powerful running from Stuart Heenan down the right which culminated in him pulling it back to his colleague, and Rory MacLeod whipped the ball into the bottom right corner to notch his fourth goal in two games.

With 21 minutes on the clock though, the Ayrshire side regained their advantage. Kian Leslie rolled a short corner to Jon Craig and his wicked cross went unchallenged by the United defence, allowing Wales to bullet the ball into the top corner with ease from six yards.

Sam Lovie was almost made to pay for failing to recognise the dangers of straying out of defence poses, as he found himself pickpocketed by Wales 30 yards from goal. The striker strode forward and rolled the ball right for Watson whose angled strike was saved expertly by the alert McCabe’s feet.

Once again Kilmarnock almost put the ball in the back of the net from a cross, this time McArthur forcing McCabe into a fine save onto the post after he connected with Leslie’s looping delivery to the back post.

United eventually managed to fashion an opportunity from open play, as Craig Moore sent an early ball towards Heenan which was just too high for the diminutive winger to divert on target with his head.

A double chance for the away side followed as the game approached the break. First, Nathan Smith stooped to divert a Brown cross wide then Spencer powered his way to the by-line past the tangerine rear-guard and tested the keeper with a fierce low drive.

After the interval, it didn’t take long for heroics from Donald to prevent Killie from extending their lead, the centre-half making a last-ditch block to deny Leslie in the area after being found by the dangerman Wales.

New signing Adam Carnwath had impressed with his tenacity throughout, and with 49 minutes down, he equalised for United. An exquisite clipped pass into the channel from Lewis O’Donnell was controlled on the left foot of the Young Terror’s number 11, and he advanced into the penalty box before rifling the ball into the top corner.

Just as it looked as if the hosts would kick on and claim the upper hand in the match, Kilmarnock went in front once again, this time Leslie the architect. Craig burst out from right-back and found his teammate in a pocket of space on the left who threaded a perfectly-weighted ball in between the two United centre-halfs for Wales. The number nine rounded McCabe with his first touch and calmly slotted into an unguarded net.

The desire to attack from the visitors completely fizzled out after the goal, and their resolute style of play saw them drop deeper to allow their opponents to dominate the ball entirely. United looked to work the ball from in to out to open up spaces in the wider regions, but Kilmarnock’s well-drilled low-block proved difficult to break down. A blocked MacLeod shot from the right of the area was perhaps as close as Moon’s men got in a frustrating afternoon against a compact side.

A rare chance for the Rugby Park outfit came just after the hour mark, Lovie beaten in a 50/50 by Craig who picked out Brown on the gallop from deep and his thundering effort flew miles over the bar when any strike on target from so close would’ve surely hit the net.

In stoppage time, Wales crashed the ball into the side-netting after picking up Watson’s powerful header from midfield before completing his hat-trick in slightly fortunate fashion. The frontman wriggled away from multiple half-hearted challenges from the United defence and his dipping shot, which took a significant deflection, cracked off the bar and over the line.

The final whistle sounded instantly after the restart to conclude a frustrating afternoon for United who threw everything at Kilmarnock but failed to compete with the physicality they faced.