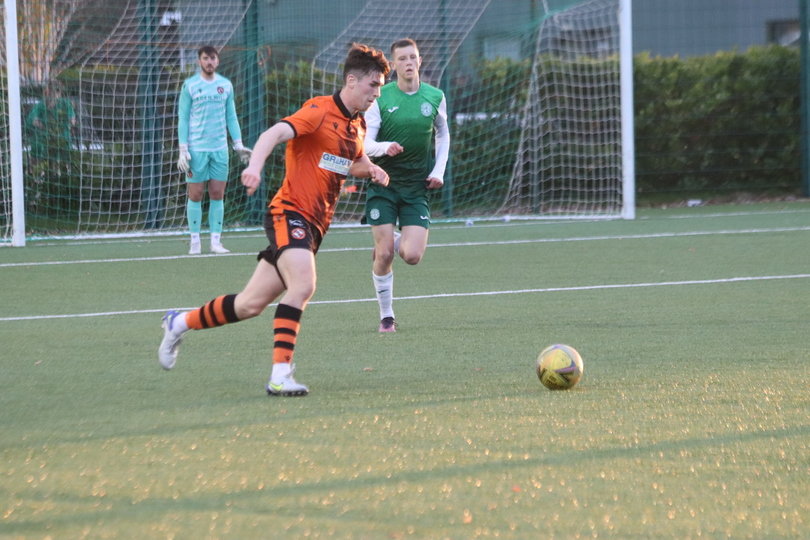 For the second time in a week, the Young Terrors made the journey down the M90 to Edinburgh as they visited the Hibernian Training Centre for a CAS Under-18s Elite League clash against the green half of the city.

Just three weeks had elapsed since United and Hibs had faced each other at the RPC, the Edinburgh outfit taking the spoils in a one-sided first meeting of the season.

Five changes were made to the XI which tasted defeat at Oriam last Tuesday, the return of first-team debutant Miller Thomson the headline alteration as he slotted into right-back. Elsewhere, Craig Moore reclaimed his starting spot in midfield alongside Keir Bertie, and both Ruiaridh Adams and Adam Carnwath also earned their space in the line-up.

United reverted to the tried and tested 4-3-3 which brought success in the early part of the campaign, as Bertie anchored the midfield behind Moore and Lewis O’Donnell, the latter pushed forward into more creative duties than his usual number six role. Up front, Carnwath and Stuart Heenan flanked Young Terrors top scorer Rory MacLeod.

It took just eight minutes for the deadlock to be broken in Tranent, and it was to be broken by the Young Terrors. A clipped ball from Bertie into the right channel was plucked out of the sky by Thomson on the burst from defence, and his first cushioned first touch brought him inside Oscar MacIntyre. The 17-year-old then had the presence of mind to pick out MacLeod standing unmarked on the edge of the area, and the forward spun sharply before striking the ball back across goal and finding the bottom corner to claim his sixth goal in his last four matches.

Bertie, who looked to receive from deep, was almost caught out after 16 minutes as his attempted forward pass was intercepted by Malek Zaid, his initial shot just inside the box blocked by Arron Donald on the recovery and the follow up effort from George Young slipped narrowly wide of the upright.

Both teams looked to compact the middle of the park by utilising narrow blocks which offered little space between the lines for respective number tens O’Donnell and Zaid to operate in, leading to searching balls into the wider regions being a regular occurrence. The first ball was usually one by the defending team, but the battle for seconds was crucial in chance creation.

MacIntyre’s switch on the half-hour mark almost proved the source of the equaliser for the hosts, as he found Young on the opposite wing. The attacked controlled on the run to race past Sam Lovie at left-back, and then managed to jink his way beyond Moore on the by-line before having his shot from eight yards saved by the feet of Adams in the United net.

An almost identical sequence of play followed, but this time Young found himself thwarted by Donald before he could get his strike away.

On 37 minutes, Hibernian would equalise under dubious circumstances. After two blatant fouls on both Thomson and Moore in the United box by pressing green shirts, MacIntyre picked up a loose ball and looked to dart between Comerford and Thomson, then hit the deck after little contact from either United man. However, the referee pointed straight to the spot and Young dispatched powerfully into the top left corner to level the arrears.

Soon after, a wicked Jacob Blaney free-kick from the corner of the box was tipped over the bar acrobatically by Adams.

One more opportunity followed in the opening 45, and it fell the way of United. A sweeping move down the left-hand side culminated in MacLeod delivering low across the area for Heenan and his first-time effort from close-range was smothered by the advancing Murray Johnson.

The Young Terrors continued to threaten after the interval, as an outstanding, cross-field ball from Moore was touched down by Carnwath for MacLeod running from deep, the striker’s goal bound shot with the outside of his boot blocked by Blaney on the penalty spot.

With 63 minutes on the clock, Ryan Moon’s side were on the end of yet another poor refereeing decision, as Lovie was wrongfully dismissed for punching the ball in the direction of a Hibs throw-in. This proved fatal, as less than 60 seconds later, Hibs took the lead. O’Donnell tried to find makeshift left-back Bertie just outside his own box, but inadvertently gave it straight to Young. The 17-year-old proceeded to play a perfectly weighted pass into the feet of Zaid who kept his composure to stroke the ball over Adams from 12 yards.

The game then descended into a tetchy, physical battle, with multiple booking for both sides as United and Hibs looked to deploy a Route One style of football in the closing stages.

Ethan Laidlaw looked certain to add a third for the hosts after outpacing Comerford and bearing down on goal, but Donald once again was on hand to nick the ball away from the striker’s toes at the last second.

Murray Aitken was the recipient of the game’s last chance after an error from Adams saw him thump the ball straight into Young’s feet, the Hibs man racing into the penalty area and backheeling for Aitken making the run off his back. His well-struck effort looked to be heading on target, but O’Donnell heroically threw himself in front of the ball and deflected it to safety.

A battling performance from a ten-man Young Terrors side who competed throughout with their older and more physical opponents, eventually undone by a combination of poor refereeing and an unfortunate mistake. United once again face Heart of Midlothian this Friday as the CAS Under-18s run-in continues at the RPC