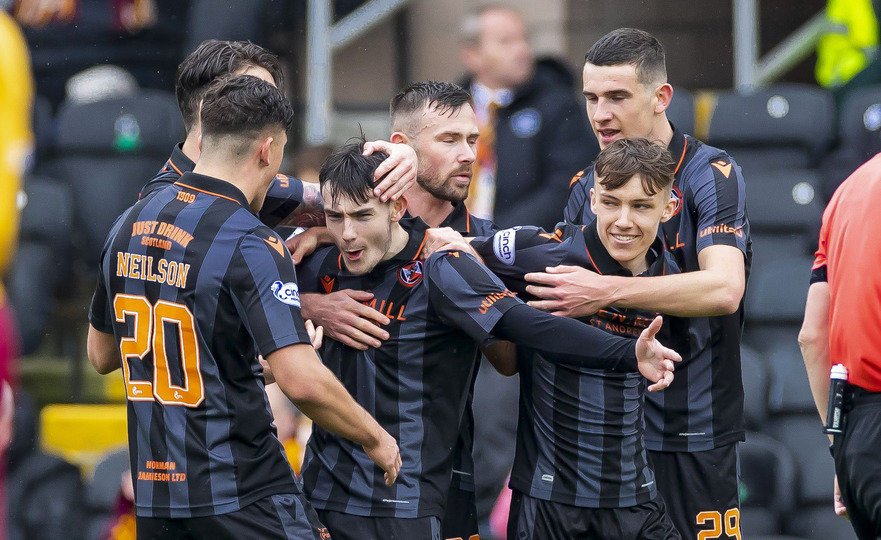 United were the hosts for a third consecutive cinch Premiership match, this time sixth-placed Motherwell, also in the hunt for a European place, the visitors.

Charlie Mulgrew stepped into defensive midfield as Tam Courts searched for the defensive solidity that had been lost from his squad, the 36-year-old screening the back three to offer extra protection. Aside from the tactical tweak, the Gaffer also altered the personnel as Nicky Clark and Chris Mochrie dropped to the bench to accommodate the inclusion of Academy graduate Archie Meekison and striker Marc McNulty.

Both Motherwell and United deployed similar 3-4-1-2 systems, utilising creative midfielders in the hole in an attempt to break the lines directly from defence. Meekison looked to shuffle from side to side in the half-spaces to receive on the turn whilst Ross Tierney took up more of a false nine role, dropping away from central defender Ryan Edwards into pockets of space behind Mulgrew.

A massive chance for Motherwell fell the way of Ross Tierney after eight minutes after a clearance from Liam Kelly was misjudged by Liam Smith on the wet Tannadice surface. The diminutive Irishman raced through one-on-one with Benji Siegrist, steadied himself and then cracked the inside of the post with a curling effort from 15 yards.

The visitors rattled the woodwork again just 11 minutes later. Meekison’s backward header was picked up by Callum Slattery who skipped beyond Edwards before being scythed down by the United captain, referee Kevin Clancy happy enough to allow play to continue as the ball rolled to the feet of Kaiyne Woolery just inside the area. The ‘Well winger took a touch out of his feet before thundering a venomous effort off the underside of Siegrist’s crossbar.

United’s first sniff of goal came at the midway point of the first half, Watt’s short corner to Scott McMann opening space for Meekison who received 25 yards from goal and sent a right-footed strike trundling the wrong side of Kelly’s post.

Motherwell continued to threaten, United almost architects of their own downfall with another backwards header, this time Lewis Neilson the culprit as he inadvertently sent Woolery one-on-one with Siegrist. Luckily, the Swiss was alert to race from his line and sweep the ball away from danger. The lively Tierney then struck wide after dancing beyond two midfield challenges just 60 seconds later.

Just as he did against Hearts last Sunday, Levitt stepped forward to give the Terrors the advantage as the match headed for the interval. A ball into the feet of Meekison allowed him to pull off a brilliant first-time flick to unlock the ‘Well defence, taking two defenders out of the game to find Levitt in a tight pocket of space. The Welshman drove across the box and played a sharp one-two with Watt, proceeding to send a deflected effort spinning over Kelly from the penalty spot, his second goal against the Lanarkshire outfit in as many games.

United went for the jugular after the break, in search of the goal which would kill off their opponents. Watt jinked beyond the challenge of Bevis Mugabi effortlessly into the box, only to be thwarted by a sliding block from Juhani Ojala.

At the other end, Siegrist once again had to stray into unfamiliar territory to clear a short back-pass, the ball landing to Slattery who in turn found Tierney, the 21-year-old’s eventual dinked attempt failing to trouble the Terrors’ stopper.

Yellow cards began to rain down as sliding tackles went wrong on the slippy surface, with Sean Goss and Mulgrew booked in quick succession as the match began to come firmly under United control.

On 68 minutes, McMann pickpocketed Mark O’Hara following a loose touch from the right-back and burst forward to create a three-on-two scenario. The United man had Watt to his left and McNulty to his right but opted to send a weak strike into the gloves of Kelly from range.

Substitute Joe Efford tried his luck from more than 30 yards and the shot had to be dealt with cautiously by Siegrist who palmed it behind for a corner.

The Steelmen threw Mugabi up top in a desperate attempt to offer something different for the United defence to deal with, however the Ugandan found himself marshalled out of the game by Ross Graham.

Two headers almost proved the source of a ‘Well equaliser in the closing ten minutes, first Ricky Lamie sending a powerful effort from a Slattery cross inches wide of the near post then Tierney’s attempt was acrobatically beaten to safety by Siegrist.

Academy graduate Graham was the recipient of the final chance of the 90 after Levitt escaped from the corner to tee his teammate up for a strike, the ball skidding towards the target and looking as though it was to deceive Kelly but the Scotland international reacted quickly to paw it from the line.

A nervy five minutes of injury time followed but the away side failed to fashion a clear-cut chance and the Terrors claimed a valuable three points in the hunt for European football.