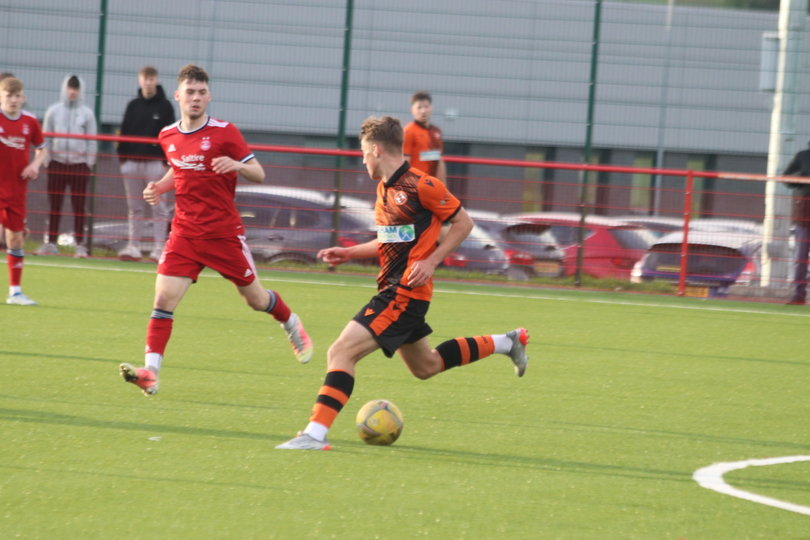 Sitting just one point behind their opponents in the CAS Under-18s Elite League, the Young Terrors headed up the A90 for a New-Firm Derby at Cormack Park.

United came out on top against the Dons in April, 3-1 the final score as top scorer Rory MacLeod bagged himself a hat-trick at the RPC.

After conceding late to draw with Hamilton Accies on Tuesday, Ryan Moon made two changes to the side. Scotland U17 internationalists Craig Moore and MacLeod re-claimed their starting spots with Josh Swain and Reece Kerrigan making way for the pair.

A 4-4-2 was utilised by Head Coach Moon to offer extra midfield support whilst out of possession whilst a fluid 4-3-3 was formed when the Young Terrors regained the ball. Striker MacLeod was given a free role to roam the park looking for space, the 16-year-old often dropping back to create from deep. Lewis O’Donnell, usually deployed in the number six role, was pushed further up the pitch to support Stuart Heenan, often looking to run beyond the Aberdeen backline from midfield.

The hosts’ press from the front caused major disruption to United’s style from the off as they looked to cut all passing lanes into the defenders when goalkeeper McCabe was in possession.

A fabulous interception by Jacob Comerford was all that prevented Barry Robson’s side from taking an early lead, Adam Emslie escaping the clutches of Keir Bertie down the right and looking for imposing number nine Liam Harvey standing unmarked on the penalty spot. The United centre-half positioned himself perfectly to throw a leg out to block the cross though.

On 21 minutes Moore looked to have set Heenan free as he raced towards the box but a lung-bursting recovery run from Kai Watson saw the winger pushed wide and his shot was smothered.

Adam Carnwath’s raking cross-field pass then picked out Bertie on the opposite side of the pitch who cushioned it back to Moore 25 yards from goal. The midfielder lined up a strike but his effort failed to trouble Tom Ritchie between the sticks for Aberdeen

After a cagey start, it was to be the Dons who drew first blood with 26 minutes gone. Dylan Lobban picked up the ball in a pocket of space just inside his own half and clipped an inch-perfect pass over the retreating United defence for Ryan Duncan to finish first time, the striker drilling home off the post 20 yards out.

A half-chance for United was fashioned after tidy combination play from Layton Bisland and Miller Thomson on the right as they worked the ball nicely around Evan Towler but Bisland’s teasing cross had no takers in the middle.

On the stroke of half-time things went from bad to worse for Moon’s men as the hosts doubled their tally. The Route-One style employed by Aberdeen the source, Duncan latched onto a bouncing ball and thumped a half-volley into the chest of McCabe, the rebound falling kindly for Harvey who placed it into the empty net.
After the break, Emslie warmed the gloves of McCabe after shifting inside Bisland and going for the far corner, the 16-year-old United stopper forced into an acrobatic save.

An almost identical strike from the opposite side then flew towards the bottom corner, this time Lobban pulling the trigger with McCabe doing well to parry the bouncing ball around his right post.

With an hour down and Aberdeen would wrap up the three points as Duncan claimed his second in frustrating circumstances for the Young Terrors. Harvey and Duncan again combining, the former drilling the ball across the area to his unmarked teammate to slam into the roof of the net from nine yards.

United finally tested Ritchie as Moore looked to pick out the bottom corner from range but was denied by a diving save from the 19-year-old keeper.

The introduction of Sam Lovie at left-back offered United an attacking outlet out wide as they often looked to find him running from deep, however he was left with little to aim for in the middle with MacLeod taking up a deeper role and Heenan lacking an aerial threat.

An unlikely source would give United a glimmer of hope with 20 to play as Arron Donald popped up at the back post to force O’Donnell’s outside-of-the-boot cross over the line with the home side stood still claiming for offside.

The Young Terrors dominated the ball in the latter stages as they began to deal with the long kicks from Ritchie well but failed to carve open a well-drilled and compact Aberdeen defence.

A disappointing defeat for United who gave themselves too large a mountain to scale after falling three goals behind. They now round off the season with a tricky double-header against Hibernian who almost have the CAS Under-18s Elite League title wrapped up as they sit a point clear of Rangers with four games in hand.