United are victorious at the Kilmac Stadium at Dens Park with a 2-0 victory over neighbours Dundee with goals coming from Clark and Shankland.

A packed Dens Park saw both teams set off at a frantic pace with plenty of tackles and free-kicks in the opening exchanges. An early booking inside two minutes for United’s Butcher set the tone for the early stages of the game.

The home side started brightly with McDaid down the left causing plenty of trouble for United. The midfielder had the first chance of the game but his cross flew by Siegrist’s post.

The frantic pace continued for the first 10 minutes with little composure from either side. The tension in the build-up to the game clearly carried onto the pitch.

Appéré and McMullan were the early pace setters for United but couldn’t make a way through the dogged Dundee defence.

In the 13th minute, United’s first chance came when a foul on Clark by Mackie gave the away side a free-kick 20 yards from goal. Clark’s effort was on target but couldn’t find its way past the scramble of defenders.

United had the bulk of the possession in the opening 20 minutes compared to Dundee but showed little in the way of clear-cut chances.

The Dark Blues began to create more openings after 25 minutes as both Dorrans and McDaid came more into the game. The first corner of the game went to Dundee, courtesy of McDaid, but the resultant set piece was easily cleared by United.

With so much at stake in the game it was a case of neither side settling to produce any real quality in the match. A win for either side could be the difference between a three or a nine point gap. Plenty to play for, and no side were prepared to give an inch. Whilst the forward lines of both sides were seeing little opportunity, the defences were giving little away.

McMullan continued to impress down United’s right wing, and the tricky winger’s run and cross in the 35th minute was unlucky not to be met by Shankland. Dundee had clearly singled out McMullan as United’s main threat, with both Mackie and McDaid doubling up to thwart the United winger.

Neither side were looking comfortable on the ball and possession was being continually passed back between the two sides. Plenty of aggression but little quality from either team.

As the first-half came to a close, the biggest statistic was the five bookings shown by referee Steven McLean. Little in the way of actual chances but plenty of hustle and bustle by both sets of players. 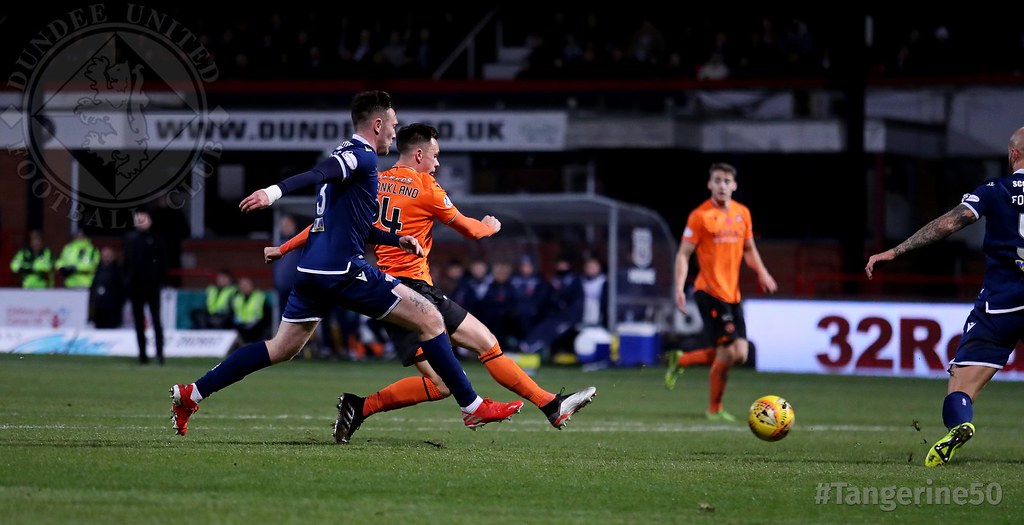 No changes from either side as the second half kicked off. Both sides came out more positively and had chances within the first 5 minutes of the re-start. A free-kick to United in the 50th minute from Clark was just headed over by Butcher.

In the 55th minute, United had the best chance so far of the game. Nicky Clark found himself through on goal. As he attempted to pull the trigger Dorrans perfectly timed tackle prevented Clark’s chance. Shouts of a penalty from the large band of travelling Arabs waved away by referee McLean.

Just one minute later, and United did have a penalty. Smith was brought down in the right side of the box by McDaid and the referee pointed to the spot. Clark stepped up and drilled home his third goal of the season past the flying Hazard in the Dundee goal. First blood to United.

The United fans didn’t have to wait long for the second goal to come. Shankland used his physical strength to control the ball from Nelson and then wriggling away from Byrne and Kerr. Racing into the left side of the box the deadly striker fired past the on-loan Celtic keeper Hazard to make it 2-0 United.

The first goal had forced Dundee into opening up in their search for an equaliser and as so often happens it was that tactical change that allowed United to grab the second.

The Arabs broke out into a chorus of ‘We’ve got Lawrence Shankland’ for the 19th time this season. That’s 20 goals in 20 games including his Scotland goal against San Marino. A phenomenal record for the season so far.

The second goal deflated Dundee and the introduction of Stanton shortly afterwards to shore up the midfield really killed the game off. With the home side now playing uphill on the Dens Park slope it was energy sapping for the Dark Blues.

United continued to press and McMullan was unlucky in the 81st minute not to increase the lead. Hazard’s excellent left hand save the only thing stopping McMullan’s first time effort from making it 3-0.

The last few minutes of the game had United show-boating as the players passed the ball around each other accompanied by cheers from the travelling Arabs. United’s dominance in the second half was convincing and the 2-0 score line could have been more. Dundee’s high ball tactics were easily dealt with by United’s defence and will have pleased Robbie Neilson. As referee Steven McLean blew for full-time the majority of home fans had headed out the doors, leaving United’s 4,000 supporters to roar as the game ended. United are now 6 points clear of Ayr United who play tomorrow, and 9 points clear of our city neighbours. A great night for the players and staff, and the travelling Arabs did themselves proud as usual.